'Pictorial Mappings of Islam and Modernity' is an exhibition mounted by the Berliner Festspiele in the Martin-Gropius-Bau that takes a contemporary look at Islamic forms of visual expression. The show focuses on three major themes: Calligraphy, Ornament and Miniatures. It places specimens of classical Islamic art in the context of modern and contemporary output in the fields of graphics, drawing, painting, photography, video art, installation, sound and sculpture. 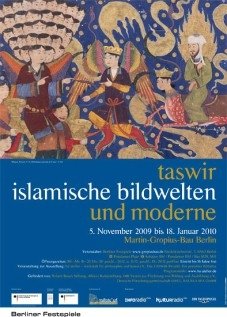 “Taswir – Pictorial Mappings of Islam and Modernity” is an exhibition mounted by the Berliner Festspiele in the Martin-Gropius-Bau that takes a contemporary look at Islamic forms of visual expression. The exhibition focuses on three major themes: Calligraphy, Ornament and Miniatures. It places specimens of classical Islamic art in the context of modern and contemporary output in the fields of graphics, drawing, painting, photography, video art, installation, sound and sculpture.

Calligraphy: The exhibition presents Islamic forms of writing primarily from a visual point of view and addresses the phenomena of writing, notation and movement. The emphasis is on the visual and performative aspects of writing as an art form in its own right. We will be showing classical exhibits of Koran manuscripts of the most diverse origins as well as Persian and Ottoman calligraphic sheets and sketch books dating from the 16th to the 19th centuries, which the exhibition contrasts with forms of artistic expression characteristic of European Modernism and contemporary artists from East and West, such as Pablo Picasso, Max Ernst, Maliheh Afnan, Etel Adnan, Wolfgang Laib, William Forsythe, Song Dong and Rebecca Horn.

Ornament: This section examines the basic geometrical figurations of ornamentation in architecture, interior decoration, and arts and crafts. Architectural drawings and textile patterns are displayed that reveal the cosmic, mathematical formal principle of the ornamental not only as a basic principle of architecture, but also as an ordering principle for society and state. The works of a number of critical contemporary artists, such as Mona Hatoum, Susan Hefuna, Parastou Forouhar and Hale Tenger, illuminate the ambivalence of hierarchy and order, perfection and power, symmetry and asymmetry, impotence and violence.

Imageries in miniatures and painting: The exhibition looks at the figurative imagery of Persian, Indian and Ottoman miniature painting in close association with poetry and literature, especially the great Persian epics about such famous pairs of lovers as “Yusuf and Zulaykha”, “Layla and Majnun” or “Khusraw and Shirin”. At the same time the imagery of the traditional “Miraculous Journey of the Prophet” and of Mogul painting indicates a migration of narrative forms that reveal biblical, Persian, Arabian and European influences, thus demonstrating the extreme openness of Islamic imagery.

Another section entitled “Prophet and Portrait / Who is Afraid of Representation” is devoted to the pictorial representation of Muhammad in Ottoman, Persian and Mogul book illustration in the light of contemporary works on the problem of the representability of the human face. The whole exhibition follows a poetic trajectory in which East and West, classical and contemporary trends, Islam and Modernism, come together in new ways. The curators create a vivid kaleidoscope of visual and acoustic references, different forms of artistic expression, and historical allusions. Following the Mnemosyne Atlas of the Hamburg art historian Aby Warburg, the exhibition shows traditional Persian, Arabian and Ottoman imagery against the background of contemporary artistic trends. It calls for a reconsideration of the practice of keeping “Orient” and “Occident” in watertight compartments while subjecting the roots of the traditional European view of the “West” to critical scrutiny.

Important national and international libraries and museums – such as the Hermitage in Saint Petersburg, the British Museum and British Library in London, the Bibliothèque nationale de France, or the Gulbenkian Museum in Lisbon and the Islamic Museum SMB – have made precious objects of Islamic art available as loans.

Over thirty artists from the international art scene have agreed to take part in the exhibition by showing important works, some of them for the first time in Germany (as of June 2009).

Timed to coincide with the exhibition, a richly illustrated catalogue of about 248 pages edited by Almut Sh. Bruckstein and Hendrik Budde will be published by Nicolai Verlag, Berlin, priced at about € 20.00.

Events connected with “Taswir – Pictorial Mappings of Islam and Modernity”: Organized by Ha’atelier – werkstatt für philosophie und kunst e.V., a series of high-powered workshops will be held in the Lichthof of the Martin-Gropius-Bau for the duration of the exhibition under the title “The TASWIR Project: A Portable Visual Atlas”, in which more than thirty artists and curators, musicians, scholars and intellectuals from all over the world will discuss and expand on the topics raised by the exhibition in a kind of Madrasah or place of public learning. This will constitute an artistic commentary on the exhibition, an ephemeral “exhibition in the exhibition”, an exploration of roads to knowledge in which the public will take constant part and whose content will be continuously documented in the exhibition itself. The programme of events – “The TASWIR Project: A Portable Visual Atlas” – will be produced by Ha’atelier – werkstatt für philosophie und kunst e.V., generously funded by the Robert Bosch Foundation, the Allianz Cultural Foundation, the Verein für Bildung und Fortbildung, and the Deutsche Forschungsgemeinschaft. Admission to the events is free.