Contemporary brazilian art, 1960s to the present. This exhibition, organized by the Museum of Contemporary Art Tokyo, features Brazil's creative vitality through the works of artists, fashion designers and architects. It highlights artists and creators who were part of, or inspired by Tropicalia, an artistic movement which arose in Brazil during the 1960s around the originality of the culture of people who live in the tropics. On show Beatriz Milhazes, Vik Muniz, Jum Nakao, Ernesto Neto, Rivane Neuenschwander, Ruy Ohtake and many others. Curated by Yuko Hasegawa 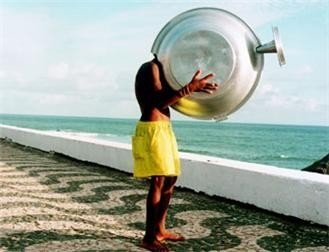 Yerba Buena Center for the Arts (YBCA) celebrates Brazil’s creative vitality through the works of artists, fashion designers and architects with the new exhibition When Lives Become Form: Contemporary Brazilian Art, 1960s to the present (Nov 5, 2009-Jan 31, 2010). The exhibition highlights artists and creators who were part of, or inspired by, ―Tropicália— an artistic movement which arose in Brazil during the 1960s around the ― originality of the culture of people who live in the tropics. Tropicália sought to escape the shadow of the European and US art world and create a uniquely Brazilian art culture.

―Tropicália represents a moment in Brazilian art exemplary for its Latin American modernity that subsequently influenced generations of artists including several notable Japanese Brazilians. When Lives Become Form, organized by the Museum of Contemporary Art Tokyo, captures this unique intersection of Latin American and Asian cultures which also takes place in California. The powerful work featured in the exhibition will hopefully delight audiences with its fresh and colorful aesthetic as well as offer them new perspectives on artistic production in a global context, says Betti-Sue Hertz, YBCA Director of Visual Arts.

Tropicália’s central figure is Hélio Oiticica who characterized the movement with his phrase, ―Being alive is art itself, which referred to the juxtaposition of Brazil’s thriving cultural scene during the mid- 60s alongside the country’s repressive political environment. As a political statement, artists such as Oiticica, Lygia Clark, and Lygia Pape, challenged artistic norms by combining representations of the necessities of everyday life with the dynamism of the megacities and the natural world. Their art focused on ways to make passive viewers into active participants in the world around them.

As with many artistic ideas that are alive and vital, subsequent generations internalize and individualize them in response to the conditions of their own lives. When Lives Become Form brings together five decades of work by cultural producers who have embraced the spirit of Tropicália’s original ideas. Highlights of the exhibition include sketches and documentation of Lina Bo Bardi’s architectural inventions; the presentation of one of Oiticica’s 1973 Cosmococa lounge spaces; Lygia Pape’s Wheel of Delights featuring porcelain bowls filled with brightly colored water which can be tasted by Gallery visitors; Beatriz Milhazes’s mural-sized colorful floral-inspired geometric design on the exterior glass wall of YBCA’s Grand Lobby; a large sculpture by Ernesto Neto hanging from the Grand Lobby ceiling; and a beautiful and compelling grouping of varied works by Marepe, including an installation of umbrellas and fruit baskets. The survey also includes several Brazilian-Japanese artists and creators including the legendary painter Tomie Ohtake, younger artists such as Rogério Degaki, and the fashion designer Jum Nakao.

Yerba Buena Center for the Arts (YBCA), located in San Francisco’s Yerba Buena cultural district, is one of the nation’s leading multidisciplinary contemporary arts centers. With a belief that contemporary art is at the heart of community life, YBCA brings audiences and artists of all backgrounds together to express and experience creativity. The organization is known for nurturing emerging artists at the forefront of their fields and presenting works that blend art forms and explore the events and ideas of our time. As part of its commitment to the San Francisco Bay Area, YBCA supports the local arts community and reflects the region’s diversity of people and thought through its arts and public programming.