1989: The End of History or the Beginning of the Future? 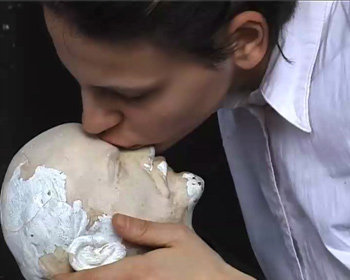 As its fall focus, the Austrian Cultural Forum presents the video-based exhibition 1989: The End of History or the Beginning of the Future? Featuring 14 films from international artists, the show will also include two panel discussions pertaining to aspects of repression and revolution, politics of memory, the fall of the Iron Curtain and the hopes and delusions connected to the alleged end of history.

1989: Twenty years ago, who would have dared to hope that the dictatorial regimes of Central and Eastern European communism would be swept away one after the other in the wake of mass protests? Within a few years, democratic constitutions and market economy structures were introduced. However, this process also caused pains, clashes and heated conflicts about the directions for the future and the interpretation of the past. The "annus mirabilis" 1989 became a historical mark from the perspective of ideology, culture, and mass psychology. Eric Hobsbwam´s "short twentieth century" came to an end. Even if most of the dividing lines within Europe have been dissolved by now, many borders still haven't disappeared in people's minds. Nationalistic ideologies, xenophobic and racist movements have surged alongside European integration and globalization. While new neighbors – long separated by the Iron Curtain – have begun to learn about each other, they have also started to experience new problems of migration and acculturation. The selection of films for 1989: The End of History or the Beginning of the Future? was guided by asking how artists, and in particular video artists, have reacted to these changes.

The fall of the Iron Curtain was more than a historical concept. It changed the personal lives of millions of Europeans. Anna Jermolaewa, for example, tells her story as a Soviet refugee. As young democratic activist she soon reached the limits of political freedom and had to escape to Poland and Austria in 1989. The same Polish woman who helped her journey to Krakow then left as well, to Paris. On the other hand, in his legendary film "Rejs" Marek Piwowski shows how normal people survived the harsh and cold rules of everyday communist life in Poland with irony and pragmatism.

The democratic revolutions happened unexpectedly. Marcel Odenbach's films deconstruct TV material, mostly from the German Democratic Republic during the collapse of the Berlin Wall, juxtaposing pictures of past violence with scenes of cheer and joy. He shows that repression and revolution are two sides of the same coin. Along a similar vein, Jonas Mekas and Harun Farocki with Andrej Ujica document the moments of change and the manipulative nature of TV and media. Through these works, it soon becomes clear that mass media continues to be a powerful tool in the hands of the new ruling classes.

In her film "Count on Us: Only Chorus" (2004) the artist Marina Abramovic conducts a children's choir singing a "hymn" to the UN in Serbo-Croatian as a symbol of understanding among nations. It was in former Yugoslavia in particular that hopes for a better and new world of brotherhood were brutally destroyed by the specter of nationalism, racism and war. The work can also be understood to unveil the cynicism of the post communist language surrounding the end of history.

Johanna Kandl was one of the first Austrian artists to react discursively to the transformation in Eastern Europe. Her snap shot paintings often confront language and reality: "Privatization" is one of the fashion words that continues to have both an influential and dramatic meaning for many.

Of particular relevance to the show are the many controversial legacies of communism. Politics of memory not only plays a major role in public discussions but also in culture, lifestyle and commerce. Many artists provoke debate about the authoritarian system of spies and denunciation and how this legacy is being interpreted in post communism: Joanna Rajkowska's video of the performance "Let Me Wash Your Hands" explores metaphorically the attempts of society to deal with a cloudy or even dirty past. It painfully reminds us of purification, guilt and amnesia. Magda Tothova's "Lenin and the Maiden" uses a satirical approach to false desires for a renewed golden age. By telling the story of the Budapest Freedom Square and the violent protests of the year 2006, the artist Csaba Nemes again points at the ugly face of nationalism. Politics of memory seem to be the focus for the interpretation of both the past and present political scene in Eastern Europe.

On the other hand, Thomas Draschan takes a close look at the transformed symbolic meanings of communism and socialism, where former aggressive messages of political change have developed into consumerist pop culture items.

Finally, artists like Pushwagner and Jakub Nepras unveil the concept of the alleged end of history as an illusion of our new era. Pushwagner's "Soft City" (picture novel 1968-1976, film 2006-2008) outlines a capitalist future of man's standardization which in its enforced conformity hardly differs from the communist past. In a similar vein, Czech artist Jakub Nepras tells the story of his arrival in the modern capitalist industrialized world. Nothing has changed. Human beings are still ants in comparison to dominant machineries and systems.

But time and again individual approaches and stories prevail. Austrian Isa Rosenberger takes a very personal look from the other side of a bridge in Bratislava that became a symbol of communist industrial progress. In the film "Novy Most," she meets a daughter, a mother and a grandmother, and lets the three women reflect upon the past in their own perceptions. The bridge thereby becomes a poetic symbol for a variety of hopes, disappointments and mostly unification. Finally Josef Dabernig's film journey crossing the Austrian – Czech border reminds us again of the forgotten common past – a poetic reflection about overcoming former frontiers and opposed systems.

Presented by: The Austrian Cultural Forum and the Kunsthalle Wien in cooperation with the Czech Center, the Hungarian Cultural Center and
the Romanian Cultural Institute

Image: Still from Lenin and the Maiden, Magda Tóthová, 2003

Thursday, November 5, 6 PM, Columbia University
As if Communism Never Happened?
The sneak peek of a large NY festival commemorating events in 1989 brings together intellectuals and artists to discuss the role of the performing arts in post-1989 Eastern Europe. What have been the driving forces illuminating and directing intellectual and cultural dynamics? How have communist-era legacies shaped intellectual and cultural practices? What role have artistic communities played in shaping society and politics?
With Jeffrey Goldfarb (The New School for Social Research), Elzbieta Matynia (The New School for Social Research), Robert Misik (journalist and writer). Moderated by Bradley Abrams (President of the Czechoslovak Studies Association).

The official opening reception takes place on November 11, 2009 from 6–8PM with the Minister of Foreign Affairs of the Republic of Austria, Mr. Michael Spindelegger.
To be followed by exhibition opening.
RSVP online at http://www.acfny.org