Sticking a Spike into the Vein of Memory. Quite a squad of soldiers has been holding the front line of Maximalism for the last 50 odd years. With the exception of that prick / mastermind Bruce Conner, the show focuses on practitioners from roughly three generations that made / make work in Los Angeles. This exhibition unleashes the dark twisted souls of 24 'Maximalists' featuring work by Paul McCarthy, Tim Hawkinson, John Altoon, Julie Becker, Bruce Conner, David Hammons, Mike Kelley, Ed Kienholz, Jason Meadows, Matthew Monahan, Jim Shaw... 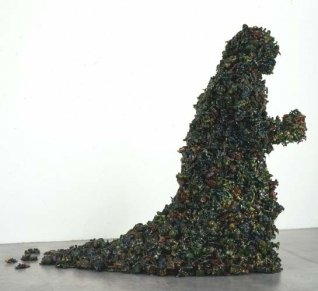 Quite a squad of soldiers has been holding the front line of Maximalism for the last 50 odd years. With the exception of that prick / mastermind Bruce Conner, the show focuses on practitioners from roughly three generations that made / make work in Los Angeles.

Those Geniuses at Ferus Gallery somehow created visual peace between Robert Irwin and Ed Kienholz. They define Maximalism antithetically to Minimalism as work that through an intuitive composing of materials at first appears to spiral out of control; but ultimately while flirting with compositional anarchy have a formal classicism. Jackson Pollock could be described as the first maximalist. In music it would be the Sex Pistols; literature, Bataille; cinema, Pasolini or Russ Meyers. Maximalism has survived disco Mohawks, flannel shirts and Britney Spears. Unlike their minimalist counterparts, this group derives no pleasure from the pink haze washing over sunsets, the azure color of the Pacific or the expansive desert. Darkness and claustrophobia doesn’t have the same sexy ring as “light and space.”

They are a loaded gun with a loose trigger stuffed absentmindedly in a waistband. The labyrinth of connections between these artists takes us from the most elegant formalism of composition to the darkest (humorous) possible recesses (and the recesses of recesses) of the human imagination. It is the gluttony of gesture, the intensity of image / material selection, the alienation / ignorance (is bliss) / disdain of East Coast didacticism.

Not all the artists presented drag us through the smoldering circles of the Inferno. Maximalists can have quiet contemplative moments where poetry and lawlessness coexist, their interaction with others, always quadraphonic. There is a profound romanticism to their work, the same romanticism that laces a lover’s drink with strychnine. Yes, there are brief moments of political commentary (yawn) but these seem motivated by a desire to extract the verse of a smashed windshield, sticking a spike into the vein of memory and allowing the viewer to enjoy the stunning apparition that tickles the brain.

This group is inward gazing, taking visceral odysseys that ignore / celebrate the taboo and treat it as essential / monotonous as water is to hydration; “I drew her thighs apart, and found myself facing something I imagine I had been waiting for in the same way that a guillotine waits for a neck to slice. I even felt as my eyes were bulging from my head, erectile with horror; in Simone’s hairy vagina, I saw the wan blue eye of Marcelle, gazing at me through tears of urine.”[1]

Every imaginable (and unimaginable) bodily fluid is disgorged through the galleries of Nyehaus. Walls tremble, neighbors move to evict, and the neighborhood rises in protest... that is if all goes according to plan.

[1] Georges Bataille, The Story of the Eye. Translated by Joachim Neugroschel, City Light Books, San Francisco, this translation by Urizen Books, 1977 originally published in France in 1928 as Histoire de l’oeil

Nyehaus is an exhibition space founded by devoted contemporary art collector and curator Tim Nye. In addition, Nyehaus commissions new works in order to expand and enliven the dialogue within an artist's oeuvre.

Located in the National Arts Club, 15 Gramercy Park South, 8D, Nyehaus is open by appointment from Tuesday through Saturday.