With over 300 works, this large-scale exhibition takes a fresh look at Surrealism as an international art movement involving major contributions from eastern Central Europe and it presents artworks from Paris and Prague. At the Wilhelm-Hack-Museum are dispayed works by Dali', Magritte, Ernst, Masson and Oppenheim, de Chirico, Bellmer, Fini and Brauner. The Kunstverein Ludwigshafen has focused exclusively on the medium of photography, featuring works by Man Ray, Brassai, Jindrich Styrsky and Emila Medkova, among others. 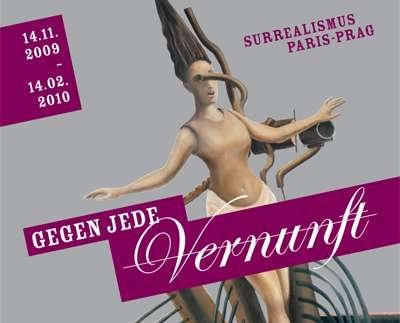 With over 300 works, this large-scale exhibition takes a fresh look at Surrealism as an international art movement involving major contributions from eastern Central Europe. The organisers, the City of Ludwigshafen and BASF SE, are not only showcasing major works at the Wilhelm-Hack-Museum by Surrealist artists such as Salvador Dalí, René Magritte, Max Ernst, André Masson and Meret Oppenheim, but also numerous works by artists such as Giorgio de Chirico, Hans Bellmer, Leonor Fini and Victor Brauner. Interesting new discoveries are waiting to be made by the visitor, in particular the works of Jindřich Heisler, František Hudeček, Mikuláš Medek, Jindřich Štyrský, Karel Teige and Toyen. The Kunstverein Ludwigshafen has focused exclusively on the medium of photography, featuring works by Man Ray, Brassaï, Jindřich Štyrský and Emila Medková, among others.

With Czech Surrealism placed centre stage for the first time in a major exhibition of this kind, and by encompassing works as late as 1969, one provides a unique viewpoint on the Surrealist movement. "Against all Reason" presents artworks from two major centres of Surrealism - Paris and Prague - and especially highlights the cross-genre connections between West and East. Thus for instance short animations by Jan Švankmajer, the celebrated Czech film maker, will be shown. Another highlight at the Wilhelm-Hack-Museum is Salvador Dalí's imposing 9x14 metre stage curtain "Bacchanal", exhibited for the first time in Europe.

With the full-scale reconstruction of part of the main gallery at the Surrealism Exhibition of 1938 at Galerie Wildenstein, the Wilhelm-Hack-Museum presents one of the highlights of Surrealist staging. The exhibition, largely conceived by Marcel Duchamp, showed works by famous Surrealists and turned the visitors' expectations upside down. Coal sacks hung from the ceiling, an artificial lily pond, the aroma of freshly ground coffee and the clamour of military parade ground - Duchamp united all this into an unforgettable sensual Gesamtkunstwerk. But the pièce de resistance was the lighting: the exhibition was lit solely by the visitors, who each received a torch on entering and thus became actors in their own right in this grand staging. The Wilhelm-Hack-Museum brings this experience back to life.

The exhibition at the Kunstverein presents around 180 photographic works. Here again artists from Paris and Prague will be brought face to face - for the first time in such a wide scope. Alongside classic works by Man Ray, Hans Bellmer and Brassaï, photographs by Eugène Atget, Claude Cahun, Dora Maar, Erwin Blumenfeld, Herbert Bayer and Herbert List will be displayed. Also featured are photographs by painters such as René Magritte. The Surrealist photo-artists were not concerned with making faithful reproductions of reality, but with casting the eye of desire behind the scenes, with discovering new, hidden, mysterious realities. They experimented with new techniques such as photomontage, solarisation, rayography, brûlage and multiple exposure. Beginning with familiar motifs, they conjured up strange, mysterious worlds. And in particular the women Surrealists, such as Medková and Claude Cahun, used the medium to establish themselves in the largely male-dominated art scene.

Art on the Borderline: "Surrealismus und Wahnsinn" ("Surrealism and Madness")

On 25 November the legendary Prinzhorn Collection in Heidelberg will open the accompanying exhibition "Surrealism and Madness" (26.11.2009 – 14.02.2010) featuring a total of 120 exhibits. This exhibition showcases works underlining the draw that the "aesthetic of madness" exerted on many Surrealist artists of their time.