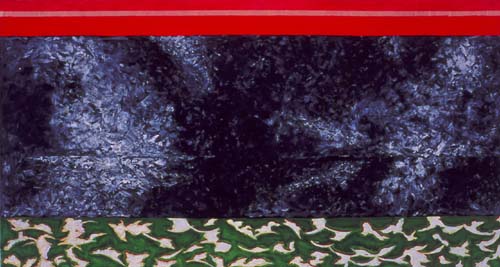 This summer the MalmÃ¶ Konsthall will host a major retrospective exhibition of one of the most significant artistries in contemporary Swedish visual arts. Until this year, 17 years had passed since Olle KÃ¥ks' paintings were shown in a major exhibition in Sweden.

This January, in cooperation with MalmÃ¶ Konsthall, the artist opened his exhibition at the Konstakademien (Royal Academy of Fine Arts) in Stockholm.
The long delay was due to the fact that he has been a professor since 1979 and from 1987 to 1999 he was president of the Royal University College of Fine Arts in Stockholm, a task which demanded his full attention. The exhibition in Stockholm has been a great success with both the critics and general public, with overwhelmingly positive reviews and large attendance figures. Olle KÃ¥ks allowed the former head of Sweden's National Art Museums, Olle Granath, to make a selection from the last three decades of the artist's work.
In doing so, Olle Granath used all the knowledge he has gained from an almost life-long friendship with the artist. MalmÃ¶ Konsthall administered and prepared the exhibition, which it will host this summer, when additional very large paintings will be included.

Olle KÃ¥ks has said that he paints because he has to. Not just for pleasure, but also from an inner compulsion. His pleasure in painting, the beauty and delight of the colours, and the voluptuous and erotic elements seduce and engage the viewer like those of the master, Matisse, of whom KÃ¥ks is an adherent.
Everything bears witness to a great love of painting. KÃ¥ks' belief in the painted picture as a form of expression has also enabled him, underneath the sensual surface of his paintings, to sometimes depict dangers to the acute observer, to portray horror and disgust and existential angst.
His openness to impressions and his ability to transform these impressions into pictures, his eagerness to experiment and his abundant imagination, his free relationship to art history's styles, of which a baroque pictorial approach can be glimpsed in his most splendid paintings, his fervently bold and exhilarated use of colour: all these elements correspond to his own character. This personality, along with his delight in decoration, may stem from his roots in Sweden's Dalecarlia region. In addition to Matisse, it is the richly decorated floral motifs of Dalecarlian folk artists and their playfulness with the forms and proportions of decorative elements that are grafted onto Olle KÃ¥ks.
Olle KÃ¥ks was born in Hedemora, Dalecarlia 1941. He lives and works in Stockholm and in the last years he has been a summertime resident of Scania.