'David Hockney, 1960-1968: A Marriage of Styles' revisits artist's formative years, beginning with his queer departures from Abstract Expressionism and culminating with his images of swimming pools and lawn sprinklers. Stark's exhibition begins in 2001, when imagery began becoming a consistent aspect of her collages, and ends with several works made for the exhibition, including 3 operatic kimonos that double up as soft sculptures of old fashioned dial-up telephones. 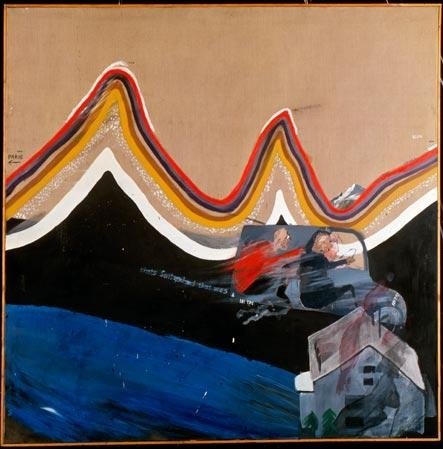 Nottingham Contemporary opens with solo exhibitions devoted to David Hockney's work of the 60s and to new and recent work by Frances Stark.

David Hockney, 1960-1968: A Marriage of Styles is the first exhibition to revisit Hockney's formative years in London and Los Angeles, beginning with his queer departures from Abstract Expressionism and culminating with his indelible LA images of sunbathers, shower scenes, swimming pools and lawn sprinklers. It comes at a time when younger artists and scholars are revisiting this work from new perspectives.

Stark's exhibition begins in 2001, when imagery began becoming a consistent aspect of her collages, and ends with several works made for the exhibition, including the artist's first sculptures for many years: three operatic kimonos that double up as soft sculptures of old fashioned dial-up telephones. The exhibition is baroquely entitled But what of Frances Stark, standing by itself, a naked name, bare as a ghost to whom one would like to lend a sheet? It tours in the New Year to CCA Glasgow.

Both exhibitions are accompanied by catalogues. The Hockney catalogue features essays by Andrew Brighton and Alex Farquharson, Director of Nottingham Contemporary and the exhibitions' curator; the Stark catalogue has essays by Mia Jankowicz, Francis McKee and Farquharson. Although they are distinct exhibitions, certain loose affinities can be found between them: visual and verbal irony; autobiographical encodings and an idiosyncratic treatment of the politics of identity; the recasting of literary voices as one's own (e.g. Whitman and Cavafy for Hockney and Dickinson and Gombrowicz for Stark); theatre as a performative metaphor for the ontology of the work of art, its relationship to the artist and the problems of display; Los Angeles as a way of life and state of mind.

They are accompanied by a succession of fortnight-long screenings of single films by Jennifer Bornstein, Morgan Fisher, Aurélien Froment, William E Jones, Mark Leckey and TJ Wilcox, selected to expand on ideas suggested by the Hockney and Stark exhibitions.

A number of artists have made works for our new building. Matthew Brannon has designed the cafébar, while Pablo Bronstein has designed a 21st Century take on the wunderkammer, which will serve as a space for four exhibitions at a time. Brannon, Anthea Hamilton, Wayne Koestenbaum and Jim Waters have curated the first four. Outside the building, Nottingham Contemporary is advertised by a nine foot neon sign and a large concrete bench based on logos S Mark Gubb and Loris Gréaud designed for the institution.

The public programme of talks and events is an important aspect of our first season. It includes a panel, featuring Stark, Brannon and Wilcox; a screening of A Bigger Splash introduced by its director, Jack Hazan, in conversation with Leckey and Stuart Comer; an exhibition walk-through by Michael Bracewell and Andrew Wilson; and a performative lecture by Koestenbaum on Lana Turner, Liberace, Hockney and Stark, which builds on his latest book Hotel Theory.

At 3000 square metres Nottingham Contemporary is one of the largest centres for contemporary art in the UK, housed in a landmark new building by Caruso St John in the centre of Nottingham, a short walk from the train station, with twice hourly connections to London St Pancras (1 hour 50 minutes). It is an international contemporary art centre with a strong local sense of purpose. We look forward to seeing you.

For more information, images or to be added to our press lists call Lynn Hanna or Vicky Godfrey on 0115 924 2421 or email vicky@nottinghamcontemporary.org