During the course of the 20th century, artists have extended the traditional boundaries of painting in a variety of ways. With over 60 paintings by more than 32 artists, the exhibition provides a comprehensive overview of the different techniques and conceptual approaches that characterise the style of painting which emerged from the early 1960s onwards. The show starts chronologically with Ad Reinhardt's Abstract Painting from 1961 and Konrad Klapheck's Das Kinderfraulein from 1964, one abstract, the other figurative. 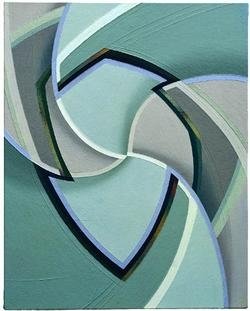 The exhibition Slow Paintings is devoted to the development of a highly involved form of painting as a continual strategy in the history of art, which emerged from the early 1960s onwards. With over 60 paintings and featuring no fewer than 32 artists, Slow Paintings provides a comprehensive overview of the different techniques and conceptual approaches that characterise this style of painting. The expanse of time invested by individual artists into the production of the paintings exerts its effect upon the visitor via the unique experience of sustained deceleration.

The exhibition starts chronologically with Ad Reinhardt's Abstract Painting from 1961 and Konrad Klapheck's Das Kinderfräulein from 1964-two paintings, one abstract, the other figurative. Ad Reinhardt's painting of a black cross on a black ground emphasises, with an amazing diversity of superimposed layers of coloured glazes, the meditative character of the painting itself, as well as the aspect of intense observation in this decidedly polyvalent work. Klapheck's portrait of a typewriter entitled Kinderfräulein shows the way in which the painting techniques of the Old Masters can also serve—precisely in the 20th century—an endearing, if disturbing description of a surreal pictorial world. John Currin’s Girl in Bed from 1993 connects with this idea in a 'trashy' way, whereas artists, such as Tomma Abts, Adrian Schiess, or Ekrem Yalçindağ, perpetuate the tradition of abstract painting in new ways.

During the course of the 20th century, artists have extended the traditional boundaries of painting in a variety of ways. Long-term projects, such as On Kawara's well-known Date Paintings or Roman Opalka’s Details, with its continuous series of numbers, have introduced the idea of the project into the realm of slow painting. Contrary to their conventional interpretation as sculptural works, Reinhard Mucha considers his wall vitrines to be paintings as well. This means consigning their tonal valency to a two-dimensional plane: the reverse glass painting of the frontal planes of glass and the internal reliefs, the bituminised felt board of 'found' floor coverings printed with various patterns, the zones of light and shade of the painted surfaces of the door leaves with their panels and the negative volume behind them filled with felt—all of these 'painterly' aspects are crucial here.

Recent figurative works by Alexander Esters and Sebastian Ludwig, developed especially for the exhibition, likewise explore the continuing delimitation of painting. Esters combines numerous, specially developed printing techniques using traditional components, whereas Ludwig sketches shapes onto canvases, which he then elaborately covers with tape, allowing the paint to flow over and behind the taped areas in a controlled process. These techniques presuppose a high degree of craftsmanship endowed with the power to captivate and fascinate the viewer both when scrutinising the motifs themselves and when reviewing the essence of the alchemistic means deployed.

On no account does the exhibition desire to foster a sense of competition between slow and fast painting. Instead, Slow Paintings is intent upon placing the emphasis on the special connection between conceptuality and elaborate composition, which entails a unique experience for the viewer: this isn’t merely concerned with extremely decelerated reception on the part of the viewer. More fascinating still is the apprehension of the way in which the complex ideas and the seemingly infinite number of layers of glaze resulting from this highly involved method are superimposed upon and, indeed, even conceal one another, ultimately surrendering the sharp, intellectual contours of their origin in favour of an unexpectedly rich, new physical identity. Slow Paintings shows us in ideal-typical manner the abundant potential and continual inventiveness of painting.

There will be a catalogue accompanying the exhibition published by the Verlag für moderne Kunst Nürnberg, edited by Markus Heinzelmann, 160 pages, hardback, 63 colour illustrations, with contributions from Heinz Knobeloch and Wolfgang Ullrich, as well as detailed artists' texts, ISBN 978-3-941185-99-9.