European premiere of Soy mi madre, the latest film by Phil Collins. Here the artist expands on these themes by using the format of the telenovela. Commissioned in 2008 by the Aspen Art Museum as part of the Jane and Marc Nathanson Dintiguished Artist in Residency Program, in this work Collins focuses on the Latino and immigrant populations of Colorado, a sizable percentage of which hail from northwestern Mexico. 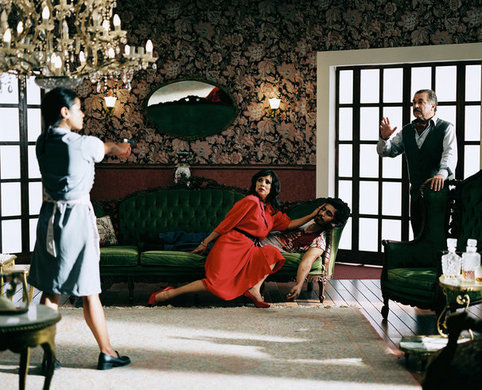 Victoria Miro Gallery hosts the European premiere of soy mi madre, the latest film by Phil Collins, in his second solo exhibition with the gallery.

Eliciting the complex and ambiguous relationship between the camera and its subject, Phil Collins’ work examines individual and collective systems of representation. Collins’ multifaceted practice is based on a close engagement with place and community, and has addressed issues of ethnicity, gender, and political and linguistic identity through participatory events often organised in regions of social upheaval. In producing these projects, which have ranged from castings to a dance-a-thon to press conferences, Collins appropriates aspects of the documentary tradition and fuses them with elements of popular culture to create tender, affectionate, and sometimes melancholic descriptions of humanity.

In soy mi madre, Collins expands on these themes by using the format of the telenovela. Commissioned in 2008 by the Aspen Art Museum as part of the Jane and Marc Nathanson Dintiguished Artist in Residency Program, in this work Collins focuses on the Latino and immigrant populations of Colorado, a sizable percentage of which hail from northwestern Mexico. In Aspen itself, this community figures mainly as a non-resident low-qualified work force, dispersed through a ring of satellite towns from which it commutes daily. At the same time alluding to and refuting the preconceived glamorous image of Aspen, Collins made a work in resonance with the cultural context of this specific population.

The telenovela is one of the most popular products of Latin America. It is a format that exploits the world market through the articulation and preservation of cultural difference, and at the same time serves as a powerful tool of self-representation and the re-signification of the continent’s colonial legacy. Shot in México City on 16mm film, soy mi madre is structured as a standard telenovela episode. The script, written by hired Hollywood screenwriters and supervised by the artist, is indirectly inspired by Jean Genet’s The Maids, a violent exploration of the intricate power dynamic that exists between unequals. Revolving around ideas of role-play and performance, masks and mirrors, symbols and rituals, The Maids posits social identities as volatile and unbalanced—a notion which soy mi madre also takes as its point of origin.

Filmed with some of Mexico’s leading television stars, and including the contribution of the acclaimed production designer Salvador Parra (Volver, Before Night Falls), soy mi madre is a study in the aesthetics and politics of melodrama. Having grown up on the social-realist tradition of British soap, Collins is drawn to melodrama for, in his own words, ‘its disruptive potential to address, within a highly predicated framework, some of the pains and dilemmas of the private sphere.’ With its distinct cinematic qualities and use of professional actors, soy mi madre appears a significant departure from Collins’ usual methods. Yet his motivation remains the same: our need to reflect upon the pressing concerns of the current political debate. His film can thus be seen as an oblique comment on questions of race, class, and social politics in the United States.

Phil Collins: soy mi madre will be published by the Aspen Art Museum later this year. Including contributions by Carlos Monsiváis, Mexico’s leading cultural analyst, Magali Arriola, writer and curator, and an in-depth interview with the artist by Aspen Art Museum director Heidi Zuckerman-Jacobson. soy mi madre was first exhibited at the Aspen Art Museum, Aspen, Colorado in 2008 and earlier this year at Tanya Bonakdar Gallery, New York. soy mi madre will feature in The Reach of Realism at the Museum of Contemporary Art, North Miami, 1 December 2009 – 14 February 2010, and will also be presented on local TV network in Aspen and in Collins’ solo exhibition at DAAD Galerie in Berlin in February 2010.

Background & Biography
Relating to performance-based and conceptual approaches to video and photography, the art of Phil Collins investigates the nuances of social relations in various locations and global communities. Collins employs elements of popular culture, and sometimes operates within forms of low-budget television and reportage-style documentary to address the camera as an instrument of both truth and deception. In recent years he has worked in places such as Baghdad, Belgrade, Bogotá, Jakarta, and Kosovo, repeatedly underlining the unpredictable transferences that occur between the producer, the participant, and the viewer.

Born in Runcorn, UK, in 1970, Phil Collins currently lives in Berlin. Recent solo exhibitions include Tramway, Glasgow (2009), Dallas Museum of Art (2007), Carnegie Museum of Art, Pittsburgh (2007), National Gallery of Canada, Ottawa (2007), San Francisco Museum of Modern Art (2006), Tate Britain, London (2006-07) and Wexner Center for the Arts, Columbus (2005). Collins has participated in group exhibitions including The Making of Art, Schirn Kunsthalle, Frankfurt (2009), Acting Out: Social Experiments in Video, Institute of Contemporary Art, Boston (2009), Life on Mars, the 55th Carnegie International, Carnegie Museum of Art, Pittsburgh (2008), and The Cinema Effect: Illusion, Reality and Moving Image, Part II: Realisms, Hirshhorn Museum and Sculpture Garden, Washington DC, (2008). He was nominated for the 2006 Turner Prize and was one of the recipients of the DAAD Scholarship in Visual Art for 2008/2009.