The artists selected for this year's inaugural prize are: Eun-me Ahn, Ceal Floyer, Seung-taek Lee, Robert Adrian X. The Nam June Paik Art Center Prize also comprises a group exhibition of the selected artists' work. The artists will be presented with their awards at the opening of the exhibition. 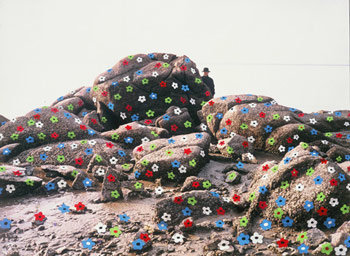 The Nam June Paik Art Center Prize, an international yearly award of 50,000 USD split among the winners, announces the recipients of its inaugural prize. The aim of the prize is to reflect on Nam June Paik's unique contribution to the field of artistic practice by recognizing artists that have operated within more embracing visions of technology, questioning unidirectional communication flows, and emphasizing the role of multiple levels of audience participation through practices that bridge together numerous areas, from dance to performance to art.

"For this year's inaugural prize we were hoping to select creative individuals who, like Nam June Paik, have been steadily pursuing their activities through a fusion of media and concepts that operates politically by refusing certainties in favour of the complex and ambivalent" Nam June Paik Art Center Director Youngchul Lee explains. "Impressively, although the artists work in diverse fields and media, the underlying edginess we had been hoping for is present in their practices and underpins how their works fit remarkably well together and with the legacy of Nam June Paik."

The artists selected for this year's inaugural prize are:

Eun-me Ahn, currently based in Korea after several years in New York, juxtaposes traditional elements from Korean culture with contemporary aesthetics. Her work offers a compelling combination of music, language and dance grounded in the body.

Ceal Floyer, Pakistan born British artist currently based in Berlin, combines everyday materials to play on the interaction between perception and expectation. Her work often translates into minimal multimedia pieces that inquire about the physical and conceptual spaces of art.

Seung-taek Lee, Korean born, has an innovative and diverse practice that questions established political, social and artistic values through work that pushes the boundaries of art and culture in a highly individual assimilation of cultural discourses associated to modernity.

Robert Adrian X, Canadian born, works in Vienna since 1972. Adrian X has been working on installations, music and radio projects, as well as works in public space since 1957. From 1979, he pioneered work in the telecommunication field.

"As the jury selecting the International artists for the Nam June Paik Art Center Prize, we were excited by this opportunity to contribute to this institution's mission of re-contextualizing the impact Nam June Paik's practice and life on contemporary art. Our selection of Robert Adrian X and Ceal Floyer represented a way of recognizing two artists who over the years have produced work that resonates with Paik's blurring of established boundaries to offer imaginative and conceptual potentialities for art.'