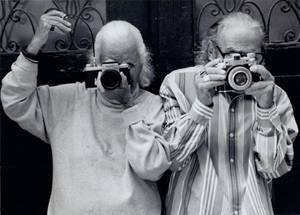 Lillian Bassman and Paul Himmel count among the masters of photography. The House of Photography of Deichtorhallen Hamburg prepares the first comprehensive retrospective of the artist couple. Besides the well-known photographs, published in "Vogue” and "Harper’s Bazaar”, yet unpublished photographs of the two artists will be exposed.

Today Lillian Bassman belongs to the last great woman photographers in the fashion world. In the 1940s and 1960s she worked as an art director for "Junior Bazaar” and later for "Harper’s Bazaar”, and promoted photographers, such as Richard Avedon, Robert Frank, Louis Faurer and Arnold Newman.

Paul Himmel (born 1914 as son of Ukrainian pilgrims; died in Feb. 2009 in New York) was one of the last great living photographers from the early era of American photography. He gained fame through his early exhibition "The Familiy of Man”, curated by Edward Steichen, which then turned around the world. In the mid-thirties, Lillian Bassman and Paul Himmel got married. Contrary to his wife, Paul Himmel increasingly lost interest in fashion photography. He began to develop his own projects, most of them radical experiments.

"For fifty years, Lillian Bassman has turned fashion pictures into art that celebrates the beauty and elegance of woman in body and soul."
Town and Country, 10.1997

"For a Therapist, the return of a ritty, Freewheeling Past, like his wife, the fashion photographer Lillian Bassman, Paul Himmel isn't much interested in the past."

Katharina Fritsch
The artist’s first comprehensive exhibition in Germany since the opening of k 21 in Dusseldorf 2001. This cooperation with Kunsthaus Zurich will be shown exclusively in Germany only at Deichtorhallen Hamburg.