In the context of europalia.china the museum will be holding the "Seeing One's Own Eyes" exhibition by the artists' collective MadeIn. Although the focus here is on contemporary art in the Middle East, most of all, the show reveals the paradox of 'looking' at other cultures. A comprehensive exhibition is dedicated to the first international artist's texts magazine Gagarin the Artists in their Own Words, it bring together the entire Gagarin oeuvre with a selection of works by the same artists from the museum collection. Ben Benaouisse will present a re-enactment of Jan Fabre's Bic-Art Room; the performance lasting 72 hours in which the artist had himself locked up in a white room lit by artificial lighting. 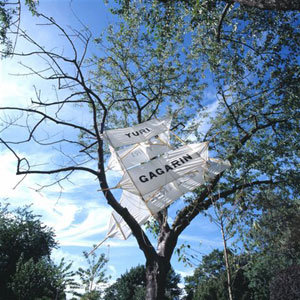 Gagarin the Artists in their Own Words
The first Decade

GAGARIN is pleased to announce that the Museum of Contemporary Art S.M.A.K in Ghent (B) opens a comprehensive exhibition, entirely dedicated to the first international artist's texts magazine GAGARIN the Artists in their Own Words. This unique exhibit will bring together the entire GAGARIN oeuvre with a selection of works by the same artists from the museum collection and special loans.

On January 9th, the Museum of Contemporary Art S.M.A.K. will also organize a special GAGARIN night with a/o readings by GAGARIN artists, a performance of his Voodoo-Faust (Crash Opera) by Manfredu Schu and a panel discussion with Simon Deakin, University of Leeds (UK), who is actually writing a PhD on GAGARIN, dr. J.D. Asja Szafraniec, author of the book 'Beckett, Derrida and the Event of Literature, Olaf Nicolai, artist, and Dr Jonathan Lehay Dronsfield, Reader in Theory & Philisophy of Art at the University of Reading (UK).

MadeIn
In the context of europalia.china S.M.A.K. will be holding the "Seeing One's Own Eyes" exhibition by the artists’ collective MadeIn. Although the focus here is on contemporary art in the Middle East, most of all, the exhibition reveals the paradox of ‘looking’ at other cultures.

MadeIn was established early in 2009 in Shanghai with the aim of stimulating the creation, support and dissemination of contemporary art. The founder of the collective is Xu Zhen (b. 1977, Shanghai), one of the most important conceptual artists who, since the 90s, has been active in a contemporary China that is rapidly evolving. Xu Zhen is dedicated to studying social, public and political processes, which he incorporates into his work in a way that is both theatrical and humoristic. In 8848 – 1.86 (2005) for example, the artist has made a valiant attempt to remove the top of Mount Everest and exhibit it as an archaeological object. More recently, Xu created an international fuss with The Starving of Sudan (2008), a reconstruction of the distressing situation the photographer Kevin Carter encountered in the Sudan in 1994, and which won him the Pullizer Prize. The visitor is given the opportunity to photograph the vulture and the dying child with his own camera. In "Seeing One's Own Eyes" the artist presents himself as the invisible brain behind the exhibition. Xu Zhen uses an extensive underground strategy to come with a project that breaks through cliché expectations of the contemporary art circuit, as the view of the Middel East and China is disrupted.

"Seeing One's Own Eyes" focuses on contemporary art from the Middle East. It offers a sample of what the Middle East aims to present in the field of contemporary art. This is expressed in a collection of space-filling installations, objects, sculptures, photos, paintings and video. The West mainly associates the Middle East with death and violence, human suffering and a continuing political and religious deadlock. Madeln’s aim is to counter this negative perception with an exhibition that focuses on a rich and flourishing art scene from this region. It presents us with surprising work, which remarkably extends beyond the context from which it originates. We see, for example, Perfect Volume, a circle made up of the tips of combat shoes. The shoes are silent; their owners have been killed. Another (two-dimensional work) DAH…DAH…DAH…DAH was cut out of a rusty sheet like a sound wave. Although it appears innocent, we see depicted the sounding board of speeches made by Middle East politicians – which leave the spectator ignorant about the persons in question let alone the message they are proclaiming.

MadeIn’s aim is not only to point a finger at social or political wrongs. It also reflects on the mechanism of the global contemporary art scene. "Seeing One's Own Eyes" portrays the paradox of ‘looking’ at other cultures but also denounces the frenetic search for originality.

With the support of Cattecontainers

Ben Benaouisse (b. 1971, Familleureux) is a dancer, performer, visual artist and especially difficult to place precisely under one of the abovementioned categories. In S.M.A.K. he will present the performance Jan Fabre revisited, a re-enactment of Fabre’s Bic-Art Room in 1981.

The Bic-Art Room by Fabre was a performance lasting 72 hours in which the artist had himself locked up in a white room lit by artificial lighting. Closed off from the outside world he was surrounded by white walls, a white ceiling and floor, white furniture, and white sheets on a white mattress. His only diversion was a blue Bic pen and the surrounding area served as a page. Words, sentences, scribbling, stripes, and slogans covered the space and killed time. A camera recorded the activities, boredom, hunger and sleep.

More than a quarter of a century later Ben Benaouisse re-enacts this performance in S.M.A.K.. Under exactly the same conditions – a white room, without daylight in which the artist is isolated for 72 hours with only a blue Bic ballpoint for diversion – the artist aims to re-experience Fabre’s experience. Although the sterile context provides him with no sensory stimulation Benaouisse regards this as a condition for exploring the limitations and possibilities of his creativity from scratch. The "drawing" is a way of killing time and the primary activity of an energetic being. Scribbling and writing are used as a survival strategy