Rembrandt and His Pupils

The exhibition explores the differences between Rembrandt's drawings and those of his most important pupils artists such as Govert Flinck, Ferdinand Bol, Gerbrand van den Eeckhout, Carel Fabritius and Nicolaes Maes, many of whose identities and artistic styles have been revealed and clarified by decades of research. On view are many of Rembrandt's most arresting sheets, as well as those of comparable beauty and importance by his students. Curated by Lee Hendrix and Peter Schatborn. 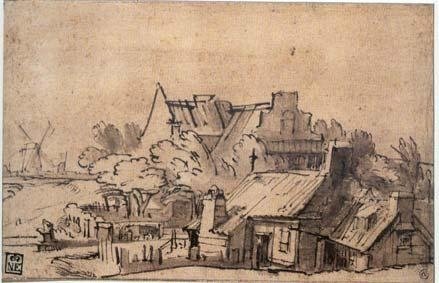 curated by Lee Hendrix and Peter Schatborn The J. Paul Getty Museum has organized an extraordinary exhibition, which is the result of more than 30 years of scholarly research on the working practice of the great Dutch artist Rembrandt van Rijn (1606–1669) and the teaching process he employed in his studio. Drawings by Rembrandt and His Pupils: Telling the Difference will be on view exclusively at the J. Paul Getty Museum at the Getty Center from December 8, 2009-February 28, 2010.

The exhibition will explore the differences between Rembrandt’s drawings and those of his most important pupils-- artists such as Govert Flinck, Ferdinand Bol, Gerbrand van den Eeckhout, Carel Fabritius, and Nicolaes Maes-- many of whose identities and artistic styles have been revealed and clarified by decades of research. On view will be many of Rembrandt’s most arresting sheets, as well as those of comparable beauty and importance by his students.

“Only a handful of artists have become so iconic that we refer to them by one name, and few have been hailed with more superlatives than Rembrandt,” says Michael Brand, director of the J. Paul Getty Museum. “I am pleased that the Getty Museum has organized this remarkable exhibition based on decades of research by leading scholars—bringing to Los Angeles Rembrandt’s finest drawings from around the world.”

For centuries, scholars have struggled to discern the difference between drawings by Rembrandt and those of his pupils. From the time of his early success in Leiden and Amsterdam, Rembrandt maintained one of the most active studios of the 17th century—with more than 50 students passing through during its nearly 40 years of operation. In the studio, Rembrandt’s numerous students imitated the master’s drawing style, rendering the same subjects that he did, drawing from the same models, and even accompanying him on sketching trips outdoors (as in the pair illustrated on page one by Rembrandt and Abraham Furnerius, in which the both artists drew the same site). Because his pupils drew so assiduously in his style, there was confusion about the authorship of the work – even immediately after his death.

Distinguishing drawings by Rembrandt from those of his pupils poses a special challenge because unlike paintings and prints, 17th century drawings were rarely signed and later attributions to “Rembrandt” were often incorrect. Over the past 30 years, however, scholars have developed and refined their methods, and have brought extraordinary clarity to this massive body of work. First, they identified core groups of drawings, often preparatory to paintings or prints, which can be confidently attached to Rembrandt or to different artists who studied with him. These core groups provide the standard against which more questionable attributions can be tested by closely investigating characteristic visual traits. These visual traits comprise an artist’s style—the handling of line, the description of space and volume, the evocation of light, and the rendering of expressions and gestures. The once amorphous body of drawings regarded as “Rembrandt” has yielded many newly differentiated artistic personalities.

The difference between Rembrandt’s artistic personality and those of his pupils is highlighted by the exhibition’s organization as a series of carefully selected pairs of drawings. These pairs, with Rembrandt typically on the left and the pupil on the right, depict the same or similar subjects and usually date to the period when the pupil studied or worked with Rembrandt, taking the visitor on a chronological tour through Rembrandt’s studio, from its earliest days to the end.

This journey begins with Rembrandt and Jan Lievens (1607-1674), the only artist in the exhibition who was not Rembrandt’s pupil, but rather his close, early artistic compatriot in their native city of Leiden. In their beautiful, moving early drawings, which are very close in style, Rembrandt and Lievens originated the subject of elderly men and women that would become so widespread in Dutch 17th-century art. After Rembrandt moved to Amsterdam in 1631 his teaching moved into high gear and he took on a steady stream of talented and uniquely gifted pupils, many of whom went on to become famous artists themselves.

Govert Flinck (1615-1660) entered Rembrandt’s studio in about 1635. The Rembrandt and Flinck pairings within the exhibition includes powerful studies of a famous Amsterdam actor and moving biblical narratives. Ferdinand Bol (1616-1680) came to study with Rembrandt in about 1637. The Rembrandt and Bol group includes portraits and a beautiful pair of studies of the Annunciation. Another of these earlier pupils, Gerbrand van den Eeckhout (1621-1674) was one of the most talented and versatile draftsmen to come out of the studio. Rembrandt made a few spectacular brush drawings, which greatly influenced Van den Eeckhout as he went on to make his most celebrated sheets.

In the 1640s and 1650s, a diverse group of pupils studied with Rembrandt, including Abraham Furnerius (ca. 1628-1645), Carel Fabritius (1622-1654), Nicolaes Maes (1634-1673) and Constantijn Daniel van Renesse (1626-1680). Furnerius was exclusively a landscapist and his drawings indicate that he accompanied Rembrandt on sketching trips in and around Amsterdam. Carel Fabritius, one of the most famous and beloved painters to come out of Rembrandt’s studio, is almost unknown as a draftsman until now. The exhibition will include several impressive drawings newly attributed to him. Maes further developed and popularized the “Rembrandtesque” theme of old women, which will be featured in the Rembrandt and Maes pairings in the exhibition. Van Renesse is especially interesting for being the only amateur draftsman documented as studying with Rembrandt. His drawings are especially revealing because Rembrandt himself corrected them, which in turn yields insight into Rembrandt’s teaching methods.

Studying the nude in life drawing sessions emerges as an important theme in Rembrandt’s late studio work. Among the most spectacular pairs in the exhibition is one depicting seated female nudes by Rembrandt and his late pupil, Arent de Gelder (1645-1727). Both drawings show the same model but from different vantage points, and recent observations about the handling of light, shadow, and line enable us to distinguish Rembrandt’s drawing from that of De Gelder, which at one time was also thought to be by Rembrandt.

The controversy surrounding the authorship of works of art by Rembrandt and his pupils can be mystifying to all but specialists. Opinions about authorship have often been delivered with little explanation as to the method used for arriving at them. The subtitle of this exhibition – Telling the Difference—emphasizes its goal of showing visitors what to look for in order to enable them to understand the methodology for themselves. Details of the drawings are highlighted and reproduced on labels, which also use clear and precise terms to describe differences. Various other tools are available throughout the exhibition, so that gradually visitors will be more and more confident and proficient at “telling the difference” on their own.

Covering its nearly 40 year span and fifteen pupils, the exhibition offers what may be the most comprehensive coverage of the Rembrandt studio ever attempted. Visitors will come away with a rich experience of the studio’s workings, as well as a better understanding of the issues of authorship. Visitors will also confront the massive and recent changes in scholarly understanding of these drawings, with over 70 of the more than 100 drawings in the exhibition either currently or formerly assigned to Rembrandt.

Because of their fragility, and the importance of drawings by iconic artists such as Rembrandt, it is often difficult to secure loans for exhibitions. However, colleagues at institutions in America and abroad understood the significance of this exhibition, and the Getty received an unprecedented number of loans from the world's greatest collections of old master drawings. The Museum is profoundly grateful for the more than 100 drawings being generously lent by 33 institutions, including the British Museum, London; the Rijksmuseum, Amsterdam; the Musée du Louvre, Paris; the Kupferstichkabinett, Berlin; the Szépmüvészeti Múzeum, Budapest; the National Gallery of Canada, Ottawa; the National Gallery of Art, Washington, D.C.; the Art Institute of Chicago; the Pierpont Morgan Library and Museum, New York; and several private collections in Europe and America. The exhibition will also include six drawings from the Getty’s own collection.

Drawings by Rembrandt and His Pupils: Telling the Difference is organized by the J. Paul Getty Museum and curated by Lee Hendrix, the Getty’s Senior Curator of Drawings and Peter Schatborn, Emeritus Head of the Rijksprentenkabinet of the Rijksmuseum, Amsterdam. The exhibition will also be accompanied by a fully illustrated catalogue, which will summarize the extensive research in a concise, accessible, and visually compelling volume. The catalogue has been prepared by an international team of experts—Dr. Holm Bevers, Curator of Netherlandish Drawings and Prints of the Berlin Kupferstichkabinett and Dr. William W. Robinson, George and Maida Abrams Curator of Drawings, Harvard Art Museum/Fogg Museum, as well as Hendrix and Schatborn.

This landmark exhibition will take place only at the Getty and will be the subject of a symposium open to the public (reservations required) on February 2, 2010. Consult the Getty website for lectures and other related programs.