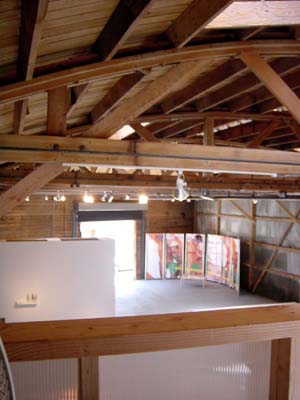 "Not to find one's way in a city may well be uninteresting and banal. But to lose oneself in a city--as one loses oneself in a forest--this calls for quite a different schooling."
Walter Benjamin: A Berlin Chronicle, 1932

Berlin based curator Jens Hoffmann has been invited to curate an exhibition during the summer months of 2002, in The Project's recently opened Los Angeles space, that will related to the idea of exploring a totally unknown territory. Hoffmann, only been in Los Angeles for short visits, will investigate, over the period of the exhibition, the diverse cultural and artistic scenes of Los Angeles. At the same time, the exhibition aims to present a curatorial strategy that reacts towards the increasing deficiency of time in regards to curatorial research and the questionable concept of long term exhibition planing as the research and the development of this exhibition will only begin with the first day of the show.

Day by day the large space of The Project will be filled with more and more art works found in the research. Consequently, the research will in fact be the exhibition and the exhibition the research. Besides the works of art, that will be the central element of the show, the exhibition will include, in an interdisciplinary manner, various other forms of artistic articulation such as performances, lectures, concerts, etc. and some that are not even necessarily part of the exhibition in the space but formulate extensions into the real space of the city i.e. other exhibitions, TV or radio stations, art schools, etc. The opening of the show is therefore practically every day a new work is installed or a new element taken in. By conceptualizing the making of an exhibition, the show tries to propose a different notion on how exhibitions can gain form: growing over the period of several weeks the show emphasizes the dynamics of time and advocates an artistic and curatorial practice that privileges process over finished product.

Gallery hours of operation are Wednesday through Saturday 11-6 PM. The Project is located at 962 East 4th Street. The entrance is off of Hewitt Street, between 4th and 5th, three blocks east of Alameda.