Simona Di Lascio, Stephanie Custance and Alexine Chanel. In this exhibition, three international female artists expose ways in which Western society is longing for, even hungry for, a 'Clan' of its own. 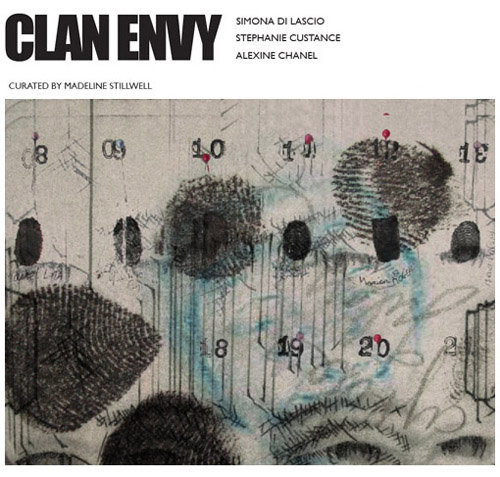 Clan : the principal and original social unit.
Envy : a longing to possess something achieved by another.

In this exhibition, three international female artists expose ways in which Western society is longing for, even hungry for, a ''Clan'' of it's own. Simona Di Lascio, Stephanie Custance, and Alexine Chanel invert, reverse, and ultimately cancel out connotations of being jealous of the ‘other’, while they raise questions concerning the social and the individual. Whether it is another’s femaleness, maleness, or clan-ness, these artists suggest that our global ‘self’ is currently in search of a global ‘society’ and vice versa.

Italian artist Simona Di Lascio paints images of contained happiness: female faces caught in expressions that are at once suppressed and composed. These women act like dated advertisements—congenial and forever smiling, as though they’ve been meticulously trained to maintain an appearance of social status. And yet, somewhere behind the smile there is a severity seeping through the cracks—a classiness and a danger alike, reminiscent of a family photo of a once-youthful grandmother. Or in the words of the artist, “like a big stain on an old wall, if you look at it long enough you can see the face of a devil and a saint.”

French artist Alexine Chanel’s obsessive collection of human fingerprints calls into question identity through the lens of the scientific model. Her social and biological ''research'' ultimately exposes things like social privacy, public intimacy, assimilation, order, and paranoia. In the current political arena of fraud, credit crisis, and surveillance, our capitalist business model has hung its dirty laundry out for all to see. In a similar way, Chanel exposes the individual by marking a primal record of her specimen’s rebellion toward, or surrender to, the “system.” Whether or not her specimens participate, her mark-making uses the most unique and perhaps most private part of one’s body: one’s fingerprint—and transforms these tiniest of privacies (actual-sized fingerprints) into the vastness of a universe (large-scale video-projections).

American artist Stephanie Custance’s imagery presents individualism within a whole. Faces within faces show the self as a mirror of possibly every other ''self” that’s ever existed. Each face is locked into the next through a shared eye, implying an undeniable connection to ancestry and to the past. Memory and loss layer the work with not only what is seen, but what is not seen. Reminiscent of long-forgotten scars of civilization, such as the Colonistic slaughter of Native populations across the globe, Custance’s drawings reveal the mystery that is the self: we are never only what we think we are, for we have unknown connections to unknown forces. Yet we are never only what we are conditioned to be, since the very social models we learn to accept as 'truth' are in constant states of flux and growth.

At the dawn of 2010, we’ve recognized that Capitalism isn't working any more. Perhaps Western society is looking at the primitive model with new eyes, with a bit of ''clan envy.''