Neither Coming Nor Going. The exhibition features Rulai, a monumental Buddha and recent large-scale works on paper based on the 7th-century Chinese prophecy book Tui Bei Tu. Using ink, paper handmade from the bark of Mulberry trees, and in some works feathers to build up the surface, Huan depicts animals and landscapes in the series of unique works on paper. The show follows the debut of his newly conceived Handel opera, now scheduled to tour China in 2010. 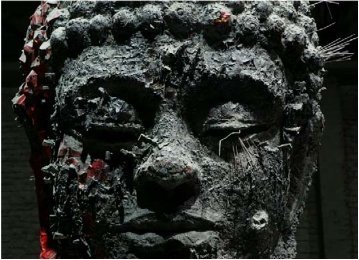 Following the critically-acclaimed September premiere of Semele, a new production of George Frideric Handel’s opera directed and designed by Zhang Huan and presented to audiences at The National Opera of Belgium in Brussels (scheduled to tour China in 2010), the artist will be the subject of his second solo exhibition at PaceWildenstein.

The compacted ash surface of Rulai, supported by an internal metal frame, is heavily embedded with miniature porcelain Buddha relics, copper offering dishes, miniature skulls and unburned joss sticks. The strikingly beautiful grisaille palette of the sculpture is sharply contrasted with blood red paper wrappers, clustered around the crown and face of the deity. Burning incense pours out from Buddha’s head, activating a traditionally static art form with performative aspects, one of the artist’s hallmarks.

Using ink, paper handmade from the bark of Mulberry trees, and in some works feathers to build up the surface, Zhang Huan depicts animals and landscapes in the series of unique works on paper included in this exhibition. He references the celebrated 17th-century Chinese painter and calligrapher Bada Shanren as well as Tui Bei Tu, a seventh-century Tang Dynasty prophecy book which reappeared in second-hand book stores in China in the 1990s after being banned by the Communist party. Tui Bei Tu offered an alternative to traditional Eastern and Western systems and presented insight into China’s future, utilizing drawings and poems to prophesize a sequence of sixty events.

Zhang Huan is widely regarded as one of the most vital, influential and provocative contemporary artists working today. His early performances were conceived of as existential explorations and social commentary, and to some degree, the layers of ideas explored in these pieces have carried through to his more traditional studio practice, which he embraced upon moving to Shanghai in 2005, after living and working for eight years in New York City.

In addition to the debut this year of Semele, which will be the first full-length Baroque opera to be performed in China next year, Zhang Huan was the subject of a comprehensive monograph published in 2009 by Phaidon Press as part of their “Contemporary Artists” series. Yilmaz Dziewior, director of the Kunstverein in Hamburg, and Robert Storr, Dean of the Yale School of Art, contributed essays, and an in-depth interview with the artist, conducted by curator and critic RoseLee Goldberg is also included.

Zhang Huan was born in 1965 in a small town called Anyang in Henan Province just prior to the Cultural Revolution. At one year of age, Zhang Huan went to live with his grandparents in a tiny village in the countryside known as Tangyin County. At fourteen, he started his artistic training in the so-called Su-style or Soviet style and traveled by bus each day for his lessons. Zhang enrolled in undergraduate studies at the Art Department, Henan University, Kaifeng to concentrate on Chinese ink painting, drawing, oil painting and art history in 1984. Upon completion in 1988, Zhang was an instructor of art and Western art history at Zhengzhou College of Education for three years. He studied oil painting at the Central Academy of Fine Arts in Beijing from 1991 to 1993, and it was during this period that he first started experimenting with performance art.

At the same time, a group of young Chinese artists, including Zhang Huan, established the Beijing East Village. It was in this community that Zhang developed his early performance practices and many of the works that would soon bring him international attention, such as 12 Square Meters, in which the artist sat for an hour, covered in honey and fish oil, in a fly infested public latrine and To Add One Meter to an Anonymous Mountain, where nine people lay on top of one another to raise the summit by a meter. These performances and many others came to be known by their photographic documentation, which are now considered the artist’s first iconic works.

In 1998, Zhang Huan was included in Inside Out: New Chinese Art organized by Asia Society and P.S.1 Contemporary Art Center. It was during this exhibition that he relocated to New York City. Over the course of the next eight years, Zhang Huan created 13 performances and exhibited in five solo exhibitions and more than 60 group shows throughout the United States. The artist moved back to China in 2006, settling in the southern Min Hang district of Shanghai, where he opened the Zhang Huan Studio and established a Foundation.

Among his many notable exhibitions the Asia Society, New York, presented Zhang Huan: Altered States (2007-08), the largest museum exhibition of the artist’s work to date. Organized by Melissa Chiu, Director of the Asia Society Museum and Vice President of the Society's Global Arts Programming, the exhibition featured 55 of Zhang Huan’s major works produced over the past 15 years in Beijing, New York, and Shanghai. Zhang Huan: Altered States later traveled to the Vancouver Art Gallery.