Jasper Rigole presents his new work 'Outnumbered, a brief history of imposture (2009)', a new audiovisual installation which - like Paradise Recollected - comments on the effect of documentaries, 'fact fiction' and popular scientific equivalents. The S.M.A.K. also presents the installation 'Ghost Shift' by video and installation artist Stefaan Dheedene. Concretely, the installation consists of a big wooden display case with a circular saw machine, a photocopier and sawdust set up inside. 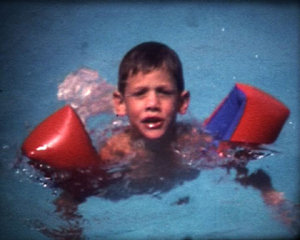 In the context of the AON Award 2008, S.M.A.K. will be presenting new work by the Laureate Jasper Rigole (b. 1980).
The artist received this award for Paradise Recollected (2008) – a film he presented with the closely related installation, an elementary taxonomy of collected memory (2008), as his final year project at the Higher Institute for Fine Arts (HISK). Paradise Recollected is a film compiled and distilled from ‘found footage’ in archive material from the International Institute for the Conservation, Archiving and Distribution of Other People’s Memories (IICAVAH)). This institute, founded on 28th June 1980 by Jasper Rigole, is focused on the memories, found or lost, of others. Concretely, the IICAVAH archive mainly comprises 8mm films that have been found, forgotten and thought to have been lost. The images – mostly amateur recordings of holidays, family celebrations or family outings – were once made ‘to be remembered’ but over the years have found their way to attics, basements, flea markets and so on. Paradise Recollected, an essay of compiled images, brings together memories and merges them into a new parallel world founded on the collective memory of the spectator and thus offers him an escape route to the fantastic ‘land of Cockaigne’.

Jasper Rigole will be presenting new work in the S.M.A.K.. OUTNUMBERED, a brief history of imposture (2009) is a new audiovisual installation which – like Paradise Recollected – comments on the effect of documentaries, ‘fact fiction’ and popular scientific equivalents. Through an encyclopaedic approach and quasi scientific precision the artist examines concepts like authenticity and objectivity. The result is an apparently detailed study of the history of falsification. OUTNUMBERED, a brief history of imposture examines both man’s need for ‘conclusive’ stories and the question whether anecdotes ‘fictionalise’ history.

Since 2006 AON Artscope awards an annual art prize to the value of 5,000 euro to a HISK Laureate. Following Cédric Noël (2006), Cindy Wright (2007) and Filip Vervaet (2008), Jasper Rigole has been awarded the prize for 2009. AON Artscope is a branch of AON Belgium, which is specialised in insuring works of art.

The S.M.A.K. presents the installation Ghost Shift by video and installation artist Stefaan Dheedene. Concretely, the installation consists of a big wooden display case with a circular saw machine, a photocopier and sawdust set up inside. On a pedestal next to the display case there are irregularly cut pieces of wood and a stack of A4-sheets of which the reverse side is white, the front side a variable series of white to almost completely black.

The above-mentioned set-up is the residue of a series of events that came before: Stefaan Dheedene activated – not alone but with two – the props. The artist set to work with wood and circular saw in order to saw blocks of wood as small as possible. Meanwhile his companion in the same display case copied a white A4-sheet of paper over and over again. Each copied page was in turn copied until a quasi-completely black sheet rolled out of the machine. Sawdust in time became the ‘image determining’ jammer.

Ghost Shift is presented by the S.M.A.K. as if it were a dusty machine left behind in a factory. Production is down, the products are lying there as silent witnesses.