Third and final phase of exhibitions and programming 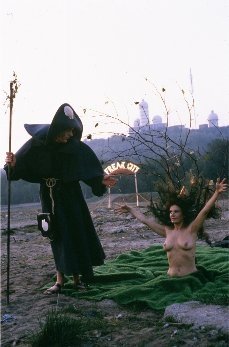 X Initiative is pleased to announce its third and final phase of exhibitions and programming, which will open to the public in two stages, on November 21st and December 10th. These exhibitions will be the culmination of X, an experimental non-profit initiative that opened in March 2009 and that will end its programs in February 2010. Phase 3 will feature solo shows by Hans Haacke and Artur Zmijewski, the group exhibition Ecstatic Resistance, and In Numbers, a presentation of artists’ serial publications. Belonging to different generations and following individual styles and agendas, the participants in these four exhibitions manifest an attitude of resistance and friction against social conventions and common assumptions. Each in their own personal way, they explore the deepest folds of human behaviors, investigating radical conflicts while positing new possible solutions.

Opening November 21st:
HANS HAACKE, Weather, or not
On the fourth floor of X Initiative, New York-based artist Hans Haacke will present his first solo exhibition in a New York institution since 1986. The artist will display reinterpretations of some of his historical works along with new pieces conceived for this presentation. Weather, or not will combine large-scale kinetic installations, photographs, and text-based works in a dramatically experiential environment. The show will address political issues of the present and natural processes that the artist has been exploring for over 40 years. Haacke has taken a wide variety of approaches to core issues such as economics, politics, and ecology. His work combines fundamental critical positions with radical gestures, which make his practice even more relevant today. Some of his interventions have led to disputes extending well beyond those of the art world and its market, as in 2000, when a large work by the artist, commissioned by the German Parliament, was permanently installed at the Reichstag in Berlin only after a heated national debate.
Hans Haacke (born Cologne, 1936) had major solo exhibitions at Tate Gallery, London (1984), New Museum of Contemporary Art, New York (1986), Centre Georges Pompidou, Paris (1989), Venice Biennial, German Pavilion (1993), Serpentine Gallery, London (2001), Akademie der Künste, Berlin/Deichtorhallen, Hamburg (2006). His works were exhibited at Documenta (1972, 1982, 1987, 1997), Skulptur Projekte, Münster (1997), and the Biennials of Venice (1976, 1978, 2009), São Paulo (1986), Sydney (1984, 1990), Tokyo (1970), Johannesburg (1997), Gwangju (2008), and the Whitney Biennial, New York (2000). With Nam June Paik he was awarded a Golden Lion for best pavilion at the Venice Biennial in 1993.

ECSTATIC RESISTANCE
On the third floor, X Initiative will present Ecstatic Resistance, a group exhibition organized by New York- based artist Emily Roysdon. Included are works by more than ten international artists and performers who embrace the occurrence of pleasure within the realm of the political and who challenge the vernacular of resistance. The exhibition questions the limits of the impossible and focuses on strategies that re-imagine the representation of power. Ecstatic Resistance is a project that has taken a variety of forms–texts, performance, exhibitions and objects.
Participating artists: Rosa Barba, Yael Bartana, Juan Davila, Sharon Hayes, Xylor Jane, My Barbarian in collaboration with Liudni Slibinai, Ulrike Muller, Jeanine Oleson, A.L. Steiner, Joyce Weiland. Performances by: Leah Gilliam, Sharon Hayes, Matthew Lutz-Kinoy, Jeanine Oleson and Julianna Snapper, Dean Spade and Craig Willse, Wu Ingrid Tsang, Zackary Drucker, and Mariana Marroquin, and Ian White.
A related exhibition is on view at Grand Arts in Kansas City, MO through January 16th, 2010. http://www.grandarts.com

ARTUR ZMIJEWSKI, Democracies, Game of Tag, My Neighbors, Repetition, Singing Lesson 1, Them, 80064
Artur Zmijewski will exhibit a selection of his groundbreaking videos on the second floor of X, offering to the American public the first large-scale presentation of his work to date, which coincides with his participation in the Projects series at the Museum of Modern Art, New York, on view through February 2010. Ranging from social experiments to crude documentaries, from investigations of complex moral issues to descriptions of everyday conflicts, Zmijewski’s videos sketch a multifaceted fresco of humanity, depicted with the cold eye of a documentarian and the piety of a passionate witness. The first ever American mid-career survey of this artist, the exhibition will also feature the US premiere of one of his most ambitious works to date, Democracies, a video installation composed of 20 monitors documenting public events and protest scenes from around the world from various political credo. Images of rallies, strikes, and uprisings are combined with footage from reconstructions of historical events, parades and funerals of controversial political leaders.
Artur Zmijweski (1966, born in Warsaw) represented Poland in 2005 at the 51st Biennale in Venice. In 2007 he participated at Documenta 12 in Kassel as well as at the second Moscow Biennale of Contemporary Art. Zmijewski’s work is also currently on view at the Museum of Modern Art with “Projects 91: Artur Zmijewski“ where he is premiering the video Swiecie 2009.

Opening December 10th on the Ground Floor:
In Numbers: Serial Publications by Artists
This exhibition represents the first serious effort to define a neglected art form—the serial publication. Artists have long seized on magazines and postcards to create new kinds of art, often the most avant- garde of its time. The exhibition will survey these works—from Wallace Berman’s Semina through Eleanor Antin’s 100 Boots, Robert Heinecken’s modified Periodicals, the Japanese Provoke group, to Raymond Pettibon’s Tripping Corpse and Maurizio Cattelan’s Permanent Food—and will offer a glimpse of rare works by Continuous Project, and a special appearance by North Drive Press. These works have had a profound effect on a diverse range of contemporary artists—such as Terence Koh, Tom Sachs, Scott Hug, and Roni Horn—who have embraced the form and contributed to an explosion of new artists’ publications. The fully illustrated 450-page reference book, In Numbers: Serial Publications by Artists Since 1955, edited by Andrew Roth and Philip Aarons documents the histories of 60 such publications, alongside completely illustrated bibliographies by Victor Brand with essays by Clive Phillpot, Nancy Princethal, and William S. Wilson, and an interview with Collier Schorr to provide historical context.
Copies of In Numbers will be available for purchase at Artbook@X during the exhibition.

About X Initiative
X is a not-for-profit initiative of the global contemporary art community that will exist for one year and present exhibitions and programming. Advised by a 50+ advisory board comprised of artists, curators, museum professionals, gallerists, collectors, art historians and critics, X is reaching across traditional boundaries to form a consortium interested in responding quickly to the major philosophical and economic shifts impacting culture. X will feature durational artist interventions, site-specific projects, historical in- depth exhibitions, one-night performances, lectures and weekly events. Questions posed in the form of programming will address relevant and pressing issues pertaining to the changing landscape of contemporary art.