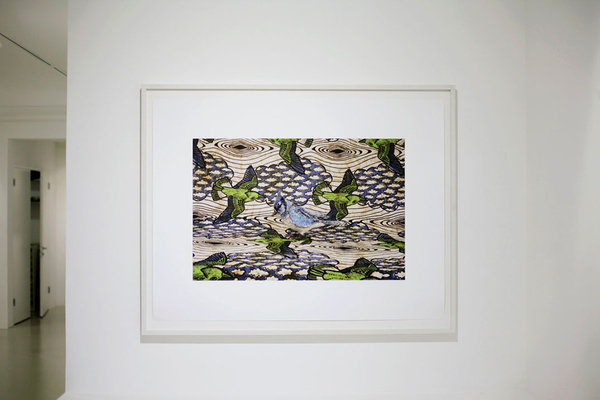 Anne Chu (*1959) and Paul Bloodgood (*1960) both live and work in New York City, while Peter Emch *1945) lives and works in Zurich. Chu and Bloodgood show the result of their most recent understanding of representing landscape – their small size paintings were all created in 2009. In his small drawings with their subtle colors Peter Emch opens up a world of miniature narratives. As an entity they introduce a cosmos of modest and tender comments about the way we live now – in our relationships and in the spaces around us. At the same time as in the gallery Peter Emch also shows at the Swiss Federal Institute of Technology / Collection of Prints and Drawings – http://www.gs.ethz.ch/english.html

"In the basis of Chinese calligraphy and painting, the conception of a word or object is held visually in the line it forms. There is no translation between one and the other, the words or drawings become their meaning: from concept to line to thing. My continuation of this has been to paint and sculpt as if there is no delineation in two and three dimensions.

These particular paintings are from a series responding to the "Song of Songs," from the Old Testament. This text is the story of the consummation of love between God and Israel. My interest is in comparing differences in the portrayal of sensuality between western and eastern sensibilities, and finding a language between the two that lies in a non-gendered voice. These paintings are landscapes taken from cloud formations."
Anne Chu

"I’ve come to the realization that a landscape is part of a larger energetic system; that it is not constant in form, structure or proportion; and that any attempts to capture both the rough topography and the sensorial experience of landscape in painting must include an active human presence. The essential reality of nature is not separating, self-contained, and complete in itself. Rather, nature’s unfolding truth emerges only with the active participation of the human mind.

I believe that painting’s particular calling is to initiate this type of engagement. I also believe that the traditions of abstract painting (such as those developed by the three artists I mention above) are particularly suited to the task. Abstraction’s imperative to grant the medium priority over the subject matter allows for an exploration of the expressive capability of line as an embodiment of naturalistic form and of human values."
Paul Bloodgood