This North American premiere of Xenakis's visual work is comprised of samples of his pioneering graphic musings, architectural plans, compelling preparatory mathematical renderings, and pre-compositional sketches - in all, nearly 100 documents created between 1953 and 1984. The exhibition is accompanied by a schedule of public programs, concerts, and symposia around New York City. Curated by Sharon Kanach and Carey Lovelace. 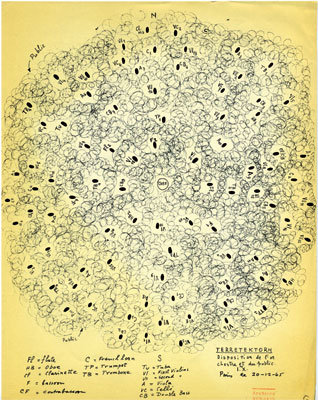 The Drawing Center announces Iannis Xenakis: Composer, Architect, Visionary, on view in the Main Gallery from January 15 – April 8, 2010. The exhibition will explore the fundamental role of drawing in the work of avant-garde composer Iannis Xenakis (1922–2001). One of the most important figures in late twentieth-century music, Xenakis originally trained as an engineer and was also known as an architect, developing iconic designs while working with Le Corbusier in the 1950s. This premiere presentation of Xenakis’s visual work in North America will be comprised of samples of his pioneering graphic notation, architectural plans, compelling preparatory mathematical renderings, and pre-compositional sketches—in all, nearly 100 documents created between 1953 and 1984. Iannis Xenakis: Composer, Architect, Visionary is co- curated by Xenakis scholar Sharon Kanach and critic Carey Lovelace and will travel to the Canadian Centre for Architecture (June 17 – October 17, 2010) and the Museum of Contemporary Art, Los Angeles (November 2010 – February 2011).

The exhibition will be accompanied by an ambitious schedule of public programs, concerts, and symposia around New York in collaboration with Electronic Music Foundation (EMF), 92YTribeca, Brooklyn Experimental Media Center at Polytechnic Institute of New York University, Diapason Gallery, the International Contemporary Ensemble (ICE), the New York University Percussion Ensemble, the Miller Theatre at Columbia University, and The Morgan Library & Museum. Programs will include a virtual-reality recreation of the programming within the Philips Pavilion, taking place at the Judson Church; a month-long sound installation recreating several of his works; a three-day symposium exploring the composer/architect’s ongoing impact in music and design; performances of Xenakis’s compositions; and a film program. The exhibition will coincide with the 2010 launch of The Xenakis Project of the Americas, under the auspices of the Barry S. Brook Center for Music Research and Documentation within the Graduate Center of City University of New York.

One of the world’s most widely performed contemporary composers, Xenakis brought together architecture, sound, and advanced contemporary mathematics, moving away from traditional polyphony to create music comprised of masses of sound, shifting abstract aural gestures, linear permutation, and sonic pointillism. A groundbreaking interdisciplinary approach was also apparent in his architectural creations, such as the Philips Pavilion, an icon of twentieth-century architecture, which Xenakis created under Le Corbusier for the 1958 Brussels World’s Fair. The design of the Philips Pavilion’s volumetric structure was inspired by the glissandi—glides between pitches—that made up Xenakis’s groundbreaking orchestral work Metastaseis (1953–54). The meticulously rendered works on view in the exhibition burst with kinetic energy and palpable sonic qualities, providing a singular insight into this extraordinary innovator’s process of “thinking through the hand.” In addition, listening stations and preloaded iPods and will provide an intimate aural experience to accompany the works on view.

Iannis Xenakis was born in 1922 in Braïla, Romania, and died in 2001 in Paris, France. A Greek Resistance fighter in World War II, he fled to France as a political refugee in 1947. Having obtained an engineering degree from the Athens Polytechnic Institute, he collaborated with Le Corbusier in Paris from 1947–1959. From 1950–1953, while working with the noted architect, he studied composition at the Paris Conservatory under Olivier Messiaen. Xenakis’s collaboration with Le Corbusier as an engineer and architect yielded innovative projects such as the Couvent de La Tourette (1955) and the Philips Pavilion at the Brussels World’s Fair (1958). Xenakis was also a speculative thinker, the author of such books as Formalized Music: Thought and Mathematics in Composition; Music and Architecture; and Arts/Sciences: Alloys. He was the founder (1965) and Director of the Center for Studies of Mathematical and Automated Music (CEMAMu) in Paris; Associate Professor, Electronic Music and founder and Director, Center for Mathematical and Automated Music (CMAM) at Indiana University in Bloomington (1967–72); researcher at the Centre National de la Recherche Scientifique (CNRS) in Paris (1970); Gresham Professor of Music, City University London (1975); and Professor at the University of Paris (1972–89). Iannis Xenakis was awarded the Kyoto Prize in 1997, considered the Nobel Prize of Music, and the Polar Prize in 1999.

Iannis Xenakis: Composer, Architect, Visionary is co-curated by Sharon Kanach and Carey Lovelace. Sharon Kanach, a Paris-based new music specialist who worked closely with Xenakis until the end of his life, has edited and translated several books of his writings. New York-based critic Carey Lovelace is co-president emeritus of the International Association of Art Critics, U.S. Chapter, and a writer for Art in America, Artforum, and other publications. Lovelace, formerly an avant-garde composer, and Kanach both attended Xenakis’s legendary class at the Université de Paris I, which he led from 1972 through 1989.

To accompany the exhibition, The Drawing Center will produce a 200-page, full-color catalog. One of the first major publications on Xenakis to be produced in English, it will include essays by music writer Ivan Hewett, exhibition curators Carey Lovelace and Sharon Kanach, a text by his daughter, Mâkhi Xenakis, and nearly 100 illustrations, including Xenakis’s musical scores, architectural blueprints, drawings, and studies, as well as archival photographs. The publication will be available in January 2010.

January 19, 7:30pm
A Xenakis Triple Gala - concert, book launch, and inauguration of The Xenakis Project of the Americas
Elebash Hall at the Graduate Center of City University of New York, 365 Fifth Avenue

The Drawing Center announces Selections Spring 2010: Sea Marks, on view in the Drawing Room from January 15 – April 5, 2010. The exhibition will be comprised of works by Agnes Barley, Jerome Marshak, and Peter Matthews, three artists selected from the Viewing Program who notate, describe, and interpret aspects of the sea. This exhibition is curated by Nina Katchadourian, Viewing Program Curator.

Responding to the exhibition Iannis Xenakis: Composer, Architect, Visionary, which will be on view simultaneously in The Drawing Center’s Main Gallery, Sea Marks takes a personal facet of Xenakis’s life as its starting point. Beginning in the early 1950s, Xenakis and his family vacationed on the Mediterranean island of Corsica, where they camped and kayaked. His daughter Mâkhi draws a connection between what she calls, “the violence and the special force” of her father’s music and his intense contact with the Mediterranean.

Selections Spring 2010: Sea Marks examines the capacity of drawing to represent something as dynamic, volatile, and vast as the sea. Leonardo’s deluge drawings, Turner’s watercolors, and Vija Celmins’s drawings and paintings are but a few examples of how artists have contended with representing water. Just as Xenakis used drawing to configure and materialize his ideas, the artists in Sea Marks have invented personal and abstract drawing languages to translate the sea. All three artists use distinctly different interpretive strategies that yield a range of unexpected results; in fact, one may not immediately recognize the sea in any of their works. While staying within the material bounds of traditional drawing, the works expand our understanding of how drawing acts as a descriptive system and means of interpretation.

Agnes Barley’s series of collage drawings both build up and break down the architecture of the waveform. Geometric shapes cut from painted paper are combined in abstract constructions, in which one or several elements carry over from one drawing to the next in a perpetual state of transformation. Barley was born in 1970 in Jacksonville, Florida. She received her MFA in 1997 from the Academy of Fine Arts in Vienna, Austria, after studying at the Cooper Union for the Advancement of Science and Art and Parsons School of Design, both in New York. Her work has been exhibited at Jen Bekman Gallery and e-flux in New York City and at venues throughout Vienna. Barley lives and works in New York City.

Since 1981, Jerome Marshak has lived on Lopez Island off the coast of Washington state. His studio sits on the headlands at the edge of Puget Sound, and his delicate, precise drawings derive from landforms in his view. Using customized Plexiglas shapes influenced by the surrounding water, he traces curves that are then supplemented with a network of inked dots that respond rhythmically to the light and lines of the seascape. The works, and the tools that he uses to make them, are reminiscent of navigational charting systems. Marshak was born in St. Louis, Missouri, in 1942 and began making art in 1965 while studying law at Washington University in St. Louis. During the late 1960s and early 1970s, his work was exhibited at the Los Angeles Artist's Association and the Comsky Gallery in Los Angeles.

Peter Matthews interprets the sea by literally immersing himself in it. Spending up to 11 hours in the Pacific Ocean while drawing on a large sheet of paper nailed to a floating board, Matthews notates the changing environment as well as his physical responses to it while “experiencing the observable and observing the experiential.” Matthews received his MFA and his BFA at the Nottingham Trent University, England, 1998-2003. His work has been exhibited at the T.W. Wood Gallery in Montpelier, Vermont; the Santa Cruz Mountains Art Center in California; Barrett Art Center in New York; the Centre for Recent Drawing in London and the Kunstraum Kreuzberg/Bethanien Gallery in Berlin, among others. Peter Matthews was born in 1978 and lives and works in England.

To accompany the exhibition, The Drawing Center will produce number 89 in the Drawing Papers series. The fully-illustrated volume will include an introduction by curator Nina Katchadourian and an essay by D. Graham Burnett, Professor of History and History of Science, Princeton University.