Blood of a Poet 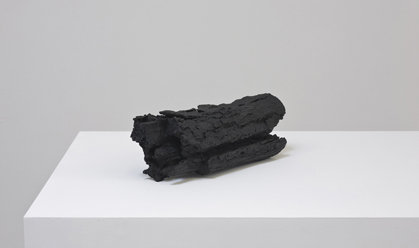 The title of the exhibition resonates Le Sang d’un poete, Jean Cocteau’s first film of 1930. Grouped in reference to Cocteau’s piece about artistic struggles some 80 years later, these seven artists from Europe and the United States, approach art-making with a fresh take on conceptual-art and minimalism.

It is the mirror in Le Sang d’un poete that offers one of these memorable exits from reality. With a splash, the protagonist in Cocteau’s film plunges through the surface of a mirror to his subconscious. On the surface of his acid-etched mirrors, Ned Vena conjures this moment with a similar splash. He either marks a passage beyond reflection—representation—or makes a caustic dash against it, denying the space the work hangs in.

On the other hand, Harold Ancart embraces environments as architectural ready-mades. He draws through space with vectors of seemingly invisible fishing line. Revealed through carefully painted segments of polymer and black pigment, these suspended frameworks bring form to thought in mid-air.

Language and interpretation are at the root of Benoît Maire’s practice. His piece DSC00368, 2009 from the series Aesthetics of Differends composes a series of remarks on metaphysics with an image of a nude walking through an exhibition of his work. Maire’s reflections upon being in the moment of art reveal a simultaneous romanticism and banality.

Adam Pendleton’s work explores the impact of technology on the experience of language—how information is dispersed and broken down for consumption. His deconstruction of language in the series titled System of Display brings this reality to the surface of images. He dismantles language as Sol LeWitt deconstructed the cube—Pendleton’s piece featuring stacks of ceramic cubes are a direct link to that minimalist inquiry.

David Lieske and Sabine Reitmaier’s photograph of a disheveled efficiency-type room raises similar questions on the subject of the art experience. The room is "fictional," fabricated and installed in a gallery space in Berlin to be shot as the cover for TEXTE ZUR KUNST's "Psychoanalysis" issue. Though the image originated in Berlin for TEXTE ZUR KUNST, the physical piece on display is a tear-out from the French publication Fairy Tale magazine. By presenting their image which was published twice before in different contexts, they suggest the ease at which an image may move and transform between media and location while questioning the idea of ownership of art and the artist's inability to own the meaning of their work.

Where Lieske and Reitmaier’s work is marked by an elusive lightness, there is a strong sense of gravity to Olivier Babin’s work. He references and reduces the philosopher Diogenes to a rock-and-flashlight assemblage in a kind of ironic take on Rodin’s The Thinker. Diogenes, similar to Babin’s collaborative wall-piece made with Harold Ancart, is a humble yet heavy mixture of material weight and light.

Olivier Babin (b. 1975; lives and works in New York and Paris) has exhibited in group shows at Palais de Tokyo and the Centre Georges Pompidou in Paris, France; The Musée d'Art contemporain in Lyon, France; and Artists Space in New York. He has had solo exhibitions at Honor Fraser Gallery in Los Angeles, CA; Seomi & Tuus Gallery, Seoul, Korea; and Galerie Frank Elbaz in Paris, France.

Adam Pendleton (b. 1980; lives and works in New York) has exhibited at the Studio Museum in Harlem, New York; the New Museum, New York; the High Museum of Art, Atlanta, GA; the Museum of Contemporary Art, Chicago; and the Whitney Museum of American Art, New York.