This double exhibition project, which is taking place as part of the programme Berlin-Paris 2010, is curated jointly by the two galleries Gregor Podnar and schleicher+lange. It bring artists together around the notion of space-time, from its most concrete, physical aspects to its most abstract interpretations - in science, fiction, geology, symbolism. In Berlin are presented works by Attila Csorgo, Franziska Furter, Laurent Montaron, Goran Petercol and Evariste Richer; in Paris also Vadim Fiskin and Alexander Gutke. 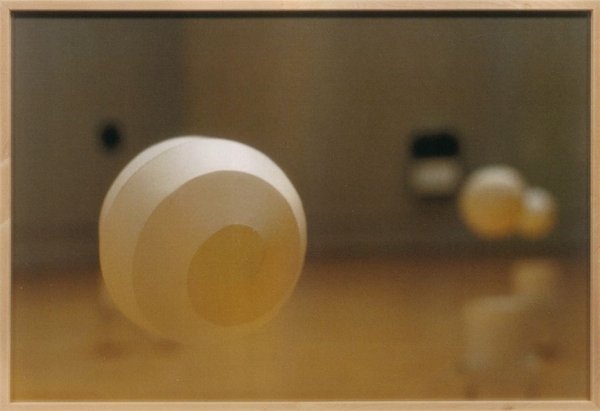 The Gregor Podnar and schleicher+lange galleries are pleased to announce Ellipse/Eclipse. This double exhibition project, which is taking place as part of the gallery exchange programme Berlin–Paris 2010, will be on display through March 13 in Berlin and March 20 in Paris.
The two exhibitions, curated jointly by the two galleries, take their name from a work by Evariste Richer. In the project, each gallery is hosting artists from the other while at the same time showing artists from its own programme. In Berlin, the Galerija Gregor Podnar is presenting works by Attila Csörgő, Franziska Furter, Laurent Montaron, Goran Petercol and Evariste Richer. In Paris, galerie schleicher+lange presents Attila Csörgő, Vadim Fiškin, Alexander Gutke, Goran Petercol and Evariste Richer.

The Ellipse/Eclipse exhibitions bring artists together around the notion of space-time, from its most concrete, physical aspects to its most abstract interpretations – in science, fiction, geology, symbolism. Evariste Richer’s work Ellipse/Eclipse represents the sun and the moon through the use of two light reflectors, such as are often found in movie theatres. Their respective gold- and silver-fabric faces reflect and intensify light, making them resemble heavenly bodies. This work acts as a link between the exhibited artists: the way they make use of devices suggests a certain pragmatism in the employed medium, which nevertheless stimulates the imagination and object-related thought.

As shown in Berlin, Richer’s Ellipse/ Eclipse will be set in dialogue with the work After by Laurent Montaron. Here the slide projection of an image of an explorer on a film set covered in artificial snow during a shoot is regularly interrupted by a spinning propeller in the front of the projector. The blinking image suggests the related experience of an actual film screening even as it lays bare and comments on the presented staging in the exhibition space. The adventure implied in the image of the explorer in fact belongs to the visitor, who is invited to "travel" between two realities.
The works of Attila Csörgő explore photographic space, its two-dimensionality and its potential as a geometric entity. Orange Space, for instance, attests to a double relationship to space through a panoramic photograph that is presented both as a flattened "orange peel" in a frame and as a sphere created from this approximate spiral.
Franziska Furter presents drawings from the series Draft, which can be understood as enlargements on the graphic representations of the most ecstatic and epiphanic moments from both Manga aesthetics and more traditional iconographies. Nevertheless, on closer inspection of the overlapping lines and black shapes of the graphite, the viewer is able to get a sense of the mental concentration that has occurred in the artist’s meticulous and repetitive gesture within this now-definable space.
Goran Petercol investigates how an object acquires the character of an artwork through its presentation; thus, he analyses and defines the space and interspaces from which his works emerge. In the series After Reflections, a ceramic mass of 5 cm is added to the original dimensions of an object as materialized interspace. This establishes a reconnection between the original object and a creative process based on the chance occurrence of a broken form.

In Paris, the work CMYK, by Evariste Richer, is concerned with the durability of material. It consists of four semiprecious stones in the colours cyan, magenta, yellow and black. The reference to the colour code of offset printing is thwarted by the temporal nature of the stones, as well as by the unique character of the material.
The work Ping-Pong Electronic, by Vadim Fiškin, also plays with the relationship between the material and time. As in a homemade scientific experiment, a ball moves forwards and backwards, endlessly pushed by air from blow dryers, as a way to illustrate the laws of gravity and force. Its reference to the Sisyphus myth turns it into an allegory of the absurdity of the cycle of life.
Spherical Vortex, by Attila Csörgő, can be seen as echoing the other works. Like a planet, a lamp spins on its own axis so fast that the point of its light turns into bands and its trajectory describes a sphere. Three photographs make visible what the naked eye is unable to apprehend.
Also on display is a work from the series Sjene, by Goran Petercol. A metal tube placed between a light bulb and a pedestal functions as a channel for light. The work has the effect of amplifying the phenomenon by which a flowing, evanescent material is maintained. Petercol’s works often stimulate us to perceive the world more intensively.
The leap from the "world" to the universe is only a wordplay away in Alexander Gutke’s work Universe. Gutke’s art is often characterized by the way it disrupts our usual relationship to emptiness, space and our own imagination, and this by means of obsolete projection devices that investigate themselves. The work Universe remains true to form, conveying the impression that the projected word "carousel" (which can refer also to the tray on a slide projector) is in fact travelling through the space it defines. In an almost tautological and, indeed, literal way, this work re-creates a total space through the unique medium of totality.

The exhibitions take place in the framework of "Berlin-Paris, un echange de galerie".