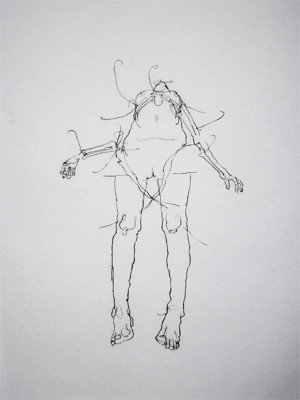 Rotwand is delighted to present the first solo exhibition in Zurich of American artist Chloe Piene (*1972 in Stamford, Connecticut).
The primacy of experience, and of the body as the site of that experience, has long been core to Chloe Piene’s practice. Her drawings have consistently engaged in an erotic game that treats the body as a fluid and endlessly complex Faberge egg; unveiling it’s intricacies layer by layer, unraveling it’s contiguities until it exists as an object in a state of impossible phase transition, simultaneously solid, gas, liquid; bone, blood and breath; lymph, methane, hair and tooth; all solids melting, all emptinesses potential sites of manifestation.

Piene’s new sculptures play against her drawings in surprising ways, opening a dialogue through which each dismantle and examine the other with the same morbid aesthete’s eye that peels back the layers of tissue in her figures. What is solid here is undeniably so. But often, the eruptions of gross matter seem to describe a space rather than an object – the volume occupied by exhaled air, say, or the aura of heat that ebbs from a living limb. For Piene, drawing and sculpture come from the same “fixed and ambiguous” place, where polarities are neutralized and complicated (or more accurately, where complicated and indeterminate material has yet to be subject to distinction). Eruption and irruption are consubstantial, every rupture a penetration. Matter rushes in to dominate (or become?) space, much as space infiltrates and opens up the body in the drawings: volumes presented are shifting, solid, closed, vaporous, and abyssal. This sliding between states has a clear parallel in the definition of ectoplasm as a substance that has no substance, that exists in a state so out of phase with what we know that it has no empirically graspable qualities.

The plasteline (an inert material normally used in the initial stages of casting) used by Piene as the prima materia of her sculptures has an in-between aspect of its own. She says it “has the quality of something organic, like chocolate or fat”; its surface echoes that of wet clay, as if it were still malleable, still fleshy. The retention of this sense of material fluidity allows static form to speak about flux: the fixed/morphing point of now (like the eye of a storm) becomes a reference to the course of time that moves away from that point in all directions. The transference of energy which occurs in drawing and sculpting is also important; the surfaces of paper, clay, and plasteline working as sites of resistance and exchange. They are significant less as records than as vessels. The figure of the Golem is a useful reference here – a body made from dust and clay, inscribed with the Hebrew word for “Truth”, brought painstakingly to life by the Rabbi’s ritual investment, his complete physical and spiritual engagement in the act of making; a body that lives and acts because of something instilled by the will and labor of an outside agent; a body that trembles on the lip of a non-existence to which it can always, at any second, be returned.

Chloe Piene was born in 1972 and spent her early years in New York State. She received a degree in Art History at Columbia University and studied Fine Art at Goldsmiths College in London. She began drawing when she was very young and has since championed it as a major medium. Known for the scope and power of her line, Piene has been called both brutal and delicate; figurative, forensic, erotic and fantastic. Most recently her sculptures made of wax and plasteline were exhibited in Paris and Basel. Her drawings, sculptures and video installations have shown nationally and internationally in solo exhibitions at institutions such as the Carré d’Art Musée d’Art Contemporain, Nîmes, and the Kunsthalle Bern. She was part of the 2004 Biennial at the Whitney Museum of American Art and recently exhibited in two person shows each with Hans Bellmer and Willem Dekooning. Her work is included in public and private collections such as the Museum of Modern Art and the Whitney Museum of American Art, New York, the Walker Art Center, Minneapolis, the Centre national d'art et de culture George Pompidou, Paris and the Sammlungen Hoffman and Burger in Berlin. She lives and works in New York City.
Lee Triming