An exhibition of works by one of the most important artists to have emerged from Latin America. The works on show, Der Fliegende Hollander (The Flying Dutchman) and The Warhol Series, reflect Kuitca's intense relationship to his primary medium, painting. The 63 works on paper that make up The Warhol Series began as a homage to Warhol. 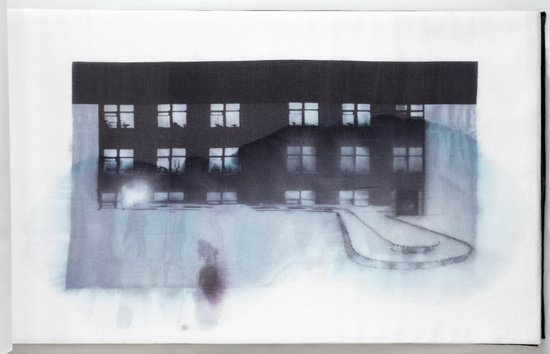 Hauser & Wirth is pleased to announce an exhibition of works by Guillermo Kuitca, one of the most important artists to have emerged from Latin America. The works on show, Der Fliegende Holländer (The Flying Dutchman) and The Warhol Series, reflect Kuitca’s intense relationship to his primary medium, painting.

Der Fliegende Holländer (Scrim Suite) is an installation that traces its origins to the stage designs conceived by Kuitca for a 2003 production of Wagner’s Der Fliegende Holländer at the Teatro Colón in Buenos Aires. Currently on show as part of a retrospective at the Miami Art Museum until January 2010, this installation explores the experience and perception of light, space and image through the medium of three silk scrims.

The exhibition at Hauser & Wirth Zürich will also include Kuitca’s book edition of Der Fliegende Holländer with drawings based on the designs for the Wagner production in Buenos Aires. Single pages, dye prints on silk organza from an un- bound book, will be displayed offering the viewer the unique opportunity to see the publication exhibited in its entirety. The sixty-three works on paper that make up The Warhol Series began as a homage to Warhol. These works are mostly based on images reproduced in Kynaston McShine’s monumental catalogue published on the occasion of Warhol’s 1989 retrospective at the Museum of Modern Art, New York. Focusing on selected pieces, over a period of several months, Kuitca created 63 re-worked versions.

When installed as a grid on the wall, the work as a whole echoes a dream-like constellation - Warhol’s signature icons are rendered almost unrecognisable by eliminating their subject or, as Kuitca has called it, by ‘swallowing the figure’. In place of representation is abstraction, hints of the figures are occasionally evident, but as a whole what remains is a modulated work of potent yet diffused colour bearing the signature of Kuitca’s meditative and repetitious practice, working with ink and watercolour.

Guillermo Kuitca’s practice explores themes of the disloca- tion and the intersection of public and private spaces through works ranging from paintings of theatrical scenes, to complex abstractions referencing maps and architectural plans. Kuitca represented Argentina at the Venice Biennale in 2007, where he was one of only three artists to exhibit in both a national pavilion and in the Italian Pavilion.

Born in Buenos Aires in 1961, Kuitca has exhibited worldwide and his work is held in several major international collec- tions, including the Metropolitan Museum of Art, New York; MoMA, New York; The Art Institute of Chicago; Tate, London; Stedelijk Museum, Amsterdam; and the Hirshhorn Museum and Sculpture Garden, Washington.