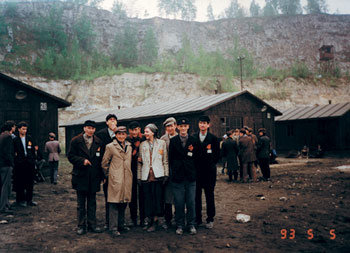 "The New School has long served as a haven for politically engaged artists," said Radhika Subramaniam, director of the Sheila C. Johnson Design Center, Parsons’ award-winning downtown exhibition and public programming center dedicated to generating an active dialogue on the role of art and design in the contemporary world. "The Storyteller connects with this tradition by bringing together powerful artists who, through their work, document the rapid, violent transformations of our time, and force us to consider the implications of these important events on our world."

"The curators of Storyteller initiated the project as a way to unite a group of influential contemporary artists who challenge our notions of objective truth," said Kate Fowle, executive director of iCI. "The exhibition enables visitors to experience important past and current world events from people's personal experiences and perspectives. With its rich history of fostering socially active art, The New School was a natural fit for the exhibition’s New York run."

The works in The Storyteller engage a range of narrative strategies. In some cases, the story is a drama based on real events, as in Deller and Figgis’ The Battle of Orgreave, a reenactment of the violent clashes between police and local plant workers in 1984 England, as well as the works of Gander and the collective called Missing Books. In other cases, the stories function less as reconstructions of the past than investigations into the relationship between past and present, as in the Roberts’ What’s the Time in Vyborg and Fast's Spielberg's List, a video exploring the experience of extras in Stephen Spielberg's film Schindler's List. A third group, which includes Fei, Koester, Paci, and Fatmi, invokes the literary genres of fairy tales, photo essays, and folklore. Finally, other projects such as those by Joreige, Mumford, and Rakowitz involve active participants in contemporary political situations.

Multimedia works by Deller, Figgis, Fast, and Roberts will be presented in special screenings throughout the course of the exhibition. Parsons and iCI also will present a series of related programs during the exhibition run, including a colloquium on January 30 at 2:00 p.m. that will feature Mumford in conversation with Sundell and Gilman, moderated by iCI Executive Director Kate Fowle. In addition, many New School courses will use the exhibition as a learning laboratory, hosting class meetings, discussions, and design charettes. For more information, please visit www.newschool.edu/johnsondesigncenter.

The Storyteller is a traveling exhibition organized and circulated by iCI (Independent Curators International), New York. The exhibition, tour, and catalogue are made possible, in part, with support from The Andy Warhol Foundation for the Visual Arts; the Horace W. Goldsmith Foundation; iCI Benefactors Agnes Gund, Gerrit and Sydie Lansing, and Barbara and John Robinson; the iCI Partners and iCI Advocates.

About the Curators
Claire Gilman (Ph.D., Columbia University) is an independent curator and writer living in New York. From 2003-2006, she was Janice H. Levin Curatorial Assistant at the Museum of Modern Art where she worked on Edvard Munch: The Modern Life of the Soul (2006) and Greater New York 2005. Before that, she curated Arte Povera: Selections from the Sonnabend Collection (2001) at Columbia University’s Wallach Art Gallery. Gilman teaches at The Center for Curatorial Studies, Bard College, and is writing a book on post-war Italian art.

Margaret Sundell (Ph.D., Columbia University) is a former art editor at Time Out New York, and her writing has appeared in Artforum, Art Journal, and Documents. Sundell has taught art history and critical theory at Columbia University, the Whitney Museum of American Art, and Parsons The New School for Design. She is currently director of the Creative Capital | Warhol Foundation Arts Writers Grant Program.

About the Sheila C. Johnson Design Center
The Sheila C. Johnson Design Center is an award-winning campus center for Parsons The New School for Design that combines learning and public spaces with exhibition galleries to provide an important new downtown destination for art and design programming. The mission of the Center is to generate an active dialogue on the role of innovative art and design in responding to the contemporary world. Its programming encourages an interdisciplinary examination of possibility and process, linking the university to local and global debates. The center is named in honor of its primary benefactor, New School Trustee and Parsons Board Chair Sheila C. Johnson. The design by Lyn Rice Architects is the recipient of numerous awards, including an Honor Award from the American Institute of Architects.

About Parsons The New School for Design
Parsons The New School for Design is one of the most prestigious and comprehensive institutions of art and design in the world. Located in New York City, Parsons prepares students to creatively and critically address the complex conditions of contemporary global society. Combining rigorous craft with cutting-edge theory and research methods, Parsons encourages collaborative and individual approaches that cut across a wide array of disciplines. For more information, please visit www.parsons.newschool.edu.

About iCI
iCI (Independent Curators International) produces exhibitions, events, publications, and training opportunities for diverse audiences around the world. A catalyst for independent thinking, iCI connects emerging and established curators, artists, and institutions, to forge international networks and generate new forms of collaboration. Working across disciplines and historical precedents, the organization is a hub that provides access to the people, ideas, and practices that are key to current developments in the field, inspiring fresh ways of seeing and contextualizing contemporary art. For more information, please visit http://www.ici-exhibitions.org.