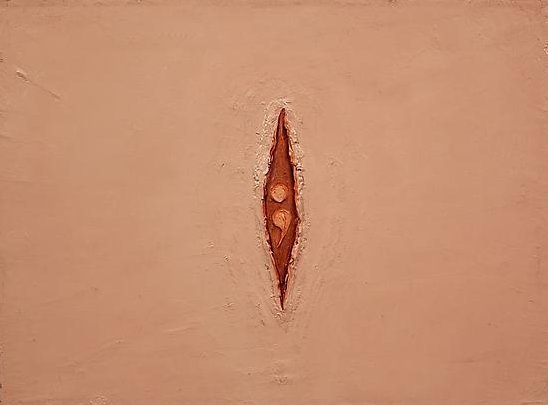 As the title of the exhibition suggests, the show is designed to make visible a portion of the female anatomy that is generally considered taboo―too private and intimate for public display. If shown at all, this part of a woman's body is usually presented in an abject fashion, generally within the context of pornography, intended, in almost all cases, for the exclusive pleasure of men. The goal of this exhibition is to remove these prurient connotations, implicit even in works of art, ever since the pudendum was prudishly covered by a fig leaf. This gesture of false modesty, it should be noted, was devised and enforced entirely by men (not only in the case of classical sculpture, but also in the Bible, in which, immediately after their disobedience in the Garden of Eden, Adam and Eve cover their genitalia with fig leaves). Indeed, until recently, men made virtually all depictions of the frontal nude female figure, but as this exhibition will demonstrate, that has changed dramatically in recent years.

The catalogue for THE VISIBLE VAGINA will trace this motif in art history from prehistoric to modern times. It includes an introduction by the exhibition organizers, as well as a highly informative and provocative essay by Anna C. Chave, Professor of Contemporary Art and Theory at the Graduate Center of the City University of New York. Inspiration for both the show and its catalogue came from Eve Ensler's The Vagina Monologues, a stage play that premiered off-Broadway in 1996, and was followed by various productions throughout the world (it appeared as a book in 1998). Ensler gave voice to countless women worldwide, honoring the complexity and mystery of their sexuality, basically encouraging them to consider their vaginas as powerful and expressive components of their physical selves, something not to be ashamed of, but to be proudly protected as an assertive and positive manifestation of their being. The idea for this show came from realizing that there was no better group to give vision to this goal than artists, many of whom had already incorporated imagery of the vagina in their works. Because of Ensler's pioneering work in this field, the catalogue is dedicated to her, and proceeds from its sale shall be donated to V-Day, the organization she founded to end violence against women and girls throughout the world. Price: $27.50.

EVENT
Panel discussion with artists in the exhibition, moderated by Anna Chave, will take place on Saturday, January 30, from 2-4 pm at David Nolan Gallery. We hope you will be able to join us.