11am-6pm Thur-Sat and by appointment on Sunday

Film Notes. The artist's subjective response to the film makers she has chosen reveals her admiration for specific camera shots - for example the back view of the heads of Vincent and Jules filling the screen in Pulp Fiction, or the dramatic isolation of two Mennonite houses in Carlos Reygadas' Silent Light. 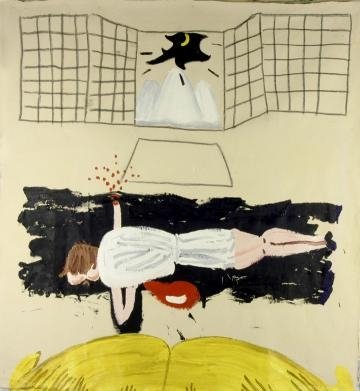 Applying a defiantly unsophisticated aesthetic, Wylie’s large two-canvas paintings begin as drawings of frames recollected from films. Essentially they are remembered images, their ‘accuracy’ is a matter of truth to their impact on a once-viewing. Wylie’s subjective response to the film makers she has chosen reveals her admiration for specific camera shots – for example the back view of the heads of Vincent and Jules filling the screen in Pulp Fiction, or the dramatic isolation of two Mennonite houses in Carlos Reygadas’ Silent Light.

The biggest single collaged canvas of Penelope Cruz is less a portrait than a visual list of her wolf whistle feminine attributes.

A modest proposal: painting in the West took a nosedive near the start of the fifteenth century, landed in the swamp of illusion, and didn’t pick up again for four hundred years, until the days of Cézanne and Rousseau. (If we were standing in Venice’s Accademia right now, I wouldn’t have to say this; you’d just look around and agree with me.) What mostly disappears during that half-millennium or so, while artists try to make rhetorical windows and turn oil transparent – and what only comes back in brief bursts – is a conception of painting as a compressed, unruly, dreamy/nightmarish, variably naïve space in which the reduction and exaggeration of pictorial information can be a shining virtue. A space where everything is already subject to distortion allows for the collapsing and impacting of registers and references: for the convening of the scabrous and comedic, the traumatic and defiant, the trivial and profound.

Which brings us to Rose Wylie, for whom it’s a horizontal, post-hierarchical aesthetic world: in her paintings, the look and feel of ancient art, South Park, sports or news photojournalism, Mexican commercial graphics and African lorry art, thrift-store canvases and the films of Carlos Reygadas, Pedro Almodóvar, and Quentin Tarantino jostle on the same plane. Her art makes one think that consuming all this stuff must give her the improbable energy her paintings exude. It isn’t diaristic so much as it is a recording of lasting imprints, of encountered intensities good and bad: whether they be news stories about toxic paint on toys or a nation’s obesity problems, or, in the Film Note series, a kind of visual sedimentation in which she paints cinematic scenes from memory. Like Bill Pullman in Lost Highway, she likes to remember things her own way, whatever the thing and whatever the way.

How she remembers encodes an attitude. Wylie’s paintings are controlled blurts, humming with a sardonic and irritable energy: here, in quivering agglutinations of paint, are women acting like little girls, here are prancing footballers; here are birds and cannons. This doesn’t reduce to anything so simplistic as an embodied argument. It’s more of a collective imposition, a horror and a thrill: the world Wylie limns is at once terrifying, ridiculous and fringed with succours. She paints it with surging vigour, applying a defiantly unsophisticated aesthetic to situations
and spheres either treated very seriously or overlooked, in what might be a kind of temporary mastery or accommodation to the experience of the everyday’s splenetic extremity, its tangle of pressures and its perpetual visual overspill. What to do with all that optical and emotional info? Save the best, save the worst, and express both in a way which reminds us that painting is, deep down, the most marvellously undomesticated of arts.
Martin Herber