Broken Down Walls of the Crimson Salon 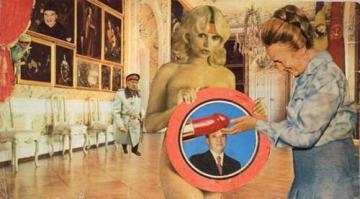 At the very moment when, in his dreams, a horrific scream breaks down the walls of the crimson salon, Jean Baptiste Grenouille wakes up on a mountain to discover that he has no personal scent. That is a very short summary of the fragment from the novel Perfume, in which Patrick Süskind contemplates the moment an individual becomes aware of the essence of their being. While the exhibition Broken Down Walls of the Crimson Salon cannot delve that deeply, since it does not address this issue, it attempts to tell a story about what is lacking in the system and in contemporary art. Owing to the confusing and unchecked volume of work churned out by the production centres of contemporary visual art, we are often forced merely to consume information without reflecting on it, which would be required if we were to fully appreciate a work of art. Consequently, a work of art will usually end up as a visual imprint, dead figures printed on a page of an accompanying catalogue, or a floating illustration of a broader concept. The circle of hyper-production, however, is even more vicious than it may seem at first glance, as production centres, in order to satisfy the necessary criteria, are continuously struggling with various aspects within the art system, such as financing policies, red tape, personal preferences, programme revisions, various interests, and even cold pragmatism. The solution finally seems like a distant utopian structure. But not all is grim. Mere awareness of these traps is invaluable, as it enables one to choose between the lesser of many ‘evils’. And even more important is the awareness that less is actually much more.

The idea for the exhibition Broken Down Walls of the Crimson Salon was born in 2008, when we were preparing an exhibition Jerman, which represents a kind of a starting point for the exploration of artistic practices that are inextricably linked with the artist’s life. Or, put differently, an exploration of the artistic practices of artists who, in one way or another, used some aspects of their private lives, or even their entire lives, to create their art. The line that divides the spheres of life and art is thus almost completely blurred, which renders the art direct, astonishingly honest and completely straightforward. The intention behind presenting works of art is not to lay out the plethora of formal processes used by individual artists, but rather to highlight decisions which the artists took during the course of their lives and communicated through an artistic medium. As with any work of art, judgement rests with the spectator. But for each of the artists, every decision reflected a choice about how they wanted to lead their lives. A common characteristic of all the works featured in the exhibition is intimacy, which is directly introduced by the artist into the gallery space, and reveals itself before the eyes of the observer. Intimacy as a building block of life; and, consequently, the works take a variety of forms in this exhibition. Some artists directly comment on geo-political relations and current social issues in their community. As a result of the artist’s own involvement, every comment, which always stems from the heart of a problem, becomes an intimate statement through which the artists define themselves and differentiate themselves from the crowd, with its tendency to herd together. Something different, yet none the less important, is the public and explicit expression of sexual identity within society, which has always been a kind of taboo, particularly if the manifestation is ‘different’, such that it did not fit certain patterns or socially accepted canons, or, in other words, if it refused to conform to the principles of a false social morality that draws on the mythology of a ‘correct’ sexual identity. Throughout the history of art there have been cases when artistic practice assumed a therapeutic function, helping the artist to overcome the most difficult personal crises, such as illness, unbearable living conditions, or unimaginable pain. Art in this context can assume a variety of roles – continuous rational processes or completely intuitive acts – but both reflect a powerful creative drive that helps overcome physical or mental pain. The majority of people walk around in invisible shackles in the form of relationships, responsibilities and systems. Because of this, we constantly aspire to freedom and to break free from the shackles, while within the context of art this can be found in that brief moment of aesthetic, intellectual and sensual catharsis which inevitably reflects the state of an individual; even if this state is one of fear or death, the grimmest and frequent companions of our lives and thus art. However, some exhibited pieces do not express only separate segments of the artist’s lives, but are straightforward renditions of their lives as a whole. The dividing line between the two notions has thus completely disappeared, which means that we may as well equate them, as in art = life. These are radical, yet completely honest decisions that were made by the artists, and do not tolerate any compromise – an unmistakeably direct address to the viewer, who enters the intimate spaces of the artists through a wide open door.

The exhibition Broken Down Walls of the Crimson Salon somehow treats the problems of the perception, comprehension and acceptance of contemporary art. There is no denying that exhibitions of contemporary art are often hermetic and cold presentations of selected works, which is precisely why they are met with stark disapproval, or even ignored completely. There are even more cases when negative reactions are a result of the lack of interest of the salon, small-town, conservative mentality of individuals who spread the blind faith of ignorance. But the problem probably lies elsewhere – in the fact that contemporary art often excludes principles and norms of social aesthetics, and gives rise to completely different processes which are not thought to be inherent in art. However, one should not hold this small-mindedness against such people, as these are subconscious patterns which originate in the cemented traditions of places that, some more than others, reject everything that is new – contemporary. These, along with many others, are the gaping wounds of contemporary visual art. But the most difficult problem quite frequently lies with the viewer who has surrendered under the barrage of daily news and thus exists in ‘off’ mode, unable to take part in a dialogue either with themselves or with an art work. Thus the present exhibition makes no attempt to differ from any other exhibition of contemporary art in terms of its concept or presentation. It is merely honest about the fact that the exhibited works (like those that have gone before and those yet to come) are a kind of a reminder for the viewer, as each one implies a state with which any individual can identify – a state of freedom, pain, intellectual processes, devotion, love, death, illness, declaration, passion, intimacy, etc. – all of which form a retrograde platform for identifying and experiencing a single or several works of art.

The programme of Škuc Gallery is supported by Ministry of Culture of the Republic of Slovenia and Cultural Department of the City of Ljubljana.