Extending from Animated Scene, his critically acclaimed presentation at the 53rd Venice Biennale, the artist exhibits two new works, Sow Farm (near Libby, Oklahoma) 2009, which depicts a sprawling, unmanned, computer-controlled agricultural complex on the American Great Plains, and Lufkin (near Hugo, Colorado) 2009, a portrait of an oil derrick in the same region. 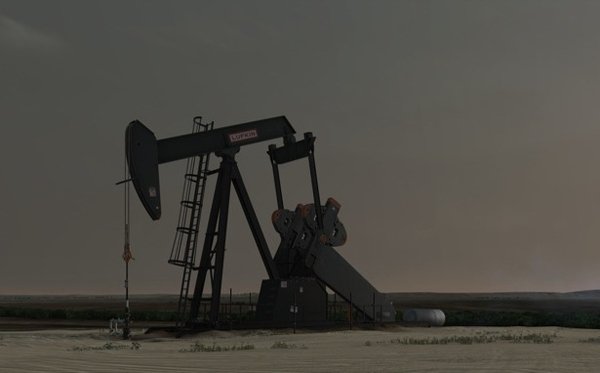 Extending from Animated Scene, his critically acclaimed presentation at the 53rd Venice Biennale, the artist will exhibit two new works, Sow Farm (near Libby, Oklahoma) 2009, which depicts a sprawling, unmanned, computer-controlled agricultural complex on the American Great Plains, and Lufkin (near Hugo, Colorado) 2009, a portrait of an oil derrick in the same region. The works, painstakingly constructed by the artist and his studio over periods of up to eighteen months, employ the new temporal medium of realtime 3D. Since his discovery of it in the late 1990s, the artist has pursued a unique engagement with this form, creating eerily compelling virtual portraits, which extend and develop traditions of painting, photography, cinema and sculpture.

Principally used in video-gaming, realtime 3D is particularly well-suited to depict the desolate agri-industrial landscapes that make up the exhibition, as they themselves are constructed upon a wholly synthetic set of power and energy relationships. From the vantage point of an orbital camera, the viewer is invited to follow the two projected scenes through the slow passage of a three hundred and sixty degree circumnavigation, within a representation of the twenty-four hour day, set in a three hundred and sixty-five day year. Three contemporaneous orbits fold into one, the frozen instant of a photograph extented into a continuum.

John Gerrard was born in Dublin in 1974 and lives and works in Dublin and Vienna. He recently completed a guest residency at the Rijksakademie van beeldende kunsten, Amsterdam. A solo presentation of his work is currently on show at the Hirshhorn Museum and Sculpture Garden, Washington D.C. In late March 2010, Oil Stick Work, a major long-term public projection, will be unveiled at Canary Wharf underground station as part of Transport for London’s 'Art on the Underground' programme.

Gerrard received a BFA from The Ruskin School of Drawing and Fine Art, Oxford University, and completed postgraduate studies at The School of The Art Institute of Chicago and Trinity College, Dublin. Recent solo presentations of Gerrard’s work include John Gerrard: Animated Scene, a collateral project at the 53rd Venice Biennale (2009), Oil Stick Work at Simon Preston Gallery, New York (2009) and Dark Portraits at Royal Hibernian Academy, Dublin (2006). Recent group exhibitions include John Gerrard / Glenn Ligon at the Calgary College of Art and Design (2009); Infinitum at Palazzo Fortuny, Venice (2009); Equal, That Is, To the Real Itself at Marian Goodman Gallery, New York, (2007); and Existencias at the Museo de Arte Contemporáneo de Castilla y León (2007).