Drawings, Paintings, Sculptures and Prints. Within a few short years, the Basel painter, draftsman, printmaker and sculptor became one of the main exponents of Expressionism in Switzerland. His extensive oeuvre, devoted primarily to landscapes and the human figure, emerged within the context of the contemporary avant-garde, his friendship with Ernst Ludwig Kirchner playing a decisive role in this regard. 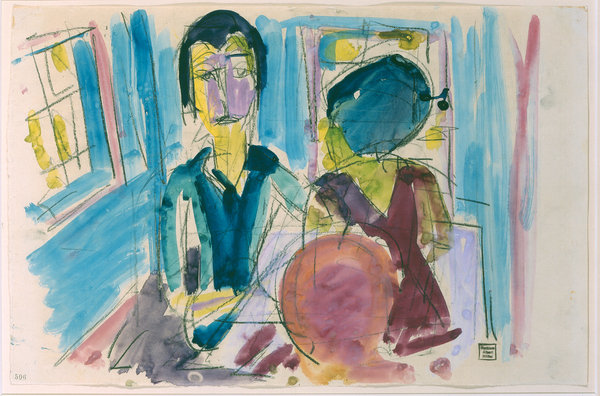 The Basel painter, draftsman, printmaker and sculptor Albert Müller (1897–1926) is considered one of the main exponents of Swiss Expressionism. Müller received his initial artistic training in his native city, at a glass-painting studio and at the Allgemeine Gewerbeschule, the local vocational arts school. Galvanised by the example of Cuno Amiet, he was soon using luminous colours that diverged strongly from the dark tones typical of the established painters of the area. His work first began attracting the notice of a wider audience in 1919.

Although Müller moved to Ticino two years later, he retained close ties to Basel’s cultural life. His active engagement with the avant-garde set off a period of intense artistic development: he took much of his inspiration from Louis Moilliet and Edvard Munch until his encounter with the work of Ernst Ludwig Kirchner in 1923 and subsequent friendship with the artist provided the starting point for his own pictorial language.

Now Müller produced a rapid succession of landscapes and variations on the theme of the human figure, frequently using his own family as models. There were numerous energetically drawn sketches, strong-hued watercolours and paintings marked by sharply juxtaposed areas of colour. His wood sculptures, coarsely carved for greater expressiveness, were in most cases painted, too. A major role in his oeuvre was reserved for graphic work, be it in the form of powerfully contrast-rich woodcuts or of etchings enabling the artist to exploit the entire spectrum of greys with the help of aquatinta and brush etching.

In 1924, on New Year’s Eve, Albert Müller, Hermann Scherer and Paul Camenisch founded the “Rot-Blau” (Red-Blue) artists’ association in the hope of improving conditions for exhibitions and public commissions in Basel. Although Müller belonged to the group only briefly, he made a decisive contribution to the breakthrough of modern art in the city of his birth.

The Kupferstichkabinett acquired a considerable number of drawings and prints from Müller’s estate in 1929, only a few years after the artist’s early death – holdings that have meanwhile expanded considerably thanks to purchases and donations. Supplemented by paintings and sculptures belonging to the Kunstmuseum, the exhibition offers a representative survey of Müller’s work.