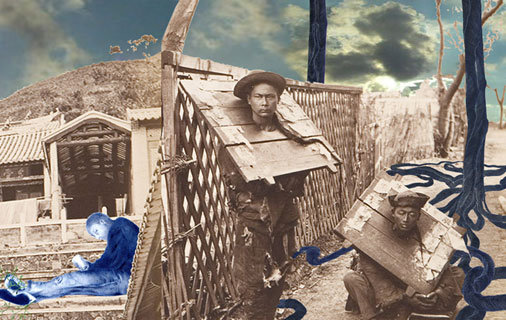 Galleries 1 and 2
Art in the Auditorium II

For this new edition of Art in the Auditorium (subsequent to its presentation on March of 2009), Fundación PROA is collaborating once again with international institutions towards forming a panorama on contemporary video art creation. The participating establishments are: Whitechapel Gallery (London), The Institute for the Readjustment of Clocks hosted by The Istanbul Modern (Istanbul), Ballroom Marfa (Texas), Galleria d’Arte Moderna e Contemporanea (Bérgamo), City Gallery (Wellington, New Zealand), Henie Onstad Kunstsenter (Oslo, Norway) and Fundación Proa (Buenos Aires).

The proposal explores the different presentation formats of video art, one of the most prolific and displayed mediums on the major international exhibitions. For its non-material nature, and for the different methods of exhibition it allows (projection, television, computer, screens), video art adapts to different spaces and situations, changing the traditional forms of relating with an artwork.

Each work demonstrates the formal and conceptual variety of the electronic medium. Some of them investigate the narrative possibilities of the audiovisual presented by the author, other works depict images that carry a strong symbolic meaning, others are based on cultural and historical investigations that resemble a documentary film but from a singular perspective. In other cases, there are visual explorations that through animation techniques and digital manipulation highlight the aesthetic value of the image. Thus, the account of the observant (Di Massimo, Laumann) co-existing with the philosophical considerations (Mayer, Ruilova) or with the dark landscape which displays the ecological metaphor (Nijensohn) become a counterpoint with the exaltation of color and plasticity (Paul, Eviner).

For her first presentation in Argentina, Italian artist Luisa Rabbia presents two works in Fundación PROA, gallery 3. Curates in collaboration with Beatrice Merz, the exhibition evolves around two central works, consisting of a video and a wall installation,

With traveling as the main theme, the works take us through an intimate, imaginary and surreal journey.
The result is a sort of diary, a narrative that develops through a net of drawings: endless roots, fragments of the artist’s work and clips from her previous videos that are all like blood vessels of a life journey.

This project is a journey in the mid of life, where one day somehow follows the other, between sunrise and sunset; perhaps it’s part of a greater journey that starts with birth and ends with death…” (Luisa Rabbia)

The video Travels with Isabella, Travel Scrapbooks 1883/2008 was conceived during the artist’s residency at The Isabella Stewart Gardner Museum in Boston. Luisa Rabbia was inspired by the photographs collected by Isabella Stewart Gardner (1840-1924), during her journey through China in 1883, to create an entrancing animated trail: a scenario of images from ancient China on which she composes her personal diary made of drawings, video footage from her previous works and works from the museum collection.

In the installation The following day, no one died, placed on one of the large walls of Fundación PROA, the porcelain marks interact with her father’s ECG as if extending the past into the present, to let that distant moment in time live on, the script of life…

Gallery 4 and Contemporary Space. Alejandra Seeber
23.01.2010
Gallery 4 and Contemporary Space. Alejandra Seeber
She presents the site-specific work: Dialogville, 2009. The monumental wallpaper carrying its own history illustrates a space driving through the blurred limits between theatricality and art. On another space, her already known Bubbles outline the conversational space. Glass sculptures created though the free blowing technique bring to mind the conversation balloons found in comic books, yet in this case, appear empty of words. The pieces will appear close to the Librería PROA and Café PROA, places were the visitor circulates, interacts and meets.

"Unseen voices" brings together work by two artists who turn to literature, as well as film and architecture, to reflect on the present and its links with the past. Alejandro Cesarco and Jorge Méndez Blake present the voices of Marguerite Duras and Jorge Luis Borges, among other authors. Their works are not limited to illustrating literature, or quoting written text, or making explicit the assumptions of their artistic practice. In these works, a very different dynamic between word and image is at play.

How to understand the present? How to access the here and now? We might answer that we need to know the past in order to explain the present and project ourselves into the future. We know, however, that history consists of thousands of facts that can be interpreted from thousands of points of view. We will never be able to reconstruct the full meaning of the past. This impossibility, far from leading us to surrender or relativism, merely renews the burning questions about our present. There must be a way of thinking and measuring time apart from chronometers and calendars, urges Jean-Luc Nancy, a key figure in contemporary culture. And Nancy commits himself to the “today,” seeking to give meaning to its fragments. The works exhibited in "Unseen Voices" engage in this search, proposing spaces that open time and allow us to explore the present, in a sort of interval, outside the furious succession of minutes into which the world plunges headlong.

When turning to the past, when reading it, these works make it present. They put on display voices that offer differences, new connections, without speaking uniformly or arriving to a definite resolution. Cesarco, Méndez Blake, Borges, Duras, Link: do they say the same thing? Or do they exhibit irreducible languages with specific and singular incumbencies? I would say that in these works there is no discourse, from one voice to the next, seeking to reach a conclusion. Instead, there is, once again according to Nancy, a “suspended step.” We cannot force from the juxtaposition of voices a higher meaning. Not even these works are fixed structures, nor are we monolithic spectators. It would seem the only thing permanent is change, as Cesarco once pointed out when explaining his artistic vision.

If the voices presented by Cesarco and Méndez Blake are in various states of agitation, it might be because they respond to a kind of restlessness manifested in the very space of these works. Both artists account for an implosion that occurred long ago, breaking the unique and singular artwork into many fragments, expanded throughout the exhibition space. Instead of beholding at a distance, we must now enter into these open zones: walk, read, view and explore their splinters, glimmers, shatters. Literature, then, would not be the only "other" in these works. These works embrace the "outside," are made of "other parts" that do not even seem to refer to art. The frame and the pedestal provided a type of support that is far gone ―as far as the certainty of interpretation. We must face this openness; we have no other choice than going through it, accompanying its elucidation. Inside these spaces, each of us can engage in dialogue, breaking or emphasizing words and whispers. Similarly, each of us can ponder about these spaces, imagine them anew, and, in so doing, transform the present.

The curatorial premise of "Unseen Voices" responds to Fundación Proa’s own architectural section, where the library is not only located alongside the exhibition galleries, but also is placed in the center of the building. In this way, tuned to current sensibility, Proa does not restrict culture into areas of competence, but opens to the complexity and intensity of contemporary experience.

Alejandra Seeber, Argentine artist residing in New York, presents two works with a common discourse. On one hand, a wallpaper mural located in Gallery 5. This O'reverie Wall, made specially for PROA, grasp, through Seeber's gestures, the history, the memory, and the value of the image in order to reconstruct a period, a character, and way of observing the world.

This works, made specially by the artist for Fundación PROA, demonstrate in a clear and sintetic manner Seeber's artistic universe, linked to memory, the rediscovery of painting and the subjectivity of images throughout history.

The works
O’Reverie Wall, 2009
Paint, fresco and layers of wallpaper
In O’Reverie Wall, a wall unveils the memory of a room through by layering different wallpapers, frescos and paint, later teared by the artist. It suggests the passing of time in an architectural interior. It’s about constructed and fictional history of a room that had different purposes: as a child bedroom, a teenagers punk rock shelter, a school classroom, a store on sale, a dancehall, and a garage. The wall lets the imagination run through the events and the lives of those who lived there.

Connected directly with the mural painting tradition, Seeber uses industrial elements: the wallpapers to tell stories. Each wallpaper becomes someone’s presence and expects that through the industrial imagery available, time, moments and occupations can be recognized. Trough this method, the images become archeological symbols in a big city.

In a corner, a black hole cuts through the chromatic effect of the mural through an empty shredded wall, making the artists touch even clearer: disclosing, re-discovering, this metaphor of the black hole that rests next to the remains of a staircase, from a past rescue operation, with abstract lines imprinted on a perished building.

Dialogville, 2009 – 2010
Dialogue bubbles lacking works. The work is composed of transparent glass sculptures created by means of the free blowing technique that reminiscent of the comic language, but located, in this case, empty of text, phrases or conversations. The absence of words or a space open for multiple conversations? The artist focused on grouping this dialogues of group conversations in the spaces of circulation within the foundation: outside the exhibition galleries, on the auditorium entrance, corners of reason.
The bubbles located in this corners mark the space of a past dialogue: loving, political, violent, artists…? Also in this piece, Seeber demonstrates her artistic field for the reconstruction of history, time though symbols, vulgar and universal imagery on the global age.

The selected artists, Elba Bairon, Esteban Pastorino, Mirtha Dermisache and Alejandro Cesarco (with the collaboration of Ana Katz), step into the different spaces within the Foundation, recreating its architecture and developing new languages.