The exhibition features over 50 works from an international group of contemporary artists working in all media, including Glenn Ligon, Marilyn Minter, Petah Coyne, Bill Viola, Tracey Emin, Isaac Julien, Luisa Lambri and many others, with recent works which provide an engaging multi-generational exploration of desire. One provocative aspect of the show is not its imagery, per se, but the manner by which many of the works translate intimate experiences into art- a public expression. 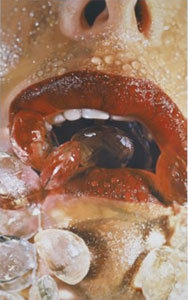 This February, The Blanton Museum of Art at The University of Texas at Austin investigates the notion of desire in an exhibition of the same name. Curated by Annette DiMeo Carlozzi, Blanton curator of American and contemporary art and director of curatorial affairs, the exhibition features over fifty works from an international group of contemporary artists working in all media, including Glenn Ligon, Marilyn Minter, Petah Coyne, Bill Viola, Tracey Emin, Isaac Julien and many others. The accompanying illustrated catalogue will contain texts by art critics, fiction writers, poets, performing and visual artists, all written in direct response to the works of art in the exhibition.

Carlozzi states, "Desire is a complex human emotion and a driving force in our lives from childhood through old age. We all can recall examples of literature, film, and music that are rife with expressions of physical desire, but how do contemporary visual artists portray it, and all its attendant psychological states—anticipation, arousal, longing, regret, and so on? Desire assembles a really broad range of compelling works that together present a surprisingly diverse portrait of the experience."

One provocative aspect of the exhibition is not its imagery, per se, but the manner by which many of the works translate intimate experiences into art- a public expression. Marilyn Minter’s Crystal Swallow would seem to capture a private moment of visceral response, yet in such detail and exaggerated scale that it becomes a grotesque advertisement for arousal. Glenn Ligon’s series, Lest We Forget, commemorates those flickers of romantic fantasy that sometimes occur while people watching. And Tracey Emin’s You Should Have Loved Me is an accusation from a lover scorned, created with the neon light of public signage as if to broadcast raw feeling to an uncaring world.

There will be a full range of public programs in conjunction with the exhibition, including a special film series curated by The Austin Film Society and a conversation with artists Glenn Ligon and Marilyn Minter. See the website for details.

Desire is organized by the Blanton Museum of Art. Funding for the exhibition is provided, in part, by a grant from Houston Endowment Inc. in honor of Melissa Jones for the presentation of contemporary art at the Blanton.

Blanton Museum of Art
The University of Texas
MLK at Congress (200 East MLK) Austin, Texas 78701
The museum is located at the intersection of Martin Luther King and Congress Avenue and is open Tuesday though Friday from 10-5, Saturday from 11-5, and Sunday from 1-5. Thursdays are free admission days and every third Thursday the museum is open until 9 pm. Admission is free to members, all current UT ID-holders, and children under 12, $7 for adults, $5 for seniors, $3 for college students with valid ID, and $3 for youth (ages 13–21). For information call (512) 471-7324