Paris and the Avant-Garde 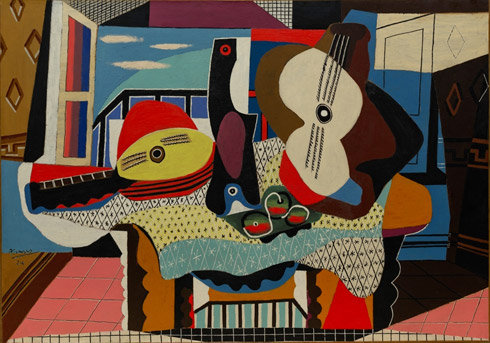 Modern Masters from the Guggenheim Collection

As one of the final exhibitions of the Solomon R. Guggenheim Museum’s 50th-anniversary celebrations, Paris and the Avant-Garde: Modern Masters from the Guggenheim Collection presents thirty-four works by eighteen artists from the Guggenheim Museum’s collection, including significant groups of sculpture by Constantin Brancusi and Alexander Calder. The exhibition is curated by Tracey Bashkoff, Curator of Collections and Exhibitions, and Megan Fontanella, Assistant Curator, and is on view from January 23 through May 12, 2010.

Paris and the Avant-Garde: Modern Masters from the Guggenheim Collection is supported by a grant from the Joseph and Sylvia Slifka Foundation.

During the first decades of the 20th century, numerous painters and sculptors migrated to Paris, which had become the international nexus for vanguard art. Bringing with them their diverse customs, these artists absorbed and contributed to the latest creative developments, often fusing novel formal elements with aspects of their respective local traditions and individual interests. Although the artists associated with the École de Paris (School of Paris) did not adhere to a fixed style typical of a school, they were united in their defiance of academicism.

One of the stylistic innovations during this period was Cubism, the name of which was accidentally coined in 1908 by French critic Louis Vauxcelles, who intended it to be derisory. Its leading practitioners were Georges Braque and Pablo Picasso, who first met in 1907. Inspired in part by Paul Cézanne’s geometrized compositions, they created the simplified and faceted forms, flattened spatial planes, and muted colors that came to be associated with Analytic Cubism. The new technique blossomed with stunning rapidity from its inception through 1914, and led to further artistic experimentation among such painters as Marc Chagall, Robert Delaunay, František Kupka, and Fernand Léger, and sculptors like Brancusi.

Following the slowed productivity that occurred during World War I, the Parisian avantgarde resumed its heightened activities. Synthetic Cubism, which had emerged by 1913 and featured brighter colors, ornamental patterns, undulating lines, and rounded as well as jagged shapes, was common into the 1930s. The adherents of Surrealism—a movement inaugurated when André Breton published his first Surrealist manifesto in 1924—were also counted as part of the School of Paris. These writers and artists, drawing in part on the theories of Sigmund Freud, attempted to give form to, or articulate notions of repressed desires, dream imagery, and the unconscious mind. Some juxtaposed dissociated images and incongruous objects, while others concentrated on automatism—drawing without a premeditated composition or subject.

With the outbreak of World War II in 1939, the center of the art world shifted as numerous European artists, including many of the Surrealists, sought refuge in New York. Léger, Matta (Roberto Antonio Sebastián Matta Echaurren), and Yves Tanguy, among others, immigrated to the United States around this time. The American sculptor Calder had returned to the United States from Paris slightly earlier, in 1933, with a vocabulary of forms influenced by Jean Arp and Joan Miró that he proceeded to translate into his own language of movement and balance. Other artists, such as Miró and Picasso, remained in Europe, but were regularly featured in stateside exhibitions of the time, allowing an emerging group of American painters to encounter their work. With the end of the war and the advent of Abstract Expressionism, the primarily figurative painters that had embodied the Parisian avant-garde were displaced from the center of the art world.

Education and Public Programs
In conjunction with the exhibition, two Curator’s Eye tours of Paris and the Avant-Garde: Modern Masters from the Guggenheim Collection are offered free with museum admission. These tours take place on Friday, February 19, at 1 pm, with Megan Fontanella, and on Friday, March 12, at 1 pm, with Tracey Bashkoff. For information on all of the education programs offered through the auspices of the Guggenheim Museum’s Sackler Center for Arts Education, visit guggenheim.org/education.