Cultural Olympiad: Inaugural show. Works which mediate the politics of site and the shifting conceptions of territory. The exhibition inculdes contemporary artists who consider Native North Americans' ideas of place and nationhood in relation to the history of colonial encounters in Canada and the United States. New works by Rebecca Belmore, Jimmie Durham, and Cheryl L'Hirondelle, large-scale installations by Matthew Buckingham and Andrea Geyer and drawings by Brian Jungen. 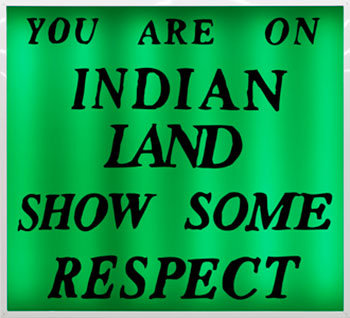 The exhibition is curated by Candice Hopkins, the Sobey Curatorial Resident of Indigenous Art at the National Gallery of Canada.

With its roots in the local history of Vancouver, the inaugural exhibition at Simon Fraser University’s new Audain Gallery First Nations / Second Nature is built of works which mediate the politics of site and the shifting conceptions of territory.

First Nations / Second Nature inculdes contemporary artists who consider Native North Americans’ ideas of place and nationhood in relation to the history of colonial encounters in Canada and the United States.

Artworks include a lightbox by American artist Sam Durant which illuminates the words "You Are on Indian Land Show Some Respect." The text is a faithful reconstruction from archival photographs of a handmade protest sign of Native American civil rights protests in the United States. It is part of a larger Durant series that considers how historical moments gain new interpretations and presence in the present.

"Deeds/Nations" and "Deeds/Abstracts: The History of a London Lot", by the late Greg Curnoe, investigates the settlement history of London, Ontario. Just prior to his death, Curnoe attempted to record every person who has lived in the London region. His aim was to return to the public record the First Nations members who signed the original land surrenders, together with other First Nations people and settlers of the period. This research and archive based work, brings together his original research material, ephemera and paintings.

Pia Fuchs (German ID of Patricia Reed) contributes Untitled (Pan-National Flag), which broadly questions how territory is defined and publicly symbolized. It combines the outlines of flags from each country recognized by the UN, creating an almost absurd national emblem.

A newly commissioned work by Vancouver artist Rebecca Belmore will be in the Hastings Street window of the gallery.

The show also includes a new work from Jimmie Durham, an important figure in contemporary indeigenous art, a work from Cheryl L’Hirondelle in collaboration with Andrew Lee, and a photo-text installation by New York-based artists Andrea Geyer and a large-scale installaion by Matthew Buckingham, also of New York.

Image: Sam Durant, You Are On Indian Land Show Some Respect, 2008. Photograph by: Handout

The Audain Gallery’s mandate is to advance the production and presentation of contemporary visual art in Vancouver and internationally, through a responsive program of exhibitions in a flexible project space. The gallery will encourage conceptual and experimental projects as it explores the ways in which contemporary art is socially and politically formed – and formative.
Another central and vital aspect of the gallery’s mandate is community engagement. Exhibitions and coordinated events will be specifically designed to engage the SFU community, the general public of Vancouver, and most crucially, the neighbourhood communities of the Downtown Eastside. The Audain Gallery will host annual projects/exhibitions with artists-in-residence, and collaborations with international and local art institutions. It will also serve as a vital aspect of the visual arts program at SFU’s School for the Contemporary Arts, which will be housed in the SFU Woodward’s complex as of September 2010.
The Audain Gallery has been named for Michael Audain, philanthropist and chair of Polygon Homes Ltd., whose
Audain Foundation made a major donation to SFU’s School for the Contemporary Arts.
The curator of the Audain Gallery is SFU Contemporary Arts faculty member Sabine Bitter.