The exhibition features the work of leading artists who grew up in the former Eastern Bloc and have emerged as international artists during the last decade - Althamer, Kusmirowski, Macuga, Mir. The show also includes leading figures of the Eastern and Central European avant-garde from the 60s and 70s - Filko, Kabakov, Koller - together with other leading contemporary Western artists who have worked behind the former Iron Curtain - Jane and Louise Wilson, Otolith Group. There is a congress that explores the theoretical strands of the exhibition with some artists, curators, researchers and writers whose combined work represents the most progressive, and provocative, thinking on the contemporary relevance of the future under communism. 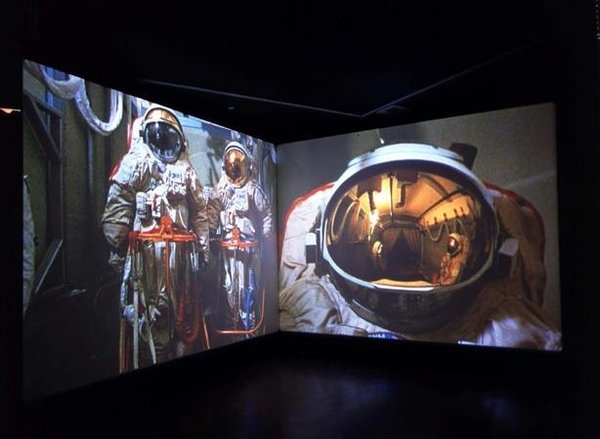 How was the future imagined under Communism – and why is that vision so important to us today? These are the questions that Star City, named after the USSR’s secret cosmonaut training base, sets out to explore.

It features the work of leading artists who grew up in the former Eastern Bloc and have emerged as international artists during the last decade – Althamer, Kusmirowski, Macuga, Mir. Star City also includes leading figures of the Eastern and Central European avant-garde from the 60s and 70s – Filko, Kabakov, Koller - together with other leading contemporary Western artists who have worked behind the former Iron Curtain – Jane and Louise Wilson, Otolith Group.

The 60s Space Race was a fierce propaganda battle between communism and capitalism, as much as a technological competition. Space in all its manifestations – technological, political, imaginary - is an important part of Star City.

Pawel Althamer’s record of his “alien’ explorations, together with the golden clad fellow residents of his Soviet-style apartment block in Brodno, Poland, includes an “expedition” to Brasilia, the massive, modernist Post-War capital of Brazil. Look out for lost golden space people around the exhibition.

Downstairs in The Space you can explore the innards of Mother, Earth, Sister, Moon (2009), an enormous homage to Valentina Tereshkova, the first woman in space and the deity of our exhibition, here fallen to earth with what looks like a thud. Futuristic fashion shows will be staged inside her. The spiritual aspect of space exploration, tapping into an older Russian religious mysticism, are further explored in Aleksandra Mir’s collages of religious icons, coupled with Cold War space ships.

The exhibition also contains real objects and propaganda of the period, including USSR Space Race posters, a life-size replica of a Sputnik, space food and a collection of Polish space toys.

Jane and Louise Wilson’s film Star City, made among the ruins of the Soviet space race, will be shown on four large screens that will transport the viewer to the still secret location in woodlands near Moscow. The Otolith Group made sections of their film in weightless conditions there, too.

The science fiction of the Eastern Bloc in the Cold War period was viewed as a serious art form that encompassed philosophy, as in the work of Stanislaw Lem. Some was sanctioned, but some was banned for decades. Often representing a means of escape from the state, and of the grey realities of everyday life, its influence can be strongly felt in Star City.

Deimantas Narkevicius has made an alternative ending to the 70s cult classic Solaris, featuring the original actors. It will be shown in a beautiful wooden cinema, specially created for Star City by Tobias Putrih. The Polish artist Robert Kusmirowski will be dismantling his acclaimed art work Bunker (2009) formerly at London’s Barbican, and converting it into a futuristic scenario for Star City. The exhibition also has various machines that appear to be straight from the pages of sci-fi, including the domestic appliances by the Cuban artist Diango Hernandez’s that are droning a speech by Fidel Castro in morse code, and Micol Assael’s vaguely threatening Elsewhere (2008).

Star City also contains the works of legendary figures of the Eastern and Central European avant-garde, who continued working away from the eyes of the authorities. They include Ilya and Emilia Kabakov, the greatest Russian artists of the Post-War period, whose installation Two Cabinets (1996) represents the privations and pathos of the period. Through the thin walls of a labyrinthine suite of waiting rooms, a patient can be heard talking to a doctor. Through sheer willpower, and a surge of liberating energy, he simply flies out of a miserable existence into space.

Star City revisits a future where progress led the forward march of history – an idea that has fallen into rusty disrepute, alongside the fallen Iron Curtain. In the West - preoccupied with ecological disaster and with our own economies faltering – we no longer look forward - or upward. The ideals of collective action have been largely superceded by individual consumerism. Perhaps, Star City suggests, we need a new planetary perspective. Revisiting the past may help us take one small step towards a shared future.

Star City is part of POLSKA! YEAR The year of Polish Culture.
POLSKA! YEAR comprises more than 200 events promoting Polish culture in the UK. The project takes place under the patronage of HM The Queen and HE The President of the Republic of Poland. POLSKA! YEAR is co-ordinated by the Adam Mickiewicz Institute and supported by the Polish Embassy and the Polish Cultural Institute in London. To find out more visit http://www.PolskaYear.pl

Star City opens with a congress that explores the theoretical strands of the exhibition in the company of some of the exhibition’s artists, together with curators, researchers and writers whose combined work represents the most progressive, and provocative, thinking on the contemporary relevance of the future under communism.

There will be two performances by Otolith Group and by Pawel Althamer.