Both Park Chan-Kyong and Sean Snyder are invested in deconstructing the language of media. Their methodologies are similar to those of an archivist, documentarian, cartographer or journalist-using photography, video, television and film to expose the use of narrative, imagination and fiction in the espousal of political ideologies. The exhibition features recent and newly commissioned work developed over an extended period of exchange and conversation among the artists, and the curators Doryun Chong and Clara Kim. 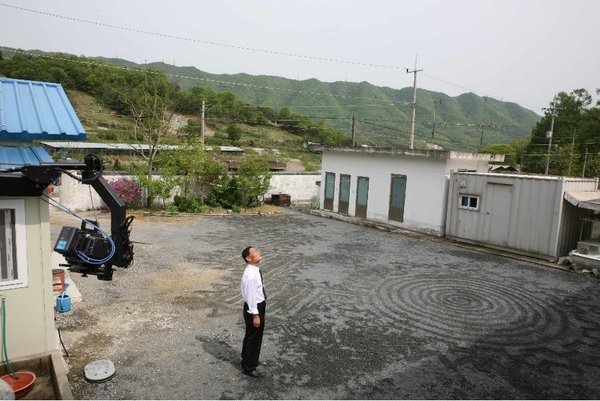 Organized by REDCAT Gallery Director and Curator Clara Kim and Doryun Chong, Associate Curator of Painting and Sculpture at The Museum of Modern Art in New York, this exhibition brings together the work of Seoul-based Korean artist Park Chan-Kyong and Tokyo/Kiev-based American artist Sean Snyder. The two artists first met in Germany in 2002, and their shared interest in North Korea and the politics of the Cold War led to this initial encounter and becomes the impetus for this two-person exhibition titled Brinkmanship. The exhibition will feature new works by Park and Snyder developed over an extended period of exchange and conversation during the preparation of this exhibition, alongside recent works that will provide a broad context for their respective practices.

Park's and Snyder's visual language operates between documentary forms—employing the mediums of photography, film, video and television—and structures of visual essay, as an exposé or dossier to investigate the construction of a collective imagination. Their methodologies are similar to and combine those of an archivist, documentarian, cartographer and journalist. Their almost obsessive research-based processes are rooted in examining specific events, scenarios and situations, which reveal the absurdity, irony and abstraction that belie political and social ideologies.

A term coined during the height of the Cold War, brinkmanship describes the political technique of maneuvering a dangerous situation to the limits of safety in order to secure the greatest advantage. In their work, both artists gravitate towards politically volatile or precarious situations, sites of war, conflict and disasters as well as utopian dreams and ideologies. Both Park and Snyder acknowledge that they were critically shaped by the Cold War realpolitik, especially of the 1970s, and their interests have been undeniably driven by the unresolved yet forgotten brinkmanship of a now bygone era. The recent history of the Cold War is anything but a closed chapter for Park and Snyder, however. At times, they strategically traffic in nostalgic anachronism of that history. At other times, they struggle to dispel it with information and specificities. The push-and-pull that occurs between the two positions result in crossbred clarity and obscurity in both artists' work.

The exhibition will present four discrete works by each artist. Park will present Power Passage (2004)—a two-channel video that connects a joint U.S.-U.S.S.R. space rendezvous during the maniacal space race of the Cold War, with underground tunnels dug by North Korea to infiltrate South Korea. Citing science fiction films including Robert Altman's Countdown (1968) and John Sturges's Marooned (1969), Park links the hunt for underground tunnels and the vastness of the universe as passageways where politics and power intersect with fiction, myth and special effects. In the 13-minute video Flying (2005), he uses footage from unedited source documentation from a South Korean TV station of the first summit between the two Koreas in 2000 after 50 years of division. Edited with the soundtrack of Isang Yun's 1977 composition "Double Concerto" inspired by the Korean myth of the Milky Way, a bridge of birds that allow once-a-year reunion of two lovers banished to two different stars. Yun equated this story to North-South relations. He died in exile, unable to return to his divided country, in a newly reunified Germany. In Sindoan (2008), Park's film locates itself in a sacred valley under the Gyeryong Mountain, which was historically significant as it was to be the new capital of the Joseon Dynasty (1392-1910), and was also believed to be the center of utopia among various neo-traditional and folk religions. The film is a haunting portrait of the location's mystical past and present and encompasses archival-historical and anthropological examination as well as fictional reconstruction. It is also a provocative study of modern society's relationship to superstition and the rational, the real and the imagined, an ambiguous territory where one set of belief system is created in order to dismiss another. The newly commissioned work Three Cemeteries (2009-10) consists of photographs of cemeteries with short explanatory text and accompanying sound. The photographed locations contain different groups of uprooted and displaced populations—such as unidentified Chinese soldiers killed during the Korean War and anonymous female sex workers who worked in the camp towns for American military stations. The muted images and succinct factual descriptions belie the exceedingly complicated politics and the human cost of recent history on the Korean peninsula.

Snyder will exhibit A Revisionist Model of Solidarity (2004-05), an installation of video, photography and text that examines the reconstruction efforts of the city of Skopje (in Macedonia) following an earthquake in 1963. The master plan was designed by the Japanese architect Kenzo Tange based on his earlier urban development model for Tokyo which was then transposed on a European city and interpreted by Yugosloavian architects and foreign contractors. The project explores the inevitable disparity between intent and realization of a utopian project. Casio, Seiko, Sheraton, Toyota, Mars (2004-05) is a video essay that combines still images and video footage from amateur, governmental and photojournalistic sources that explore the conventions and ethics of photojournalism and outlines decades of foreign corporate involvement in Iraq and Afghanistan. Exhibition (2008)—a single-channel video about art, its reception and discourse involved in the production of exhibitions—uses as a subject the Soviet documentary film Noble Impulses of Soul, 1965, by Israel Goldstein and the efforts of a provincial museum in the village of Parkhomivka in Eastern Ukraine, where an exhibition of contemporary Mexican art was presented at the museum accompanied by an art history lecture at a village farm. The reprocessed video restructures the primary components, eliminates the voice of the narrator, and reorders the chronology of the film to break the continuous realistic world of documentary. Snyder will also present a new work titled Smoke in Mirrors (working title) (2009-10) as part of his ongoing research into North Korean media and image production. The video essay takes as its subject the evening TV news of DPRK State Media and, in particular, the 'News of the World' segments which depict the outside world as a horrific spectacle.

This is the first significant exhibition in the U.S. of both artists' works. In conjunction with the exhibition, the artists will give a talk with exhibition co-curator Doryun Chong on Saturday, February 13 at 6pm, followed by the opening reception.

ARTIST BIOS
Park Chan-Kyong (b.1965, Seoul) is an artist, filmmaker, and writer based in Seoul. Park received a BFA at Seoul National University and a MFA at the California Institute of the Arts. Park has participated in numerous group exhibitions, including Facing Korea: Demirrorized Zone at the De Appel in Amsterdam (2003), Parallel Life at Frankfurt Kunstverein (2005), the 5th Busan Biennale (2006), the 6th Gwangju Biennale (2006), Oberhausen International Short Film Festival (2007) and Unconquerable at Museo Tamayo Arte Contemporáneo in Mexico City (2009), as well as solo exhibitions at Sszamie Space, Artsonje Center, and Atelier Hermès, all in Seoul. Park served on the editorial board of Journal BOL and as director of Alternative Space Pool. He was awarded the Akademie Schloss Solitude Fellowship in 2002 and the Hermès Korea Art Prize in 2004.

Sean Snyder (b. 1972, Virginia Beach, VA) studied at the Städelschule, Hochschule für Bildende Künste in Frankfurt. Snyder has had solo exhibitions at the Institute of Contemporary Arts in London (2009), Stedelijk Museum in Amsterdam (2007), Van Abbe Museum in Eindhoven (2006), Wiener Secession in Vienna (2005) and Portikus in Frankfurt am Main (2005). He has participated in group exhibitions including Brave New Worlds at the Walker Art Center in Minneapolis (2007), the 5th Busan Biennale (2006), the 6th Gwangju Biennale (2006) and the 9th Istanbul Biennale (2005) among others. Snyder has also written for e-flux journal, starship, Metropolis M as well as texts for his exhibition books and catalogues. Snyder lives and works in Tokyo and Kiev.

Brinkmanship: Park Chan-Kyong and Sean Snyder is made possible with support from The Andy Warhol Foundation for the Visual Arts and the Nimoy Foundation. Additional support provided by Arts Council Korea and Samsung.

REDCAT is located at the corner of W. 2nd and Hope Streets, inside the Walt Disney Concert Hall complex in downtown Los Angeles (631 West 2nd Street, Los Angeles, CA 90012).
Open Tuesday through Sunday from noon to 6:00pm or until intermission. It is closed Monday and major holidays.
Admission is always free.