Throughout the duration of this exhibition several devices will be installed in the exhibition space, which will in turn become highly charged with energy that fosters cell regeneration and cerebral stimulation. The organisers request that all members of the public who plan to attend this experiment prepare physically and mentally in advance. 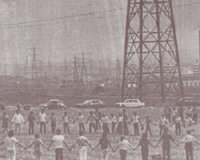 …at that point my colleagues and I began experiencing the first of several extreme onsets. None of us spoke at the time but discussion afterwards revealed that each of us present in the room were somehow quietly convinced that we were entering a higher level of consciousness…
- participant of one of the first Aion Experiments (Aion 01B) 1943.

This experiment differs from some of the more intensive previous Aion Experiments in which volunteers remained under close observation for prolonged periods. Throughout the duration of this exhibition several devices will be installed in the exhibition space, which will in turn become highly charged with energy that fosters cell regeneration and cerebral stimulation. The organisers request that all members of the public who plan to attend this experiment prepare physically and mentally in advance, as the Gallery will be charged with biofield energy. The organisers also wish to notify visitors that effects of this Aion Experiment may only become apparent in the weeks following the event.

The first Aion Experiment took place in Northern Europe in the 1930s, instigated by a team of practitioners from diverse disciplines including physics, chemistry, psychology and sociology. Since its inception the Foundation has stated that one central aim unifying its diverse members and affiliates is the desire to develop a greater understanding of the phenomena of body-oriented energy. To this end, numerous experiments have been undertaken, involving countless participants. In an attempt to heighten the results of the experiments, they often take place in temporary laboratories, erected upon sites identified – at some point in history – as charged with naturally occurring biofield energy.

One of the many motives driving the ongoing work of the organisation is a conviction that the human species is unaware of its own true potential. Another unifying belief is that humans have, for the most part, become detached from certain fundamental truths and blind instinctive necessities. Statements issued by the Foundation propose that unless the current situation is rectified radically and promptly, the human species is headed inexorably toward untimely self-destruction.

Like the Aion Experiments themselves – which can assume limitless permutations – the international foundation is distinguished by its quiet public profile. Although numerous respected and admired scientists and practitioners – including Nikola Tesla, Marie Curie, Wilhem Reich and Alfred Kinsey – openly associated with Aion Experiments for a time all information pertaining to work carried out by, and individuals involved with, the Foundation, has become strictly confidential in the past decade. It is known that practitioners working in the realm of visual artists have, on several occasions, been invited to contribute in an advisory capacity to Aion investigation. This is perhaps an indication that the visual arts remain a potent source of untapped potential in terms of maximising human capabilities. The practitioner whose involvement with the Foundation is most renowned is the Swiss artist Emma Kunz (1892 - 1963) who collaborated with the foundation in the momentous discovery of Aion A, a rock crystal with potent healing potential.

To mark the closing of Aion Experiments an event will take place at 7pm on Friday the 9th of April. Entitled The Luminiferous Aether, it comprises of documentation made by Robin Watkins of low frequency audio signals which originate from the streams of charged particles that reach the Earth's atmosphere through the Solar Wind, giving rise to the Aurora Borealis and other magnetic storms. With temperatures dropping to minus 50° C, the field recordings of Solar radiation were made during three consecutive days and nights outside of a small village in the remote Yukon-Koyukuk region (the Arctic Circle, Alaska). For the Project Arts Centre sound screening, listeners will collectively experience the work through individual radio headphones and receivers, grouped in front of a central transmitter.

Aion Experiments has been organised by Pádraic E. Moore, who wishes to acknowledge the research and production of Morris/Trasov Archive (Canada), Sam Keogh (Ireland), Takeshi Murata (U.S.A.), Ulf Rollof (Sweden) Ciarán Walsh (Ireland) and of course the Foundation for Aion Research, without whom this project could never have taken place

Project Arts Centre is a multidisciplinary arts centre, with a gallery and two theatre spaces, located at the heart of artistic activity in Dublin. For the archive of exhibition and events from the visual arts programme, follow http://www.projectartscentre.ie/archive/visual-arts .