Imagine. These new paintings reflect the ambiguity that is culturally allotted with the color black. Black is central in the use of line and color as a way of forming meaning in the large-sized canvases. 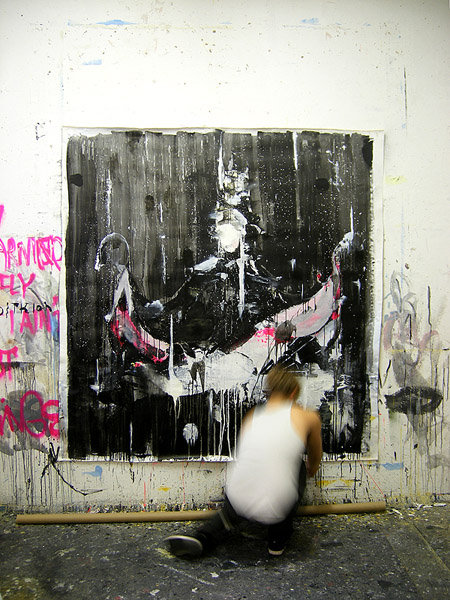 Black is that nothingness, the epitome of the absence of all light. It is the color of melancholy, sorrow and death. Simultaneously black stands for energy, creativity and fertility – darkness is already in the Bible the primordial source of the divine creation of life.

The new paintings of Lars Teichmann reflect the ambiguity that is culturally allotted with the color black. Black is central in the use of line and color as a way of forming meaning in the large-sized canvases. Teichmann’s paintings are just as melancholic as they are dynamically alive. The reduced color palette flows into vibrant energetic brush strokes: In a powerful gesture monochrome black is punctuated by white lines, wide swings, speckles and dissolving surfaces. In other works, the coloring-order returns as black masks grayish white and rosé. In some cases the quasi-monochromatic is contrasted with bright pink accents. The striking chiaroscuro bridges the gap to Rembrandt, but also to the dramatic mood lighting of Caravaggio or the mystical, mysterious, almost expressionistic acting late Mannerist pictures of El Greco - the tense relationship of light and shadow comes in, to represent the full range of mental sensations.

At the same time, Teichmann's painting always remains semi-abstract. His visual worlds act objectively, without being too caught up in the concrete. Abstract areas, dashes and spots draw spaces, faces and bodies. Across graphic lettering in the style of graffiti writing meanders a Baroque figure, spiral of animals, gods and cherubs. In the darkness dancing dervishes stand next to interior scenes that refer to classical images of the artist in his studio, and yet maintaining the playful, breathe easy aura of contemporary comic book drawings. Full body portraits that are reminiscent of the court-painter Velázquez and Van Dyck, alternate with Cubist-like body structures.

The young artist is confident in an innovative formal language that references history, as the citation of art is simultaneously the discussion of its overcoming. For example, in the recent work of Lars Teichmann the logical development of a series of black figures has risen during 2005 to 2007. Compared to the black in the earlier cycles of paintings in close ties with the figures, it has emancipated itself in the recent work on an independently operating medium. Blackness is the primary substance from which the vibrating life of Teichmann's world of images feeds on. Visual worlds that confront the viewer, as in a film noir, with fragile, incomprehensible, and cruel visions while simultaneously remaining constant, tangible and sensuous.

Lars Teichmann (born 1980 in Chemnitz) studied painting at the University of Arts, Berlin with Wolfgang Petrick and Daniel Richter and finished his studies in 2008 under Valerie Favre. 'IMAGINE' is the third solo exhibition of the artist in the gallery KUNSTAGENTEN. In parallel, the Berlinische Galerie will present works by Teichmann during the exhibition ''Berlin transfer. Young Art at Berlinische Galerie and GASAG'' Presented, (March 05 – May 24, 2010).