Abstract Art in South and North America, 1920s-50s. Featured are more than 90 paintings, sculptures, prints, photographs, drawings and films drawn from the collection of the museum, along with loans from public and private collections and galleries across both continents. Presenting works by 68 abstract artists from Argentina, Brazil, the United States, Uruguay and Venezuela is being organized as a spectacular finale to the Newark Museum's 2009-2010 Centennial Celebration. 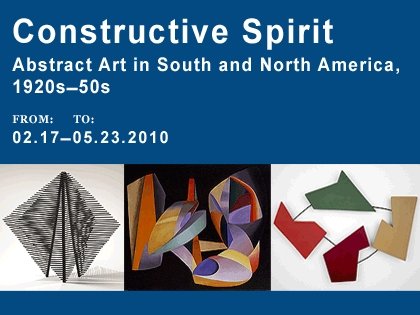 A groundbreaking exhibition presenting works by 68 abstract artists from Argentina, Brazil, the United States, Uruguay and Venezuela is being organized as a spectacular finale to the Newark Museum’s 2009-2010 Centennial Celebration.

Constructive Spirit: Abstract Art in South and North America, 1920s-50s investigates the formative geometric abstract art movements of Argentina, Brazil, the United States, Uruguay and Venezuela. Opening on February 17 through May 23, 2010 at the Newark Museum, located in Newark, NJ, USA, this exhibition is the first to explore the conceptual connections and exchanges that existed between abstract artists in South and North America.

Featured are more than 90 paintings, sculptures, prints, photographs, drawings and films drawn from the collection of the Newark Museum, along with loans from public and private collections and galleries across both continents. Artists include Alexander Calder, Joaquín Torres-García, Jesús Rafael Soto, Gyula Kosice, Lygia Clark, Ellsworth Kelly, Geraldo de Barros and many others. Constructive Spirit is organized by Mary Kate O'Hare, Associate Curator of American Art at the Newark Museum.

The exhibition title – Constructive Spirit – is taken from the 1946 manifesto issued by the Madí, a Buenos Aires-based abstract artists' group that asserted the relevance of geometric abstraction for all countries. The exhibition traces the origins and dispersion of this abstract spirit across the Americas.

Organized thematically, Constructive Spirit brings together works based on conceptual and stylistic relationships that are not limited by chronology or movement. The four sections are titled "Urban Geometries," "Universal Forms," "New Realities," and "Temporal Rhythms."

The cities that witnessed the development of geometric abstraction in the Americas from the 1920s through the 1950s - including Buenos Aires, Caracas, Chicago, Montevideo, New York and São Paulo - were among the most advanced and cosmopolitan in the world. As seen in the opening section of the exhibition titled "Urban Geometries," the geometry of the modern city’s architectural profile and grid plan, its technological and industrial forms, and the vitality pulsating through its spaces presented artists like Joaquín Torres-García, Stuart Davis, Charles Green Shaw and Geraldo de Barros with formal structures and experiences that they translated into an inventive abstract language. Artists and architects like Arshile Gorky and Carlos Raúl Villanueva actively contributed to the transformation of American cities through their large-scale abstract mural and architectural projects that integrated geometric abstraction with architecture.

While the artists in "Urban Geometries" looked to the future and to machine-age science and technology, artists in "Universal Forms" looked to ancient and indigenous American traditions, including Pre-Columbian, North American Indian and native Brazilian cultures. Artists including Joaquín Torres-García, Francisco Matto, George L.K. Morris, Adolph Gottlieb, Josef Albers, Raymond Jonson, Lygia Pape and Leon Polk Smith turned to the indigenous art and cultures of the Americas as alternative models for crafting an abstract vocabulary unique from the machine-influenced constructivist tendencies. Inca stonework, indigenous weaving traditions and pictographic imagery inform much of this work. A small installation of Pre-Columbian and Native American art from the Museum’s collection will accompany these works.

"New Realities" brings together paintings and sculptures by artists whose intentions in turning to abstraction reflect their desire to convey the ‘concrete’ reality of art: pure line, color and form. These artists rejected what they surmised as the false and deceptive "illusions" traditionally used to imitate and represent the natural world, arguing that the work of art is a reality in and of itself. Tomás Maldonao, José Pedro Costigliolo and Burgoyne Diller invented dynamically asymmetrical compositions that express intellectual order and unity, while Waldemar Cordeiro and María Freire paired geometric form with modern materials to invoke an industrial aesthetic. Others like Juan Melé and Charles Biederman were committed to the concept of invention, developing entirely new art forms that challenged traditional artistic media through the creation of the marco recortado (structured or irregular frame) and the structural relief, a new medium that wedded painting and sculpture.

The final section of the exhibition, titled "Temporal Rhythms," features innovative kinetic sculpture and experimental film and photography that incorporate movement, chance and time into the work itself. Artists like Alexander Calder, Gyula Kosice, and Jesús Rafael Soto invited viewers to interact with their art works, provoking them with variable compositions, unexpected sounds and optical effects. In keeping with advancements in science and technology, films and light works by artists including Mary Ellen Bute and Abraham Palatnik reflect the spirit of invention and ingenuity and bring the science of optics and dynamics into modern art in an accessible and visually stunning way. Artists like Geraldo de Barros and Judith Lauand used Gestalt theory to create works that draw upon the viewer’s psychology to suggest that their paintings are in motion. Each work in this section builds a new sense of the viewer’s importance directly into the work itself; the viewer is no longer just a passive observer but an active participant.

Following its premiere at the Newark Museum, Constructive Spirit will travel to the Amon Carter Museum in Fort Worth, Texas, where it will be on view June 26 through September 5, 2010.

A diverse range of public programs complement the exhibition including an international symposium; special lectures; a panel discussion with contemporary abstract artists; a gallery talk by teens for teens; family activities; and hands-on art experiences.

The Newark Museum and the Colección Patricia Phelps de Cisneros present an international one-day symposium on Saturday, April 10 from 10 am to 5 pm that considers the works of South American and US abstract artists featured in Constructive Spirit. A distinguished group of scholars offer new perspectives on such artists as John Ferren, Juan Melé, Charles Biederman, Alexander Calder, Carlos Raúl Villanueva, Josef Albers and Lygia Pape. This forum allows the work and ideas of these artists to be placed in dialogue for the first time.

The Newark Museum is located at 49 Washington Street in the Downtown/Arts District of Newark, New Jersey, just 3 blocks from NJPAC and 10 miles west of New York City.
The Museum is open all year round: Wednesdays through Fridays, from Noon - 5 p.m.; Saturdays and Sundays, from 10 a.m. – 5 p.m., October 1 – June 30; and Saturdays and Sundays, from Noon – 5 p.m., July 1 – September 30.
Suggested Museum admission: Adults, $10.00; Children, Seniors and Students with valid I.D., $6.00. Members and Newark residents are admitted free. The Museum Café is open for lunches Wednesday through Sunday.