Art and City in the 21st Century. Atopia is the feeling of unease experienced by the individual faced with a city that does exist, but which in no case represents the paradise dreamt-of or promised, for the simple reason that the monster that is now the city has taken on a life of its own. With 168 works (painting, sculpture, photography, video and installations) by 41 contemporary artists, the exhibition addresses the tension between individual and city, centring on an urb that is losing its functions of meeting space and realization to become a space of loss and failure. 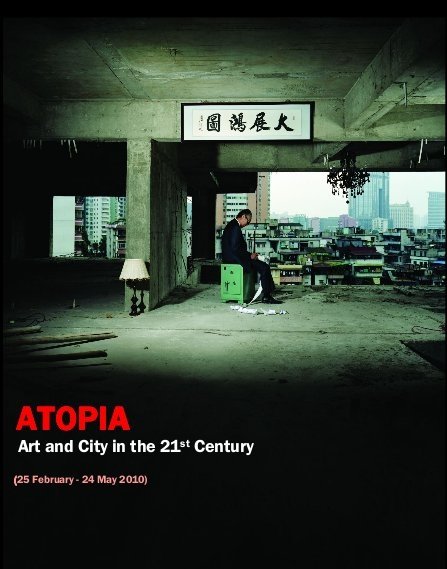 "After the exhaustion of post-modern attempts, the failure to prolong avant-garde dogmatism by means of the sterile substitution of art by ideological processes, in the first decade of the 21st century, art has somehow has recovered. Aesthetic ideas are back, emotion is back, and they have returned via an experience: urban unease."
Josep Ramoneda

From 25 February to 24 May 2010, the Centre de Cultura Contemporània de Barcelona presents "ATOPIA. Art and City in the 21st Century", the Centre’s first exhibition devoted to contemporary art, curated by the director of the CCCB, Josep Ramoneda, and curator and art critic Iván de la Nuez.

ATOPIA is the feeling of unease experienced by the individual in the face of the present-day city which in no way represents the paradise dreamt-of or promised that utopia offers us. The exhibition addresses this unease, the discomfort between the city that does exist and the individual, and the tension between a city that becomes individual (taking on a life of its own over and above nations, countries or states) and an individual who is a mere number.

The exhibition is not one of the recent projects to be based on a social or vindicative phenomenon, nor is it one of the increasing number of projects to denounce issues such as urban speculation or gentrification in cities. What the curators are interested in is a more universal, more palpable agony: that of the individual who survives and what might be termed his existential resistance in the face of urban apotheosis.

Sections of the exhibition

0. Prologue
Thomas Ruff
1. The City versus the Inhabitant
This first section describes the tension between the artist/individual and the city. It presents subjects who continue to fight with the urban phenomenon, whether repeating urban routines to the point of exhaustion or seeking escape in the sewers of contemporary life.
anothermountainman / Loulou Cherinet / Tim Eitel / Carey Young / Emeka Okereke / Mona Vatamanu & Florin Tudor / George Osodi / Andreas Gursky

Transition
Carlos Irijalba
2. The City without the Inhabitant
What we continue to call "the city" has become what might be seen as a post-capital entity, in the two senses of the word: by allusion to its former representative function (the city as a capital of a country, a state, a nation, a community) and to its situation in post-capitalism, at a time when urban events are marked by new economies in which the rhythm of capital, like electronic music, is programmed rather than simply taking place.
This abstract after-city, abandoned to its fate, is the city that we could call ATOPIA. Spaces that do not become specific places, yet nor can they be considered utopian. Our experience has left them behind; though a return to them seems unlikely, nor are they portrayed as something to aim towards.
A speculator must weave fantasies of moving around the empty city; having the city for himself, free of human beings and their intrigues. Something of this perverse fantasy appears in this section. A phantom world; an after-city that decrees the victory of the urbanite over the citizen, of crowd over community, of emptiness over loneliness, and expulsion over welcome.
Nuno Cera / Baltazar Torres / Montserrat Soto / Carlos Garaicoa / James Casebere Tiffany Chung / Dionisio González

Transition
Sergio Belinchón
3. The Inhabitant without the City
Even in the vastest megalopolises—in fact, more there than anywhere else—it is this era of overpopulation that has produced most lonely people. This is why the people who appear in this framework sometimes seem petrified, turned into mechanical beings; absolute sleepwalkers.
What is concealed behind the missing face? A body divided between the limits imposed on it and the urges denied to it, to the point that it loses its most characteristic features. Among other reasons, because these days such features are the driving force of exclusion, separation and marginalization. They wanted to be different but are only recognised as indifferent, a city of faceless actors, where only power has a face. It is the utmost for anyone who dreams of a utopia: looking at someone else and seeing no face—that is, no answer. But at the same time, like all utopias, it is absolutely disquieting.
Dana Schutz / Adrian Paci / Philip-Lorca diCorcia / Enrique Marty / Oleg Dou / Erwin Olaf / Douglas Gordon / Evan Penny / Vanessa Beecroft / Lawrence Lemaoana / Hicham Benohoud / Akós Birkás / Gino Rubert / Erwin Wurm

Transition
José Antonio Hernández-Díez
4. Urban Apotheosis
The city as a possible space; perhaps the only identity left to us. This section includes artists whose examination of the city may be ludic but is never wholly frivolous. Partying, living by night, new spaces, graffiti artists and frivolity, to shake off their disquiet they have recourse to revelry and uproar, violence and indolence, junk and opulence.
Alexander Apóstol / Rafael Lozano-Hemmer / Pedro Vizcaino / AES+F / David LaChapelle / Daniel Canogar / Rogelio López Cuenca & Elo Vega

Centre de Cultura Contemporània de Barcelona CCCB
calle Montalegre 5, 08001 Barcelona
Gallery 2
Opening times
Tuesday to Sunday and public holidays: 11 a.m. to 8 p.m.
Thursdays: 11 a.m. to 10 p.m.
Closed: Mondays except public holidays
Prices
Regular admission: 4.50 €
Combined admission to two exhibitions: 6 €
Concessions: 3.40 € on Wednesdays and for senior citizens, large families, students under the age of 25 and group visits (minimum 20 persons)
Free admission for under-16s, Friends of the CCCB, senior citizens on presentation of a Targeta Rosa, the unwaged, and on the first Wednesday of the month and Thursdays between 8 and 10 p.m.