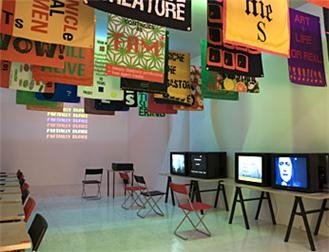 Yerba Buena Center for the Arts (YBCA) announces the largest US presentation of time-based work in fifteen years by internationally renowned artist Renée Green with the exhibition Renée Green: Endless Dreams and Time-Based Streams (Feb 20-Jun 20, 2010). The exhibition features two recent large-scale multilayered installation projects as well as selected earlier works with a focus on film, video and sound as central transmitters for explorations in the arts, humanities and sciences that intersect with the artist’s personal experiences and research. The currently San Francisco-based artist has been creating works of art for more than 20 years that critically assess the intersection of ideas, processes and creativities around a range of topics including contemporary culture, history, fiction, transnational travel, dislocation, migration and cosmopolitanism, as well as feminism and biography. Endless Dreams and Time-Based Streams is presented at YBCA as part of the Big Idea Bridging the Gap which features artists who are engaging in international collaborations and immersive cross cultural investigations.

"Renée Green is a master at melding experience with research to create deeply moving works about the real and imagined histories of individual lives in our mobile contemporary world. It is fitting that the largest US presentation of her work takes place in San Francisco, a center for the intersection of creativity and global media. Since YBCA’s primary mission is to present contemporary artists at the forefront of their fields, we are pleased to dedicate our first floor exhibition spaces entirely to the work of this influential artist," says YBCA Director of Visual Arts Betti-Sue Hertz. "While Green’s work is internationally acclaimed, there has not been a major exhibition of her work in the US in 15 years, and we look forward to introducing her to new audiences through the exhibition Renée Green: Endless Dreams and Time-Based Streams.

Endless Dreams and Time-Based Streams focuses on two large and complex installations, and related new works, that together offer audiences a chance to view many of the major works produced throughout her exceptional career. United Space of Conditioned Becoming (2007) explores passages of time, various lacuna, locations and forms of living via a selection of films, videos, websites, and live events produced over a 15-year span by Green’s (dream) production company Free Agent Media.
Visitors can perceptually travel to Berlin, Los Angeles, Kent State University, Kwangju, Barcelona, Lisbon and Naples at different historical times dating from the 19th through the 21st centuries. Featuring over 35 videos and several sound works, it includes Wavelinks (2002), seven videos shot in New York, Vienna, Berlin, Los Angeles and Barcelona that include interviews with composers of electronic music on topics such as activism and sound, laptop music and sound’s relationship to pleasure; and Unité d’habitation (2006), which revisits the site of Green’s earlier work from 1993 about the famous apartment block in Firminy, France, designed by Le Corbusier. New features include Animation Activation Space where audiences can listen to readings from Green’s manuscript of writings titled Other Planes of There and an outdoor projection viewable in the evenings featuring a trailer of F.A.M. videos.

In addition, the installation Endless Dreams and Water Between (2009), a commission from the National Maritime Museum, Greenwich, UK, makes its US premier at YBCA. It includes banners with "space poems," audio works, a feature length experimental film, three short films and printed ephemera. Sensations and perceptions are intertwined with various histories, sites and people surrounded by water. The installation unfolds from a script written by the artist containing a series of long, contemplative letters exchanged between four female characters and their engagement with a memoir by French novelist George Sand. It is saturated with images of the sea as well as the Bay Area, Manhattan and Mallorca, locations where the fictional characters live. Since 1991, Green has lived and worked in Austria, Portugal, Spain, Germany, France, Italy, and the U.S. and exhibited in the previously mentioned locations and also in Venezuela, Istanbul, South Africa, South Korea, Switzerland, Czech Republic, Poland and the U.K. Her writings have been included in many publications worldwide and have been translated into French, German, Spanish, Portuguese, and Italian. Her first large-scale exhibition in the U.S. titled World Tour took place at the Museum of Contemporary Art, Los Angeles, over 15 years ago in 1993, which predates almost all the work in Endless Dreams and Time-Based Streams.

The catalogue for Endless Dreams and Time-Based Streams includes interpretative texts, film scripts, documentation and reproductions of works exhibited in San Francisco. Its aim is both to illuminate and illustrate the depth and range of Renée Green’s work in the context of her most recent productions, as well as to provide a reference to her work in film, video, and sound, including bibliographic material referencing Green’s production from different countries.

This exhibition is organized by Betti-Sue Hertz, director of visual arts at YBCA.

In conjunction with the exhibition, a lecture by Renée Green takes place on Fri, Mar 5, 2010 from 6-8 pm in YBCA’s Screening Room and is free w/ gallery admission. Renée Green plans to speak about the significant role time-based media has played in her multi-layered installations, especially in relationship to her Free Agent Media (dream) production company’s wide-ranging activities. Co- presented with the San Francisco Art Institute’s lecture series Spheres of Interest: Experiments in Thinking and Action.
Other public programs including lectures/performances by filmmakers and musicians and public readings from Green’s extensive writings with musical accompaniment are organized by Julio César Morales, adjunct curator at YBCA.