Preceding the reinstallation of the collection in July 2010, "Silent Revolution" is a singular presentation one that juxtaposes key works of classical modernism with central positions of contemporary art. The galleries accommodate a series of highly divergent works, and the results range from the lively dialogue, primarily of installation, sculptural, photographic, and video works. With five large-format slide projections, several photo series, and a song project for the Internet, K21 presents an overview of the work of Belgian artist Ana Torfs. In precisely choreographed audiovisual constellations Torfs brings to life literary, historical and political material. 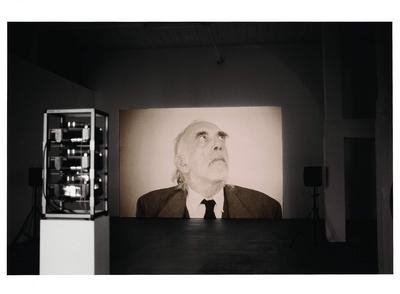 The foundation of the Kunstsammlung Nordrhein-Westfalen is an art collection of the highest conceivable quality. Preceding the reinstallation of the collection in July 2010 in an area measuring more than 10,000 m² is a singular presentation in the Ständehaus of K21, one that juxtaposes key works of classical modernism with central positions of contemporary art. The galleries accommodate a series of highly divergent works, and the results range from the lively dialogue, to the "quarrelsome duet," to the intimate conversation, but also include small talk, while some encounters may lead to subsequent rendezvous.

Since the presentation at Grabbeplatz has always consisted mainly of paintings, and the one at the Ständehaus primarily of installation, sculptural, photographic, and video works, this exchange also takes place between two and three dimensions. The outcome is a contest between media: what can painting offer, with its dense surface arrangement, and what is offered by film, which unfolds in temporal succession?

The arrival of the panel paintings, moreover, calls for an altered approach to the architecture of the Ständehaus. For this presentation of the collection, the building's arcades will be occupied by "immaterial" art forms: with sound installations that conceptualize the phenomenon of time in various ways.

Silent Revolution, the title of this presentation, was borrowed from a work by Georg Herold, one that engages in dialogue with paintings by Jasper Johns and Georges Braque.

The classical modernism foundation of the Kunstsammlung Nordrhein-Westfalen is featured in the 1st level of Silent Revolution in a series of striking, dialogic juxtapositions. Belgian artists Marcel Broodthaers and René Magritte joined forces with contrasting interrogations of the museum and of truth; Jeff Wall und Wassily Kandinsky visualize the antagonism between chaos and order; Max Beckmann and William Kentridge draw up résumés of their lives; Paul Klee and Nam June Paik are preoccupied with the universal languages of art and music.

In the second upper story of the Ständehaus, key works of Cubism, Neue Sachlichkeit, and Surrealism provoke commentary in the form of contemporary sculptures by Thomas Schütte, Katharina Fritsch, Paloma Varga Weisz, and others. One such juxtaposition is that between Beckmann's brutally dispassionate depiction of murder in "Die Nacht" (The Night) and Thomas Hirschhorn's model of a two-family house, which exemplifies the kind of involuntary proximity of contrary attitudes.

More than 30 three-dimensional works have been assembled to form a densely configured sculpture garden – installed with assistance from Düsseldorf artist Markus Karstieß – where viewers are invited to stroll and linger. Pablo Picasso's bronze head of "Fernande" encounters John Chamberlain's painted sculpture, while works in plaster by Max Ernst mingle with recent artistic positions, including loans designed to complement the collection in striking ways.

With five large-format slide projections, several photo series, and a song project for the Internet, K21 presents the first museum-based overview of the work of Belgian artist Ana Torfs (born 1963 and, lives and works in Brussels).

Representation and visualisation, reality and fiction form the cornerstones of Ana Torfs’ installations which consist of projected images (usually black and white slides) and texts.

In precisely choreographed audiovisual constellations Torfs brings to life literary, historical and political material. In these projects the artist works with actors who embody their roles in a demonstratively matter-of-fact and functional way. Documents on Joan d’Arc, a famous one act play by the symbolist poet Maurice Maeterlinck but also testimonies from Rosa Luxemburg and Karl Liebknecht’s murder trial serve as starting points for room-filling installations such as "Du mentir-faux" (About Lying Falsehood), 2000, "The Intruder", 2004, or "Anatomy", 2006.

Apart from a selection of earlier works, the recently completed slide installation "Displacement" (2009) will be shown for the first time at K21.

This work came about with the support of the Baltic Art Centre, Visby. The Swedish island of Gotland, which Ana Torfs got to know during a production-in-residence in 2007, inspired her to create a remake of Roberto Rossellini’s "Viaggio in Italia"/"Journey to Italy" (1954), a classic Italian film on the threshold between neorealismo and nouvelle vague. Alternating black and white photographs of a both magical and sparse insular landscape, which is clearly defined by its military function during the Cold War, are projected into the room. These images are accompanied by dialogues between two people who become increasingly estranged during the course of a journey.

In Ana Torfs’ work the spoken words and the static pictures blend in order to create an imaginary realm beyond cinema. Personal experiences and global dimensions merge with one another.

This also comes across in the new photographic series "Family Plot". Portraits of Carl Linnaeus and other representatives of early scientific botany refer to the practice of naming of exotic plant families in which foreign species were appropriated in an imperialistic way.

Ana Torfs has been practising and developing her method of subtly dissecting and superimposing places, people, voices and atmospheres for over fifteen years. In doing so, she draws from the repertoire of dramatic, photographic and cinematic techniques.

The spatial transfer of places and stories is a basic aspect of Ana Torfs’ artistic approach.

Consequently, the settings in which her works are shown and experienced by her audience are of great importance. Ana Torfs cooperated with the Belgian architect Kris Kimpe in order to design a special kind of architecture for the presentation of her works at K21.

In addition to the exhibition, Ana Torfs’ 35mm film
"Zyklus von Kleinigkeiten (Cycle of Trifles)" (b/w, 1998, 86’) will be showing in cinema.
The film is based on Beethoven’s so-called conversation books which give an insight into the deaf composer’s day-today life.

This exhibition was organized in cooperation with the Generali Foundation, Vienna.