For this exhibition, Stefen Bruggemann presents Headlines & Last Line in the Movies, a site-specific installation that covers the gallery walls with mirrored panels. 'Reading Dante III' draws inspiration from Dante's fourteenth-century Divine Comedy, a reoccurring topos of Joan Jonas's work since 2007. Each performance and installation becomes increasingly layered as the work transforms and develops. 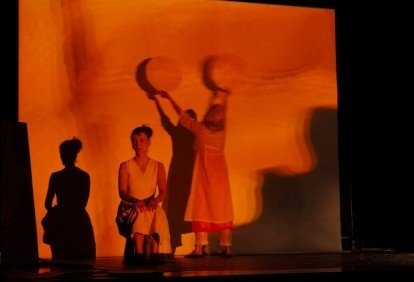 Yvon Lambert New York is pleased to present an installation by acclaimed American artist Joan Jonas. This show will run concurrently with an exhibition of new work by Mexican artist Stefan Brüggemann. Both exhibitions open with a reception for the artists on Saturday, February 27, 2010 from 6-8pm and will be on view until April 10, 2010. Jonas will also have a show on view at Location One in Soho opening March 19, 2010 from 6-8pm and on view until May 8, 2010.

This exhibition marks Jonas’s third at Yvon Lambert. Reading Dante III draws inspiration from Dante’s fourteenth-century Divine Comedy, a reoccurring topos of Jonas’s work since 2007. Each performance and installation becomes increasingly layered as the work transforms and develops. The first installation and performance of Reading Dante was at the 2008 Biennale of Sydney. Later that year Jonas performed the work at the Yokohama Triennale, and also performed a reading at The Isabella Stewart Gardner Museum in Boston, from which filmed excerpts are now incorporated into the current Dante video. Jonas was featured in the International Pavilion of the 2009 Venice Biennale where she installed Reading Dante II. Most recently, the artist presented Reading Dante II at the Performing Garage in New York as part of Performa ’09, and selected elements of this performance are featured in Reading Dante III. Jonas translates the medieval allegory, borrowing small fragments of the text and greatly reinterpreting the story through performance, sound, drawings, video and installation. The artist dynamically visualizes the journey of the characters, merging their experience with her own through footage of travels and performance. The plethora of elements employed by Jonas, which initially may seem disparate, collectively form a complex, choreographed, and imaginative vision in the artist’s personal aesthetic language.

Joan Jonas (b. New York, 1936) is a seminal figure in American post-war contemporary art. The artist works in several mediums including: performance, installation, video art, sculpture, filmmaking, photography and painting. She received her BA from Mount Holyoke College in 1958 and her MFA from Columbia University in 1965. Jonas currently teaches at the Massachusetts Institute of Technology (MIT). In 2009 the artist was awarded the Guggenheim’s first annual Lifetime Achievement Award. Jonas has had retrospectives at the Queens Museum of Art, New York (2003), Staatsgalerie, Stuttgart Germany (2000), and at the Stedelijk Museum, Amsterdam (1994). The artist has been represented in Documenta V, VI, VII in Kassel, Germany. She was commissioned to develop an installation and a subsequent performance entitled Lines in the Sand for Documenta XI. It was recreated at the Tate Modern in London, and the Kitchen in New York in 2004. Jonas has also exhibited in solo shows or performed at institutions such as: Haus der Kulturen der Welt, Berlin; Sigmund Freud Museum, Vienna, Austria; Dia:Beacon, Beacon, New York; Museo Nacional Centro de Arte Reina Sofia, Madrid, Spain; Museu d’Art Contemporani de Barcelona, Spain; Le Plateau and Jeu de Paume/ Hotel de Sully, Paris, France; Renaissance Society, University of Chicago, Chicago, Illinois.

Yvon Lambert New York is pleased to announce Headlines & Last Line in the Movies, an installation by artist Stefan Brüggemann. This show will run concurrently with the exhibition Reading Dante III by Joan Jonas. Both exhibitions open with a reception for the artists on Saturday, February 27, 2010 from 6-8pm and will be on view until April 10, 2010. Brüggemann explores a variety of mediums including sculpture, video, painting, and drawing. He frequently employs text, demonstrating a pop aesthetic while maintaining a critical attitude towards the sociological context from which it is derived. For this exhibition, Brüggemann presents Headlines & Last Line in the Movies, a site-specific installation that covers the gallery walls with mirrored panels. On these mirrors, written with spray paint, are a list of recent newspaper headlines and a selection from the final dialogue of dramatic movies. A series of fluorescent light sculptures mounted upon the ceiling by Brüggemann illuminates the exhibition.

Myriad contrasts and communalities are revealed within this work. Brüggemann selects text from both newspapers and the cinema, therefore juxtaposing reality and fiction. Both movies and the news are important reflections of our culture that not only influence, but also manipulate the public’s comprehension of society. To the artist, the text of Headlines & Last Line in the Movies function as maxims, seducing our innermost unconscious. Stefan Brüggemann (b. 1975, Mexico City) currently lives and works between Mexico City and London. His recent solo exhibitions include: Black Box, curated by Philippe Pirotte and Eva González-Sancho, Kunsthalle Bern and Frac Bourgogne, Dijon, France, 2008. Recent group exhibitions include: Escultura Social: New Generation of Art from Mexico City, MCA, Chicago, 2007; Nothing, Schirn Kunsthalle Frankfurt, 2006; Off-key, curated by Philippe Pirotte, Kunsthalle Bern, Switzerland, 2006; and Beck’s Futures Award, ICA, London, 2006. Recent publications include: JRP Ringier publication edited by Nicolas de Oliveira with essays by Chris Kraus, Michael Bracewell and Caoimhín Mac Giolla Léith.