Listen to your eyes

As part of Diagonales: sound, vibration, and music 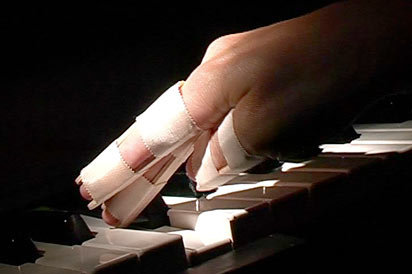 The exhibition Listen to your eyes is the first event in the series. Diagonales : son, vibration et musique (Diagonals : sound, vibration and music) originated by Centre national des arts plastiques (CNAP), combines visits to exhi­bitions in ten regions in France, as well as in Benelux, and brings together 20 contemporary art centers around a common issue: the place of sound and music in contemporary creation from the 1960s to the present, as seen through a selection of works from the Centre national des arts plastiques.

Listen to your eyes is a twofold exhibition shown simultaneously at 49 Nord 6 Est – FRAC Lorraine and at the École Supérieure d’Art de Metz Métropole (ÉSAMM). This exhibition was, in the first place, a site-specific work, conceived and produced for the event: a silent, luminous injunction of an eponymous piece by Maurizio Nannucci. On the roof of É SAMM, overlooking the city, made itself at home Nannucci’s Listen to your eyes.

Praise of silence, paradoxically, by those who are confined to it and by those who seek it to better overcome it. A selection of works in­citing us to get rid of our automatisms and preconceptions, to detach ourselves from the norm, and to open up onto possibilities. Accustomed to the sound of words, we often forget the value of silence. And, let’s admit, most often, silence seems an impasse that language allows us to break through. But does silence really say nothing? Since the antiquity, philosophers, from Plutarch to Heidegger and Wittgenstein, have taught us the possibility of speech which resides in silence and leads to a “pure state” of communication. But we are so used to noise that we find it difficult to express our­-selves without words, without sounds, with no hearing.

Being silent to make room for the speech of gestures—that is the experience FRAC Lorraine invites you to share, in the intimacy of works which prove our capacity to communicate in a different language. There exist alternatives to chatter and prattle: These works, in fact, loudly proclaim the existence of a universal gestural language, a natural body language—language of positions and attitudes which reinforce speech and articulate meaning better than words.

This observation entails the question of memory. How can we transmit memory without relying on words? To bring order to temporal events, we need some sort of representation. The work of On Kawara starts out by questio­ning time and its “inhuman” scale.

The works shown at ÉSAMM accompany the exhibi­-tion presented at 49 Nord 6 Est – FRAC Lorraine, and try to convey silence and rhythm through image and space. But what about sound space? Isn’t silence the rhythm of musical notation? A silence is a moment during which no sound is emitted, and it corresponds to a pause in the execution of a musical piece. As do musical notes, each interval of silence has its symbol: silence can be written.

It is also a surfacea in motion—a rhythmic surface where sounds encourage listening, as in Julije Knifer’s murals which invite an infinite visual wandering. Representations of the invisible, the featured works let the exhibition room vibrate with silent rhythms. The visitor is in a state of visual listening. And meanings are in the state of maximal reception.