An ongoing dialogue between the two painters 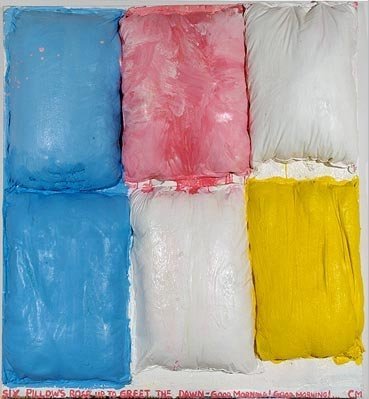 Mitchell-Innes & Nash is pleased to present a two-person exhibition of New York painters Joe Bradley and Chris Martin in the Chelsea gallery from February 25 – March 27. Both artists will present a group of new works. The exhibition was conceived as part of an ongoing dialogue between the two painters.

JB: … You know, wishful thinking is the way things start. It kind of seeps into reality after a while.

CM: I wish we could all wish for not knowing what we are doing. But in a good way. I think there's a sense of freedom that comes from everybody not being too sure what they're doing. Someone once said about New York in the early 1950s, late '40s, after Expressionism was sort of bursting onto the scene, "There was a moment, maybe six weeks or so, when no one had any idea how to make a painting." And that's a lovely idea, that we don't know what we're doing…

JB: There's this Guston quote that I think is brilliant, that when you're in the studio, your friends and family are there and the ghosts of art history are there, your contemporaries are there. If you stay long enough they all leave, and if you're lucky you leave...

JB: It's really hard to articulate but I do think that that's the place to be when you're making art. I mean you need one foot on turf, on land, and one foot in the cosmos.

JB: The stuff that always sticks with me is the work that I see and I'm like, "I want to make something." You know what I mean? You're allowed to keep doing it. It's not like an end game sort of thing where this is throwing down the gauntlet. You know, it is open-ended.

CM: Yeah, that's right. God, we sound like a couple of old Beats. If you are reading this now, we don't know what we're talking about, and we don't know where this is going. Just like our best paintings.

The above dialogue is excerpted from an interview published in The Journal in Fall 2009.

Joe Bradley was born in 1975 and lives and works in Brooklyn. He received his BFA from the Rhode Island School of Design in 1999. He has had solo exhibitions at P.S.1 Contemporary Art Center and Canada in New York, and at Peres Projects in Los Angeles and Berlin. His work was included in the Whitney Biennial in 2008. He is represented in New York by Canada.

Chris Martin was born in 1954 and lives and works in Brooklyn. He received his BFA from the School of Visual Arts and attended Yale University. Recent group shows have included "Abstract America" at the Saatchi Gallery in London, "Painting as Fact – Fact as Fiction" at de Pury and Luxembourg, Zurich, and "The Painted World" at P.S.1. His work is represented in the collections of the Corcoran Gallery in Washington, D.C. and the Museum of Contemporary Art, Chicago. He is represented by Mitchell-Innes & Nash.