The event invitees to solo and thematic group shows presented alongside museum-quality programming, collector tours, screenings, and special events. 'Markt' features a range of designers whose work cross-pollinates with the art world. In addition, to further support the creative positioning of Scope 2010 Markt, a series of installations will be organized in collaboration with exhibiting designers and leading figures in art and fashion. 'Political Revolution in My Basement', curated by Martha Colburn features a selection of films and videos by contemporary international artists. 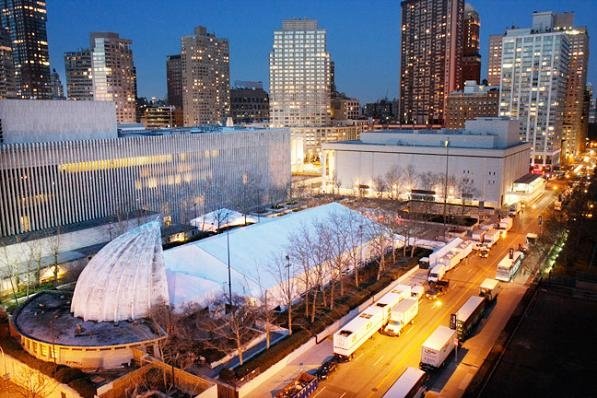 Introducing artists, curators, and cutting-edge galleries to new audiences internationally has made SCOPE the most comprehensive destination for the emerging art world available anywhere. With art fairs in Miami, Basel, New York, London, and the Hamptons, SCOPE is proud to be an influential presence in the expanding global art market.

About Markt
SCOPE Miami 2009 saw the launch of SCOPE Markt, a fashion focused exhibition that drew high acclaim. SCOPE New York 2010 will see the second incarnation of "Markt" with the appointment of Diane Pernet, a leading fashion journalist and the creator of 'A Shaded View on Fashion' blog and film festival. "I was very excited when I heard about the SCOPE project because what interests me the most now is the interaction between fashion, art and film," says Diane Pernet. "There are many designers that just make clothes and there are others who are linked to art and creation. Their work blurs the boundaries of what is normally considered art or fashion. In addition to the fashion/art curation I will be screening a selection of out of competition films from the second edition of ASVOFF. I have two main loves, fashion and film and this exhibition gives me the opportunity to combine the two." Markt will feature a range of designers whose work cross-pollinates with the art world. In addition, to further support the creative positioning of SCOPE 2010 Markt, a series of installations will be organized in collaboration with exhibiting designers and leading figures in art and fashion.

Mission Statement
You know, fashion is either put on a pedestal or hung on a hanger. How did that happen? What's on the racks can sometimes be touching but it's seldom thrilling. The most bewitching fashion only ever leaves the catwalk when it's lifeless in a magazine or suffocating in a glass box at some museum. I don't know if fashion is necessarily art but I do know that it deserves to be inhabited by people who ache for it the same way others do for art. What's not fair is that great contemporary art is for sale while great contemporary fashion usually isn't. So this was my motivation when curating The Scope Contemporary Fashion Fair. You can step back and contemplate these pieces like meaningful sculptures or you can buy them and wear them like they ultimately should be. The point for me is that at least they will be accessible to an engaging audience - and hopefully a real life client - not just for someone studying them through the prism of an abstract image. They're close enough to devour and they're ready to be consumed. Just like art.
- Diane Pernet
Markt Curator & Founder of ASVOF/ A Shaded View on Fashion

Martha Colburn was born in 1971 and raised in the Appalachian Mountains of Pennsylvania (USA). Based in Holland and New York since 2000. A self-taught filmmaker, she has completed over 40 films since 1994. Based in Baltimore, Maryland in the 90's, she self-released six records and toured American and European cinemas and music venues with her work. In 2000 she moved to Holland for the Rijksakademie Van Beeldende Kunst art residency, where she created installations, prints and paintings which were presented in Europe, China and New Zealand art institutions. Her films have screened successive years in Sundance, Rotterdam and New York Film Festivals and In the Fortnight of New Directors at Cannes Film Festival in 2005. Recently she contributed animation to Jeff Feuerzeig's documentary "The Devil and Daniel Johnson". Her work has shown in the Whitney Biennial (2006), Centre Pompidou, Andy Warhol Museum and the Museum of Modern Art (NY). She has collaborated with musicians Jad Fair, Eye Yamatsuka, and Deerhoof on her soundtracks and self-released 6 albums of her own music.

A Shaded View on Fashion Film shakes up the old rules of fashion by putting the focus on the moving image, in an industry long dominated by the "still" photographic medium. In the time of digital, film has become the freshest way for fashion makers to draw attention to their work. Revolving around a selection of short films, the common thread is the use of fashion, beauty and/or style; a study in the drama, power and personification that fashion evokes and commands on screen. Since its premier in 2008 at the Jeu de Paume National Gallery, the program of short films has traveled to institutions like the Guggenheim Bilbao, Cinema Rise X in Tokyo, the Chelsea Arts Club in London; fashion events such as AltaRoma in Rome and many others around the world - Seoul, Riga and Mexico City to name just a few; and screenings at festivals like Hyeres, Festival 9 in Vienna and the Arnhem Biennale.

interrupt verb [ trans. ]
1 stop the continuous progress of (an activity or process) : the buzzer interrupted his thoughts.
- stop (someone speaking) by saying or doing something : "Of course..." Shepherd began, but his son interrupted him | [with direct speech ] "Hold on," he interrupted.
2 break the continuity of (a line or surface) : the coastal plain is interrupted by chains of large lagoons.
- obstruct (something, esp. a view).

ORIGIN late Middle English : from Latin interrupt- 'broken, interrupted,' from the verb interrumpere, from inter- 'between' + rumpere 'to break.'

The artistry of interruption is best experienced in New York City's Chinatown district, where one is incessantly inundated with all levels interruptions; pushy street vendors, distressed children, screeching traffic, fortune tellers grabbing you by the left arm while bookies in secret shops grab your right arm in attempts to convince you to bet against the Jets. With so much over-stimulation it's a miracle that our ears still perk up at even the faintest whispers in this neighborhood, as though we were waiting to hear something meaningful. "Gucci? Prada? Rolex...Rolex?" Camouflaged amongst Chinatown's congestion, it's very easy to walk right by one of tens of dozens of secret hawkers, passive aggressively trying to push the the latest knock-off Chanel clutch. However unlike everything else happening in Chinatown, individuals actually come from all over New York and abroad to seek out these vendors. They hide in alleys promising good bargains, concealing their counterfeit goods in large black garbage bags or suitcases with wheels; that allow for a quick get-away from the authorities. The most inventive of these vendors will lead you into their storefront shop, which appears to sell perfume, belts, scarves and video-games, into a back-room or a basement. Those brave enough to venture this far in are rewarded with knockoffs of the highest quality.

In collaboration with the MFA film program at Columbia University Mehra and Park present a day of film and hyperreal installation based on the technique of interruption; that is the idea to create a break or freeze of what is currently happening forcing a change in direction or thought.

The collaboration will unfold simultaneously. The first part is a hyperreal installation specifically created for the SCOPE Art Fair and aptly titled The Interruption ['10]. The intention is to create an installation where it becomes difficult to distinguish between reality and fantasy. Multimedia artist Mehra, will install 25 performers who will situate themselves throughout the fair and attempt to hawk masterpiece counterfeit works of art. Much like the hawkers in Chinatown they carry large black garbage bags, suitcases, dress in dark plain clothing and most importantly, all be of the same ethnicity. Do we shy away from these men or report them to security as we begin to notice one after the other? Are we afraid of our misconceptions? Or during these recessionary times do we rush over to buy knockoffs and score a deal at the fair? Although it is in sharp contrast to the method which Mehra usually presents her work, the intentions are similar: to question ideas of cultural identity, race, and our preconceived notions of the other.

The second component to the collaboration are films from Columbia's MFA Film department; a program curated by Rammy Lee Park and Divya Mehra. The program experiments with narrative storytelling, creating extraordinary tales out of imagined experiences. A few of the chosen works include, Recess ['09], which attempts to explore teenage rebellion, pinpointing the exact moment in a girl's life when childhood is violently interrupted to make way for adult responsibilities. At Night I Wake To Dream ['08], touches on an active dream-life used as a means to escape reality - but reality will always interrupt fantasy. These, along with a few select works, impose interruptions in multiple ways to reveal fragile inner desires and offer varied interpretations of what it means to be interrupted, or to interrupt.

All filmmakers and artists involved are candidates for or graduates of the School of the Arts at Columbia University.

This season, SCOPE presents the PDA, a unique participatory project from artist Lilah Freedland, benefiting the Scope Foundation. During the PDA, participants have the opportunity to bid on experiences like a private lesson with a top chef, a personal tour of the Columbia Brain Science Lab, a lesson in pyrotechnics, a session with the pied piper of screen printing, or lunch with a top financial planner.

The silent PDA will culminate Saturday afternoon in a Live Auction of Personal Favors. Proceeds from the auction go to the SCOPE Foundation to support artist projects. Upcomming and recent projects include: ArtFarm, an artist residency on a working farm, where artists work in the studio and in the field to contribute food and inspiration to weekly farm dinner events and goods; The Arctic Circle, a series of artist-led expeditions to The Arctic Circle aboard a traditionally rigged sailing vessel; and The Girl Project, which explores the lives of American teenage girls through photographic images they create themselves.
The mandate of the SCOPE Foundation is to help emerging contemporary artists, musicians and curators through grants, awards and acquisitions. This artist-driven 501(c)(3) was launched to fund and promote emerging contemporary art in and out of the traditional marketplace. The SCOPE Foundation provides everyone with the opportunity to be a philanthropist.

The mandate of the SCOPE Foundation is to help emerging contemporary artists, through grants, awards, and acquisitions. SCOPE is dedicated to not only supporting the international up-and-coming artistic community, but local schools and not-for-profit arts institutions.