While Bodies Get Mirrored

This group exhibition brings together works by international artists that thematise the relation of tension between movement and space, and in so doing take up and reactivate a formalist vocabulary of signs. One focus of the show is the influence of (post) modern dance and choreography in contemporary art. Another theme is the re-presentation of the performative, and the notation of movement and dancerly activities through the most varied media, ranging from classical photography and the filmic through to the sculptural and installative. 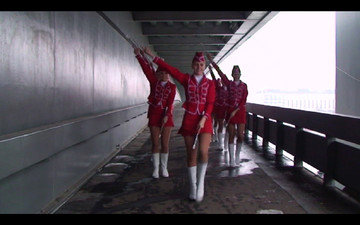 This group exhibition brings together works that thematise the relation of tension between movement and space, and in so doing take up and reactivate a formalist vocabulary of signs. One focus of the exhibition is the influence of (post) modern dance and choreography in contemporary art. Another central theme is the re-presentation of the performative, and the notation of movement and dancerly activities through the most varied media, ranging from classical photography and the filmic through to the sculptural and installative.

Early post modern dance and its postulation that "every movement is part of a dance and every person is a dancer" can be read on the one hand as an historical bridging moment to modernism, but also, on the other, as a moment that links the exhibited positions in this exhibition. In post modern dance, the legacy of formalist expression of movement has been applied and further developed, in a reaction to contemporary visual arts. In the last few years there has been an increased interest by younger artists in resuming and rediscovering this avant-garde movement of the early 20th century – the formal-aesthetic as well as the social perspective. The formal-aesthetic perspective entails moments of mirroring, reflecting, coruscating, and the dissection of complex forms surveyed in their simple geometric elements, and becomes an important expressive tool in a formal language.

The thirteen international positions exhibited in the exhibition register the differing applications and various functions of content in such a language. In their video works Delia Gonzalez (born 1972, USA), Hanna Schwarz (born 1975, Germany) and Kelly Nipper (born 1971, USA) record well-quoted dance movements live, and often extend them into a spatial context. In this way, Gonzalez creates the spatial production of a stage situation, in which she presents her film (Not yet titled, 2010). The political potential of movement is also investigated, for instance by Anetta Mona Chişa (born 1975, Romania) & Lucia Tkáčová (born 1977, Slovakia), who in their video work Manifesto of Futurist Woman (Let's Conclude) (2008) feature majorettes marching in front of the video camera, disseminating the "Manifesto of the Futurist Woman" through a language of signals. Anna Molska (born 1983, Poland), Mai-Thu Perret (born 1976, Switzerland) and Paulina Olowska (born 1976, Poland) also investigate such socio-political approaches. By grappling with dance and movement in their works, they attempt to establish a kind of "social choreography" (Andrew Hewitt). William Forsythe (born 1949, USA), Martin Soto Climent (born 1977, Mexico) and Julian Goethe (born 1966, Germany) extend into the sculptural field with their works, and investigate the solidification of movement. This is revealed by Forsythe in his spatial sculpture The Defenders Part II (2008), an arrangement of over seventy mirrors wedged into one another on a red carpet as a performative object. The work A Study in Choreography for Camera (1945) by Maya Deren (1917-1961) serves as an historical example; the artist demonstrated a very early interest in the synthesis of film and dance in her creations. During the 1970s and 1980s, experimental film maker Babette Mangolte (France/USA), gave numerous performances documented by, amongst others, Trisha Brown, Yvonne Rainer and Richard Foreman, which were concerned at length with the question of representing the performative. Silke Otto-Knapp (born 1970, Germany) often takes documentation from ballet productions as source material for her painting. Here, her monochrome pictures focus on the moment of movement of the figure, and condense it.

Performance by Kelly Nipper: Saturday, 17th April Kelly Nipper will present a performance in the museum, created in conjunction with the video installation she is displaying in the exhibition.

Screening "Dancing by myself": The screening on Thursday 6th May is dedicated to solo dance throughout the 20th century. Amongst those featured are dance films by: Trisha Brown, Isadora Duncan, William Forsythe, Loie Fuller, Miriam LaVelle, Erna Ómarsdóttir.

Catalogue: in connection with the exhibition, a detailed anthology entitled Zwischenzonen (Between Zones) will be issued in June 2010, discussing and furthering the current exhibition, as well as the exhibition While Interwoven Echoes Drip into a Hybrid Body – An Exhibition about Sound, Performance and Sculpture (2006). The central issues of this discussion are intersections/overlaps, and the folding or rolling into one another of the performative and various art categories such as sculpture, installation and film. With texts a.o. by Philip Auslander, Raphael Gygax, Kristina Köhler, Verena Kuni, Babette Mangolte, Heike Munder.

The migros museum für gegenwartskunst is an institution of the Migros Culture Percentage.