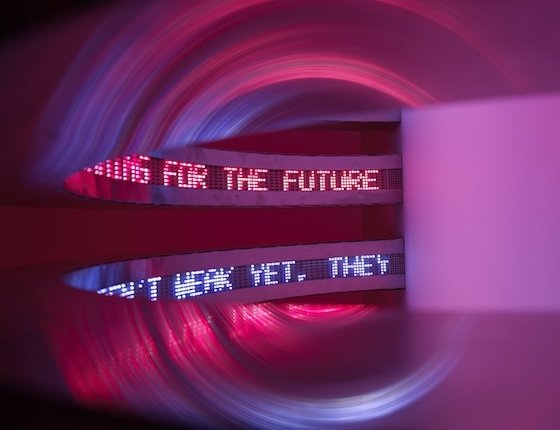 Jenny Holzer is one of the most acclaimed artists working today . In the 1970s she began to use text as art, creating provocative writings displayed and distributed through means akin to the mass media – on fly posts, T-shirts and, in 1982, an LED billboard in New York’s Times Square.

Encountering Holzer’s texts and works in galleries and in public spaces, viewers are confronted by startling, anonymous messages that present multiple points of view and ways of being. For the last thirty years, Holzer has used a variety of forms, such as LED signs, sculptures, and paintings, to embody writing. From 1977-2001, Holzer composed thirteen text series (including Truisms and Inflammatory Essays). She has also incorporated poetry and writing by others into her practice and, since 2004, has made the inclusion of government documents central to her work.

The exhibition is accompanied by a fully illustrated catalogue, available from BALTIC SHOP, with essays by Elizabeth Smith and Joan Simon and an interview with Holzer by Benjamin H.D. Buchloh.

The exhibition is co-organised by the Fondation Beyeler, Riehen / Basel, Switzerland, and the Museum of Contemporary Art, Chicago. Major support for the exhibition is provided by Donald and Brigitte Bren, Anne and Burt Kaplan, The Andy Warhol Foundation for the Visual Arts, and the National Endowment for the Arts.