The exhibition, titled Grand Est, concludes the program by presenting the work of the participating students, who act indirectly here as representatives of this geographical zone. The works presented in the exhibition investigate notions of context and structure. Curated by Fanny Gonella. 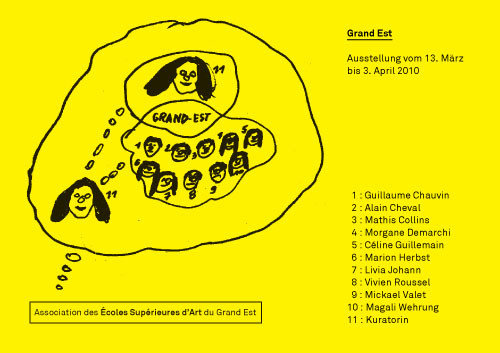 Between October 2009 and March 2010, the Master Class program initiated by the art schools of the French greater East took place for the first time. Students from the Art Schools of Besançon, Chalon-sur-Saône, Dijon, Epinal, Metz, Mulhouse, Nancy, Reims and Strasbourg met with the curator Fanny Gonella, who then invited ten of them to work together in this context. The exhibition, titled Grand Est, concludes the program by presenting the work of the participating students, who act indirectly here as representatives of this geographical zone.

During the seminars, certain questions emerged repeatedly particularly regarding the position and role of each participant in relation to the group structure. This group structure integrated the students into a new set-up that was simultaneously related to their art schools as well as independent from them. The Master Class is built up on the structure of the association of art schools that support this project, as well as on the one of the work accomplished in common, as well as on the geographical context that underlies the program’s existence.

In response to this new working situation, the works presented in the exhibition investigate notions of context and structure. The students explore both the structure of the art school, which allows students to develop their artistic practice, as well as structures at work in the art world at large, to which they are expected to adapt and conform. The works presented in Grand Est constitute a reflection on these questions and on the conventions of how an artist is expected to present him/herself.

Mathis Collins built a structure that is at the same time an object and a scene, displaying the behavior of what one could consider as the archetype of a young artist. Similarly, Livia Johann displays in the space indications of movements inspired by the physical constraints imposed by modernism in the films of Jacques Tati. Guillaume Chauvin points out the apparent neutrality of the structure of the biographies of the participants in this exhibition, which is used to identify them, whereas Morgane Demarchi materializes the interchangeable nature of exhibition spaces.

Showing their work in an unfamiliar space in Berlin led the artists to reflect further on the legitimacy of the presence of one’s work in a place to which the artist has no direct relationship. Reacting to this situation, Magali Wehrung built a structure which offers visitors local cuisine from the regions in France where the artists reside. In turn, Mickael Valet collected natural elements such as leaves and branches in Berlin, which he then displayed in his work. Thus they both establish a link between their work and the location where it is shown.

By questioning the structural elements involved in the presentation of artworks, such as pedestals, both Marion Herbst and Céline Guillemain insist on the role of verticality in a structure that is supposed to heighten the attention on an object in order to promote it. Further works also deal with the function of this type of structure and articulate the link between the pedestal and public acknowledgment, as in the pieces of Alain Cheval and Vivien Roussel.

This exhibition is the culmination of 6 months of reflection on the part of the participants as a group. Most of them are in their last year of art school, finding themselves at the treshhold marking the transition of their status from student to artist. The works shown here materialize this transitional moment.

With the kind support of the Association of the French Régions from the greater East and from the Institut français – Bureau de la création artistique – Arts plastiques.