A major solo exhibition devoted to the art of Anish Kapoor, one of the most influential sculptors working today. The exhibition, which opened to enormous acclaim at the Royal Academy of Arts, London, in fall 2009, is the first large-scale survey of Kapoor's work to be seen in Spain. The exhibition has been organized in close collaboration with the artist, who envisions each gallery as a single experience devoted to one series (the pigment works, the void works, polished stainless steel works, the entropic cement forms), or one large-scale installation. 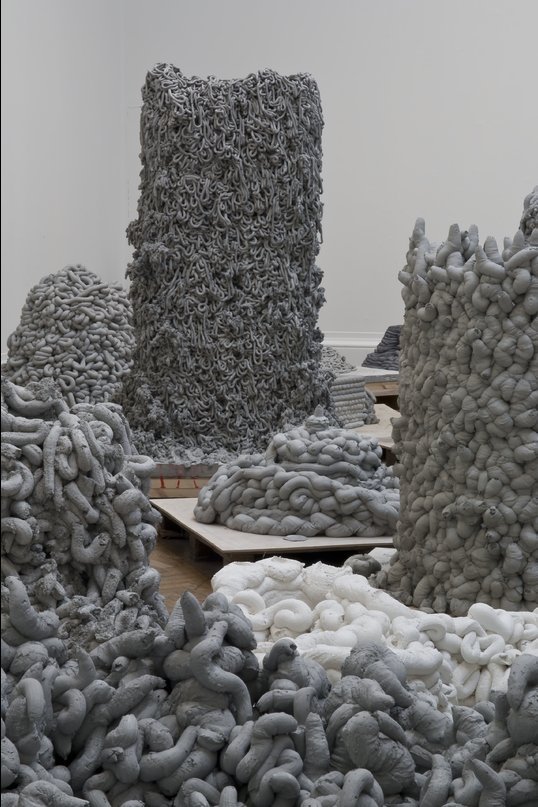 Curated under the direction of Alexandra Munroe

The Guggenheim Museum Bilbao is delighted to present the first large-scale solo exhibition in Spain dedicated to the work of Anish Kapoor. Over the past thirty years, Kapoor has gained international acclaim as one of the most influential and significant artists of his generation. His exploration of form and space and his use of color and material have profoundly influenced the course of contemporary sculpture.

Organized by the Royal Academy of Arts in London and the Guggenheim Museum Bilbao, the exhibition, conceived and installed in close collaboration with the artist, offers insight into Kapoor’s working method and creative process, and includes twenty major works from several series spanning the 1970s to the present.

Installed throughout the Museum’s second floor, the exhibition presents a series of visual and psychological experiences that draw us into the artist’s search for a poetic sculptural language. This exhibition originated at the Royal Academy of Arts where it was curated by Jean de Loisy, independent curator, and Adrian Locke, Exhibitions Curator, Royal Academy of Arts. It was installed at the Guggenheim Museum Bilbao under the curatorial direction of Alexandra Munroe, Senior Curator of Asian Art, Solomon R. Guggenheim Museum.

Pigment Works
The earliest sculptural series on view in the Guggenheim Museum Bilbao are composed of powdered pigment applied to geometric forms that seem to emerge from the Museum’s walls and floor.
Completed between 1979 and 1984, this body of work began as an experimentation in color as material through the use of pigment. Out of this, Kapoor’s first series of work 1000 Names emerged. The clarity and purity of these works had an immediate impact. Both natural and abstract in form, these objects seem to have grown through the floor and walls of the gallery. The works give rise to the idea of the self-generated object, that which exists without author. "I was trying to arrive at something which was as if unmade, as if self-manifest, as if there by its own volition," said Kapoor.

On the void
Following the early pigment pieces, Kapoor decided to excavate the object. Adam (1988–89) and Untitled (1990) exhibited here, are two key examples of Kapoor’s early exploration of the void. The notion that emptiness can make a space more full was a key conceptual discovery for Kapoor. "It seems as though by emptying the form, taking everything out of it somehow the space does not become empty, it seems to fill up. I felt that it was a moment of a great discovery. That emptying out was filling up, for that matter, and that what filled it was a sort of darkness. A darkness of mass, an inner darkness and of course, a sort of psychological darkness."

Yellow, 1999
Yellow (1999) is a monumental work in which Kapoor uses color as an instrument to embrace and subvert form. A great gaping belly recedes deep into the yellow wall. The sheer scale of the work and its monochrome state fill the viewer’s vision, blurring the boundaries between space and form, between what we think we know and what we perceive. It is as though color exists as a state of being, or a condition.

Non-Objects
Kapoor’s desire to expand the scope of sculpture beyond its physical boundaries led to his work with mirrored surfaces. A large Gehry gallery is the venue for an installation of polished stainless steel sculptures that only seem to come to life as real objects when its visitors’ active images are reflected on their surfaces. In works such as Turning the World Upside Down, Gold (2009), the mirrors’ concave surfaces invert the reflections of the passers-by, distort sound waves around them, and change the space they occupy.

My Red Homeland, 2003
A vast landscape of red, My Red Homeland (2003) consists of a metal blade driven by a motor which moves almost imperceivably around an open circular container filled with twenty-five tons of blood-red wax, giving viewers the impression of an optical illusion, as though the mass of red wax were moving from the inside to the outside of the installation.

Shooting into the Corner, 2009
This work was first exhibited in Vienna, the city in which Freud established psychoanalysis. Relentless and repetitive, a cannon is fired at twenty-minute intervals into a corner. The shells of wax will accumulate in the corner over the course of the exhibition, eventually amassing around thirty tones. The drama of Shooting into the Corner takes place in a space set apart, rather like a ritual arena in which a symbolic act of violence is allowed to occur.

Again, the hand of the artist is removed, replaced by a machine, further emphasizing the freedom the artist bestows upon observers to interpret these pieces. In the Duchampian tradition, Kapoor considers the viewer’s interpretation essential to the work of art.

Greyman Cries, Shaman Dies, Billowing Smoke, Beauty Evoked, 2008–09
The most recent of Kapoor’s works, this body of cement sculptures is generated from a new and specifically developed technological process. A computer-controlled three-dimensional printer excretes cement following a preordained design formulated by the artist. Thus the means of production are subverted. The resulting objects challenge our traditional notions of form. From the architectural to the archaic, the bodily and the scatological, they are more akin to natural things than to those made by design.

Tall Tree & the Eye, 2009
Positioned in front of the Guggenheim Museum Bilbao at the North Pond adjoining the Nervion River, is the luminous work Tall Tree & the Eye (2009). Consisting of almost 80 stainless steel spheres, Tall Tree & the Eye multiplies its surroundings producing reflections that are fractal. Each sphere reflects not just itself and its neighbors but merges into its positioned landscape, reflecting the Museum’s silhouette and the architecture surrounding the piece in an endless process.
The angle of the images changes as the viewer’s gaze climbs up the sculpture. Thus, the artist expresses the transient nature of how things appear and through a complex use of light and shadows, of volume and space, makes us contemplate the instability of the visible world, bringing sky and clouds down to earth.

About the artist
Kapoor moved to London in 1973 to study art. He has lived and worked there since then. A graduate of Hornsey College of Art and Chelsea School of Art and Design, Kapoor’s first solo exhibition took place at Patrice Alexandra, Paris, in 1980. Kapoor’s international reputation was quickly established. He represented Great Britain at the 44th Venice Biennale in 1990 and won the Premio Duemila for the Best Young Artist. The following year, he won the prestigious Turner Prize. He has exhibited extensively worldwide, most recently at the Royal Academy of Arts in London, 2009, the Deutsche Guggenheim Berlin, MAK in Vienna and the Institute of Contemporary Art, Boston. This touring exhibition at the Guggenheim Museum Bilbao is his first large-scale solo exhibition in Spain.

Didaktika and catalogue
The exhibition is accompanied by the Didaktika section, which focuses on Kapoor’s urban projects, in which the relationship between architecture, the setting, the work of art, and the observer is crucial. On Tuesday, March 16 at 7:00 p.m., the artist and curator Jean de Loisy will take part in a colloquy on this artist’s exhibition in the Museum Auditorium. It will be introduced by Alexandra Munroe.

The exhibition is accompanied by an illustrated catalogue that reflects Kapoor’s artistic evolution and includes essays by Homi K. Bhabha, Jean de Loisy, and Norman Rosenthal, who investigate the philosophical connotations of the artist’s work. These essays are complemented by an anthology of earlier studies that complete an analysis of the place Kapoor occupies in both the history of contemporary sculpture as well as in the larger context of global cultural criticism.

The Guggenheim Museum B